Walnut oil is an edible oil that is obtained from de-shelled walnut kernels by the cold pressing or solvent extraction method. Walnut oil has been in use in its native form for cooking purposes to add a distinctive flavor to preparations. In recent times, the use of walnut oil has been present predominantly in cosmetics and personal care products for its excellent results. Walnut oil also fits the natural profile for product formulations. As such, the demand for walnut oil for cosmetics has been on the constant rise from the cosmetics and personal care segments.

In terms of volume, the conventional segment of walnut oil exhibits dominance over the other segments, consistently, which can be mainly attributed to its price and availability in different regions. The preference for an organic segment of walnut oil is also majorly observed in the walnut oil markets in developed regions over developing regions. This can be attributed to the spending capacity difference and the pricing of organic walnut oil. However, with increasing consumer spending capacity and the organic trend catching up, the organic segment is expected to exhibit robust growth over the forecast period.

The growing demand for walnut oil in the cosmetics and personal care sector is fueled by the growing awareness amongst general consumers towards its multiple benefits. Owing to the rise in the Internet culture, the ease with which information is available for home-made remedies for skin conditions and personal care has improved. This has led to consumers opting for medicinally beneficial oils like walnut oil for home-made personal care products. The growth in the demand for the native form of walnut oil has mainly risen due to this very reason.

An increase in GDP, globally, especially in developed countries, has resulted in walnut oil being viewed as a relatively affordable product with multiple health benefits, rather than an expensive product, thanks to the results that walnut oil provide. The increased awareness about the health benefits of walnut oil serves as one of the most influential drivers for the growth of the market over the forecast period. Owing to the increased demand, multiple cosmetic and personal care products manufacturers have incorporated walnut oil into their product formulations, resulting in business to business distribution being one of the most prominent modes of distribution for the walnut oil market. The use of walnut oil as a carrier oil has also been a supporting factor for the increase in its demand from the cosmetics and personal care industry.

Walnut oil has long been described as a nutritionally rich source of omega-3, omega-9, and omega-6 fatty acids. This has certainly been a driving factor for the demand for walnut oil for nutritional supplements. The nutritional form of walnut oil is available as soft gel capsules of walnut oil, which have been experiencing an increased demand, owing to the increased vegetarian population that cannot consume animal-sourced fatty acid supplements.

The processing cost of walnut oil has been one of the restraining actors for the walnut oil market. This results in the higher price of walnut oil in general, and consumers become more reluctant to make the purchase decision as compared to other edible oils. This can be witnessed more in regions with low dispensable income as compared to developed regions. 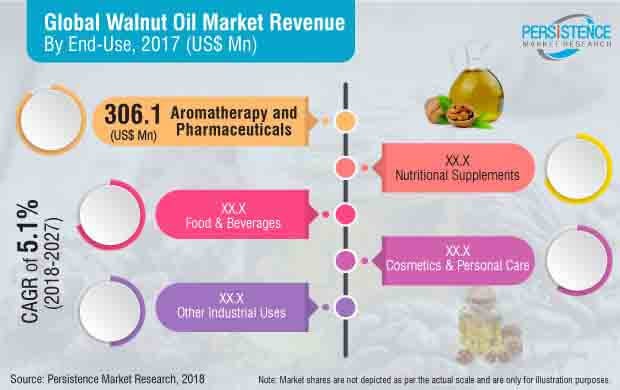 Due to all these factors, it is expected that, the global walnut oil market is expected increase positively in terms of value and volume during forecast period.

Walnut and its by-products have been in use for medicinal and cosmetic purposes since long, and walnut oil is one of the most prominently used walnut products. The prevalence of walnut oil as a natural ingredient in personal care and cosmetic products has witnessed an upward trend, and this is expected to continue over the forecast period. With increased consumer spending capacity and changing consumer purchasing patterns, the perception of walnut oil as an expensive product has been gradually changing, and this has affected the walnut oil market positively.

On the basis of regional segmentation, the market for walnut oil is segmented into five different regions: Latin America, North America, Europe, the Middle East and Africa, and Asia Pacific. Out of these, the North American region dominated the walnut oil market, and is predicted to continue to do so for a long period of time. The U.S. is the largest consumer in North America, for domestic and industrial applications as well. The U.S. is also one of the largest walnut producers in the world, but that doesn’t necessarily translate into walnut oil production, since a majority of walnut is exported to Latin America for cost feasibility in walnut oil processing. Increasing GDP in developing countries is enabling consumers to opt for walnut oil as a healthcare and personal care product. Europe, being a matured market for oils and allied products, is expected to lose its market share by less than 1% over the forecast period.

The rising demand for cosmetic products from developing countries, combined with the increased incorporation of natural oils into cosmetic products has proven to be one of the influential driving factors for the walnut oil market. Increased health food trends have also resulted in healthy oil being chosen for food preparation and dressings, one of them being walnut oil. This has certainly increased the demand for walnut oil from the food and beverages segment.

Increased consumer awareness resulting in an increased preference of consumers towards natural ingredients in cosmetic products, and an increased do-it-yourself trend have resulted in the demand for native walnut oil being surged in the market. Consumers prefer to purchase walnut oil and use it in its native form for personal care, rather than purchasing cosmetic products incorporating walnut oil. Apart from this, a healthy approach to food preparation has resulted in the increased demand for walnut oil from the food and beverage industry for use as dressings for salads and desserts. It adds to the nutritional value as well as provides a richer taste profile.