Latest updated offshore support vessel services market analysis by Persistence Market Research shows that demand recorded a Year-on-Year (YoY) growth of 6% in 2021, thus reaching a value of nearly US$ 11.7 Bn. During the same period, demand from the offshore oil & gas segment is projected to witness a Y-o-Y growth of over 8%.

As per Persistence Market Research, from 2016 to 2020, use of offshore support vessel services increased at around 2.3% CAGR, with the U.S., NORDICS, Brazil, China, and Canada holding significant share in the global market.

Historically, demand for Offshore Support Vessel (OSV) services has been driven by the offshore oil & gas industry. However, significant demand from offshore wind has been observed in recent times, which is due to increased focus by leading countries on renewable energy. Yet, the offshore oil & gas sector remains one of the prominent end-use industries for the market. Additionally, increasing platform supply vessel (PSV) fleet has further uplifted market growth in recent years.

For the installation and transportation of wind turbines, wind farm installation vessels are required. They are a robust type of offshore vessel compared to other complex-structured offshore vessels. For example, these vessels have to be big enough to carry offshore foundations, maneuverable enough to squeeze through offshore wind farms, and possess constructional capabilities to install wind energy foundations in any weather.

Despite expectations for a recovery in demand after 2020, the worldwide OSV market continues to struggle with utilization. Following a substantial drop in rig activities, FID cancellations/deferments, and considerable logistical issues created by the worldwide pandemic, forecasts for overall utilization of maritime support services declined 55% in Q1 2020 to 49% in Q3 2020.

Ship owners have been fast to stack idle fleets in an effort to cut operating costs, with worldwide lay-ups accounting for around 33% of total capacity.

Additionally, profitability of the service industry of OSVs is deeply affected by fluctuating prices of oil and gas. Drop in global oil demand caused by the global economy's lockdown in the aftermath of the COVID-19 outbreak led to a low cycle in the offshore market.

Why is Demand for Offshore Support Vessel Services Surging?

One of the primary drivers of the market is global marine time trade. Globalization and rapid expansion in the Asian economies of South Korea and China play a crucial role in the growth of maritime trade.

Another growth-inducing aspect is technological improvements in the production processes of OSVs and the integration of Dynamic Positioning (DP) systems in these vessels. Manufacturers are focusing on creating computer-controlled vessels that can operate their propellers and thrusters automatically to maintain a specific location. 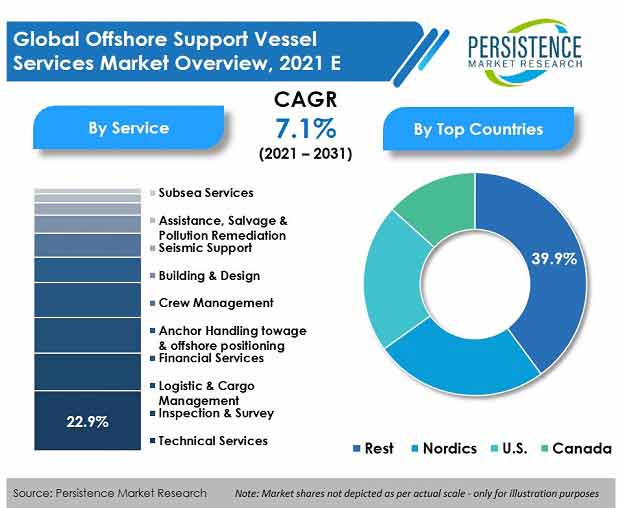 What are the Growth Prospects for the U.S. Market for Offshore Support Vessel Services?

The market in the U.S. was critically impacted by the COVID-19 pandemic, which caused laying down of OSVs and caused significant drop in offshore activities.

The market for OSV services in the U.S. is driven by falling drilling costs coupled with rising crude oil costs by OPEC, owing to which, offshore oil installations have expanded dramatically in the recent past, as has the number of offshore rigs. Furthermore, the industry is being influenced positively by growing trends in exploration and development efforts to maintain offshore production.

How is the NORDICS Region Driving Demand for Offshore Support Vessel Services?

The NORDICS market is anticipated to observe significant growth over the assessment period and anticipated to account for over 74% share in the Europe market on value basis by the end of the forecast period.

Norway accounts for a prominent share of global OSV services with the most modern offshore fleet. OSV companies prominently participate in petroleum, seismic surveys, and other activities for revenue generation in the country.

In the past decade, the OSV industry in the region witnessed tremendous growth, owing to which, this industry has become and a key segment of Norway’s maritime industry. Additionally, rising offshore wind energy installations will further drive market growth over the forecast period.

Why is China a Lucrative Market for Offshore Support Vessel Service Providers?

Increasing investments in offshore oil & gas drilling activities in the country have been the driving factor for the market. Additionally, regional manufacturers have been increasing their anchor handling fleet size since 2005, which has positively impacted the market in China.

According to Oceana Offshore S.A., Brazil has one of the largest deepwater oil reserves in the world, and today, only a small portion of these reserves are explored, demonstrating the great growth potential that exists in the country.

As the country’s pre-salt exploration costs are among the lowest in the world, oil exploration and production in Brazil will play an important role over the next few years. Therefore, the OSV fleet has been increasing since the past few years, and according to Persistence Market Research, Brazil is set to witness US$ 543.9 Mn absolute opportunity by the end of 2031.

PSVs will account for over 50% value share in the global market by the end of the assessment period. They transport supplies to oil platforms and return other cargoes to shore.

PSVs have a large deck and can transport all kinds of vital equipment for the offshore oil industry. These vessels also have a high sub-deck storage capacity and are fuel-efficient, owing to which, this type of OSV is quite popular among end users.

Which Service Type Generates Most Revenue in the Market?

End users such as offshore oil & gas, wind farms, military, and others frequently use technical services such as board safety training, engineering, underwater repairs management, condition-based monitoring, communications, and others

The offshore wind sector accounts for more than 29% value share in 2021. Increasing awareness regarding renewable energy has been the key driver for the offshore wind market. With rise of offshore wind power around the world, vessel owners and operators have more opportunities than ever to maximise revenues and expand their businesses in this industry.

Majority of companies focus on expanding their fleet presence and size. Strategies include innovation, collaborations with key players, partnerships, strategic alliances, and others

Similarly, recent developments related to companies providing offshore support vessel services have been tracked by the team at Persistence Market Research, which are available in the full report.

What is the size of the global market for offshore support vessel services at present?

The global offshore support vessel services market is currently valued at close to US$ 11.7 Bn.

What is the demand outlook for offshore support vessel services through 2031?

Demand for offshore support vessel services is slated to expand at 7.1% CAGR to reach a market valuation of US$ 23.2 Bn by 2031.

At what CAGR did the offshore support vessel services industry expand over the last 5 years?

What are the key trends being witnessed in this landscape?

Growing Inclination toward sustainability, lower operational costs, and lesser cost of capital and are key trends being observed in the market.

What is driving demand for offshore support vessel services across the world?

What is the market share of the top 5 offshore support vessel service providers?

Which are the top 5 countries driving demand for offshore support vessel services?

NORDICS, the U.S., China, Canada, and Brazil are driving most demand for offshore support vessel services.

At what percentage is the market in Germany expected to register growth in Europe?

The market for offshore support vessel services in Germany is projected to expand at around 7.7% CAGR through 2031.

Which countries are key providers of offshore support vessel services?

The South Asia agriculture equipment market is projected to expand at an impressive CAGR of around 9% over the forecast period of 2021-2031..

The demand for piling sheets, anchoring equipment, and trench shoring systems across the globe is anticipated to remain moderate during the forecast period, translating into an absolute incremental opportunity of approximately US$ 1,976.1 Mn over the forecast period..

Global rain water harvesting system market to expand at an impressive CAGR of close to 7% over the forecast period of 2021-2031..

Global market for dust control is expected to witness the moderate growth. Towards the end of the forecast period, i.e. by 2026 end, the global dust control market is estimated to reach US$ 18,783.1 Million revenue..