The global holographic film market is estimated to grow at a robust pace by the end of 2027, creating wide spaces of growth for the market players. High demand for packaging across different sectors is expected to drive this growth in the coming years. Accelerating demand for films embossed with security code is expected to boost the market expansion in the coming years. The pharmaceutical industry is estimated to surface as the leading end-use by the end of the forecast period.

Buoyed by the high adoption rate of advanced hologram technologies, the market in North America is expected to grow at a rapid pace in the coming years. Regions such as Asia Pacific, Middle East, and Africa are projected to exhibit fast-paced market growth through the forecast period. Established players in the global market include Nan Ya Plastics Corporation, Cosmo Films Limited, K LASER Technology Inc., Toray Industries, Inc., and Uflex Limited.

The global pharmaceutical segment is one of the rising industries which has successfully established its own entity in the global economy and is expected to surge in the forthcoming years. The worth of the global pharmaceutical packaging industry has grown manifold in the last few years. A massive wave of digitization has completely changed the face of the pharmaceutical industry in the last few years. Several advanced apps and varied digital platforms have escalated the end–user experience in many ways.

Medicine companies around the world are fighting hard to create proper and robust systems to counter the growth of counterfeit drugs. Pharma companies are rapidly incorporating new techniques to build a full proof packaging system to arrest the expansion of these forged drugs. The demand for holographic films will spike in the FMCG and medicine industry.

The holographic films can produce proper holographic tags that possess a unique counterfeit quality. The global holographic films market is expected to be valued more than US$ 11,000 Mn by the end of 2024. The sales revenue is estimated to increase at a CAGR of 9.3%. FMCG and Pharmaceuticals segments in the end use industry are projected to be the fastest growing segments, registering CAGR of 10.2% and 10.5% over the forecast period.

Asia Pacific accounts for the higher market share and is expected to witness rapid growth over the forecast period. North America and Europe are more inclined towards anti-counterfeit applications. Companies’ investments in these regions should focus more on products dealing with counterfeits.

North America and Europe are expected to exhibit an attractiveness index of 0.8 and 0.7 respectively.  Both these regions have robust holographic technologies and are hence matured in comparison to the Asian market. Also, these regions are more inclined towards the use of holographic films in anti-counterfeit applications.

Increasing shelf impact along with brand protection on consumer goods is expected to fuel demand for various end use companies. The high competition in FMCG goods is expected to boost the global holographic films market growth. In terms of value, the pharmaceuticals segment is estimated to be valued at more than US$ 1,200 Mn by 2016 end and is projected to cross US$ 2,700 Mn by 2024 end, exhibiting a CAGR of 10.5 % over the forecast period. In terms of value, pharmaceuticals segment is expected to increase to 2.2X over the forecast period.

Pharmaceuticals segment is estimated to showcase a proper growth within the period of assessment. This segment of the global holographic films market will likely create total incremental opportunity of more than US$ 1,500 Mn between 2016 and 2024. By end use industry, FMCG and pharmaceuticals segments are expected to emerge as the most attractive segments in terms of CAGR and market share during the forecast period. 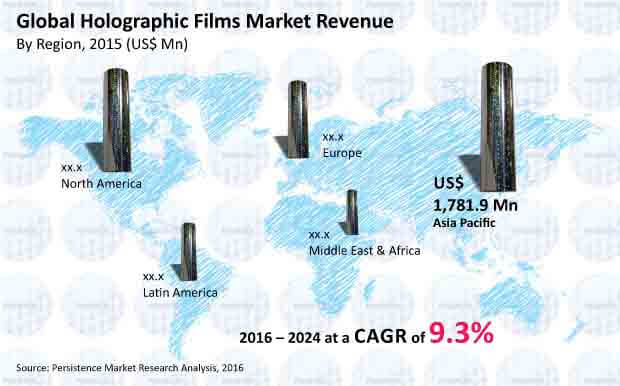 APAC region is expected to emerge as the most attractive segment in terms of CAGR and market share during the forecast period. The holographic films market in APAC is mostly driven by the end use industries such as food & beverage and FMCG. The countries such as China and India are the major contributors in the APAC region both in terms of production and consumption.

The global thermoplastic decorative films market is expected to expand at a healthy CAGR of close to 6% and be valued at US$ 14.7 Bn in 2031..

The global decorative films and foils market is expected to create an absolute $ opportunity worth US$ 10.1 Billion during the forecast period, while registering a CAGR of 5.7%, by value, for the period between 2018 and 2026..

East Asia and South Asia are projected to progress at a fast pace in the global polyester medical films market during the forecast period (2020-2030)..