The presence of activities to entertain all ages at an affordable cost is escalating the popularity of family indoor entertainment systems. Presence of a variety of games such as video games, mahine-based games, arcade games, and VR-based games are boosting the adoption rate of these gaming solutions. Advanced technologies such as virtual reality and 3D display are generating growth prospects for the market players.

The Augmented Reality and Virtual Reality games have become a mainstream trend, improvising the gaming experience of families. Ocassion-based games are highly popular amongst demographics, creating profitable prospects for the competitors in the market. Game centers offering different engaging services such as food & beverages and entertainment are gaining rapid traction in the market. With the presence of a large number of market players, North America is projected to dominate the global market in the coming years.

East Asia is forecasted to generate lucrative growth opportunities on the back of rising living standards of the middle-class population. Service providers in the market are offering loyalty programs such as reward points and membership cards to attract consumers. Prominent players profiled in the global market are Scene 75 Entertainment Centers, Nickelodeon Universe, Time Zone Entertainment, Walt Disney, Dave & Buster's, and Gatti's Pizza.

However, capital expenditure for establishing new setups for entertainment is high, which is a major challenge that is hampering the growth of the family/indoor entertainment centers market.

Manufacturers are working on mixing the AR and VR technology with 3-D projection mapping and interactive digital surfaces to generate new technologically advanced games. The VR gaming zone segment is estimated to create an incremental opportunity of $ 14,569.0 Mn in the family/indoor entertainment centers market between 2018 and 2028.

Moreover, family/indoor entertainment centers offer food & beverages, gaming, entertainment, etc. under one roof, that too for the entire family, which reduces the efforts of customers for arranging the same. People also select the location of the parties that they wish to host based on the size of the family/indoor entertainment centers, as a larger number of guests requires a bigger facility. Hence, the >40,000 sq. ft. segment in is projected to grow at a CAGR of 15% over the forecast period.

With improvements in gaming technology in past four to five years, family/indoor entertainment centers have started offering gaming options for young adults, which include indoor cricket, bowling, finger coaster, football, racing, and other simulation games. This it is another factor fuelling the growth of the family/indoor entertainment centers market. 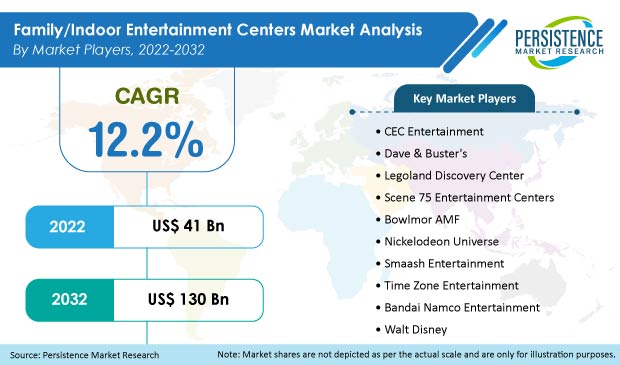 Due to a consistent increase in the middle-class population and increasing disposable income, the family/indoor entertainment centers market in East Asia is estimated to grow at a significant rate over the forecast period, as the increasing GDP of the East Asia region is responsible for the increased spending capacity of individuals in this region. Thus, the market in East Asia is expected to grow at a CAGR of 14.3% during the forecast period.

As per latest 5G-ready telematics control units (TCU) industry analysis by Persistence Market Research, market revenue will total US$ 1.4 Bn in 2021. Registering tremendous growth at 35.6% CAGR from 2021 to 2031, market valuation is expected to surpass US$ 30.1 Bn by 2031..