Global Market Study on Virtual Reality: North America to Lead the Global Market in Terms of Revenue during 2017 - 2022

Virtual Reality (VR) is transforming the way we interact with the objects and environment around us. Increasing use and adoption of virtual reality in various sectors is driving the growth of the global virtual reality market. Virtual presents a 3D computer generated environment which a person can explore and interact with and the person becomes a part of the near-reality world. Virtual reality is gaining popularity across various sectors such as healthcare, entertainment, real-estate, education, etc. VR is being used to provide training to doctors and employees to avoid any mistakes. Digital meetings and conferences in a real-time are becoming possible with VR. Virtual reality is making it more convenient for architects to evaluate designs and see how the structure will look in real.

Apart from sound and vision, companies are working on incorporating more senses in VR, to enhance the experience. VR is also expected to witness growth in e-commerce. E-commerce companies are moving towards adopting VR to enhance shopping experience. VR is also being adopted on a large scale in marketing. Brands are using VR to attract users to buy the product. However, the high cost of VR devices remains the biggest factor hampering the growth of VR. Meanwhile, VR headsets that use wire for connectivity emerge as the obstacle in a natural movement. However, some of the major market players are working on wireless standalone VR headsets. 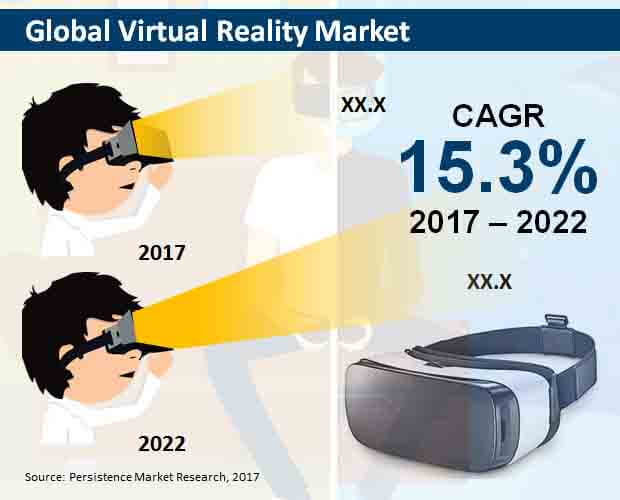 Virtual reality is likely to find the largest application in gaming in the global market for virtual reality during the forecast period. Gaming is projected to reach nearly US$ 1,700 million revenue towards 2022 end. Meanwhile, surgery and treatments are also likely to see the rise in use of virtual reality during 2017-2022. Increasing number of health institutions and hospitals are using VR to train doctors and medical students to easily carry complex procedures and surgeries.

Among various regions in the report, North America is likely to dominate the global market for virtual reality during 2017-2022. North America is projected to witness robust growth, surpassing US$ 2,200 million revenue. Meanwhile, Europe and Asia Pacific Excluding Japan (APEJ) are also likely to remain lucrative in the global market for virtual reality. Growth in IT infrastructure and the rise in penetration of smartphones is leading to the growth of virtual reality in North America. Extensive research and development activities and presence of key market players, especially in the U.S. are also contributing to the growth of VR in North America.

Virtual Reality (VR) has drawn a lot of attention in recent years. Creating an immersive experience where one feels like being transported to another world, new hardware and content are being developed. Companies are making improvements in VR headsets to offer better audio and visual experience in a virtual environment. Various sectors including gaming, healthcare, entertainment, industrial, etc., are moving towards adopting VR to enhance the experience and offer massive benefits. The VR market is witnessing a growth due to the introduction of new features, and technological advancements. Innovative technologies in virtual reality are likely to fuel the growth and offer a major opportunity for the players operating in the virtual reality space.

With increasing adoption of VR, the companies are also focusing on developing content for VR. This content is being created for devices that are more affordable and accessible. Cost reduction of VR headsets is also being considered, hence more investment is being done on the research and development of VR headsets. Majority of individuals are using VR headsets, especially for gaming. Wireless VR headsets, along with the potential of eye tracking and full-body tracking, and better navigation are some of the emerging features in virtual reality market.

The report by Persistence Market Research (PMR) on the global virtual reality market provides qualitative and quantitative analysis of the overall market including the key factors such as trends, drivers, factors hampering growth and opportunities. The report also offers Porter’s five force analysis and market attractiveness analysis. In addition to this, opportunity analysis for the component type, application, and major developments in the industry is also provided in the report.

Major industrial developments include the events that took place in the past decade and the events that are anticipated to occur during the forecast period 2017-2022 and are expected to affect the market. The Strength Weakness Opportunity Threat (SWOT) analysis of the global virtual reality market has also been provided. The report also offers details on the new developments in the market along with the factors hampering the market growth.

On the basis of region, the global virtual reality market is segmented into North America, Latin America, Europe, Japan, Asia Pacific Excluding Japan (APEJ), and the Middle East and Africa (MEA). The report also offers forecast and market size for each region on the basis of component, application, and industries. It also provides CAGR percentage for the forecast period 2017-2022.