Ongoing infrastructure projects such as railways, roads, dams and highways fuel the demand in the crawler/wheeled/compact loaders segment. There are some ongoing projects such as Panama Canal expansion, Gujarat International Finance Tech City in India, Riyadh Metro in Saudi Arabia, South to North Water Transfer Project in China and London Crossrail Project in the UK. These projects are boosting the usage and development in the crawler/wheeled/compact loaders segment.

Rise in urbanization is another reason for fuelling the growth of the crawler/wheeled/compact loaders segment. Urbanization is taking place at a faster pace and will contribute to the growth of the construction industry in developing countries such as China, India, Argentina and Brazil, which is expected to increase the demand for earth moving equipment. Rising population accompanied by growth in demand for residential areas is also likely to support the demand for earth moving equipment such as crawler/wheeled/compact loaders.

Crawler/wheeled/compact loaders are mostly used in mining, construction, farming, forestry and other industries. However, as this equipment is big and bulky, it is unable to be handled properly, leading to injury or sometimes even death. These factors are hampering the growth of the crawler/wheeled/compact loaders segment during the projected period. According to the International Labor Organization, approximately 2.3 million people die every year due to accidents at workstations and other occupational ailments. While, in economic terms, four percent of GDP is lost owing to occupational diseases and accidents. Stringent emission norms related to construction and mining equipment are restraining the demand for earth moving equipment. However, these norms vary from region to region and territory to territory. For instance, a new machinery in North America and Europe has to comply with even more stringent emission regulations as compared to other parts of the world. 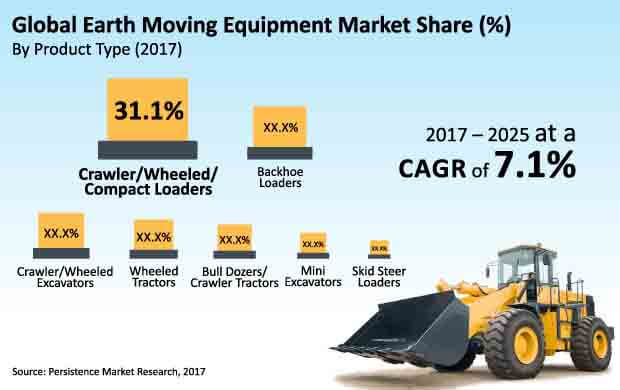 Persistence Market Research presents an analysis of the global earth moving equipment market for the forecast period 2017 to 2025 in a new publication titled “Earth Moving Equipment Market: Global Industry Analysis and Forecast, 2017-2025.” The analysts have observed that market players are adopting a solution oriented approach and are emphasizing on strengthening partnerships with sales and distribution partners for better output. Major players in the market are focused on shifting their production bases to Asia Pacific owing to increasing construction activities in the region. While considering the various segments covered in this report, the expert team of analysts have observed that the crawler/wheeled/compact loaders segment by product type is likely to dominate the market over the assessment period. However, the backhoe loaders segment is expected to grow at an attractive CAGR over the forecast period. While examining the global earth moving equipment market, the analysts have noticed that APAC and North America are expected to hold a relatively high volume and value share respectively. Among all regions APAC is anticipated to witness a relatively high volume CAGR during the period 2017 to 2025, followed by North America and Latin America.

Manufacturers in this market are entering into long-term strategic partnerships with component suppliers and this may provide growth opportunities for the earth moving equipment manufacturers. Studying market trends and consumer demand patterns to continuously evolve in product offerings and ensure uninterrupted revenue generation is the primary approach taken by manufacturers in the global earth moving equipment market.

Extensive primary research is the main focus of this report

Yearly change in inflation rate has not been considered while forecasting the market numbers. Average Selling Price (ASP) has been considered to determine market values. Macroeconomic indicators such as GDP and end-use application industries’ growth have been considered. Top-down approach has been used to obtain market numbers and bottom-up approach has been used to counter-validate the market estimations. The report provides detailed information about the pricing analysis, the global earth moving equipment market value chain and a comprehensive market forecast. The global earth moving equipment market supply chain analysis is another important aspect covered in this report.

The average price of each earth moving equipment is inferred across all the five assessed regions. Market volume is inferred through in-depth secondary research and validated from industry experts through primary interviews. Each interview is thoroughly analyzed and average market volume is deduced and reconfirmed prior to incorporating in the report. The market value of the global earth moving equipment market is thus calculated from the data deduced from the average selling price and market volume. For the 8-year forecast of the global earth moving equipment market, various macroeconomic factors and changing trends have been observed, giving an idea about the future of the market. Other important factors considered to arrive at market forecast are the size of the current market, inputs from the supply side and demand side and other dynamics shaping the scenario of the market. In the compilation of the report, the forecasts are conducted in terms of CAGR, while other important criteria such as year-on-year growth and absolute dollar opportunity have also been incorporated presenting the reader with crystal clear insights and future opportunities likely to emerge in the global earth moving equipment market.