Consumers are increasingly seeking the combination of taste and nutrition in every food product, as the preference for healthy eating is rising, without compromising on the taste of food. This has further increased the demand for healthy food ingredients, including spices, which are the major ingredients that impart taste and flavor to food products.  Spices play a vital role in developing the taste and flavor in food products, and also contain numerous health beneficial properties. Due to this, the demand for healthy and flavorful spices such as cinnamon is growing. Cinnamon is known for its sweet taste that increases the flavor and taste profile of food products. Additionally, cinnamon also possesses health beneficial properties, such as antioxidants that fight against free radicals and prevent damage to cells. Moreover, cinnamon also helps manage blood sugar and cholesterol levels. All these factors are playing a major role in the growth of the global cinnamon market.

Increasing Use of Blended Spices Favoring Growth of Cinnamon Market

Blended spices are emerging as a new advantageous combination providing diverse flavor and taste to food products. Currently, food manufacturers are creating innovative blends by adding different spices. These blended spices are further utilized for seasoning and other purposes. Spices such as cinnamon, turmeric, black pepper, ginger, and chili are mostly used for blending due to their flavor profile. As consumers across the world are craving vibrant spices and taste profiles, spice manufacturers are formulating innovative solutions by offering blended spices. Furthermore, blended spices are also associated with numerous health benefits such as antioxidants and anti-inflammatory effects.

The ‘go organic’ trend has influenced consumers to add more organic foods into their diets. This trend also impacts cinnamon growers. Additionally, food manufacturers are increasingly targeting health-conscious consumers, and are demanding organic cinnamon from their suppliers. This has further increased the cultivation and utilization of organic cinnamon. Organic cinnamon is grown under different circumstances, without the use of any pesticides. 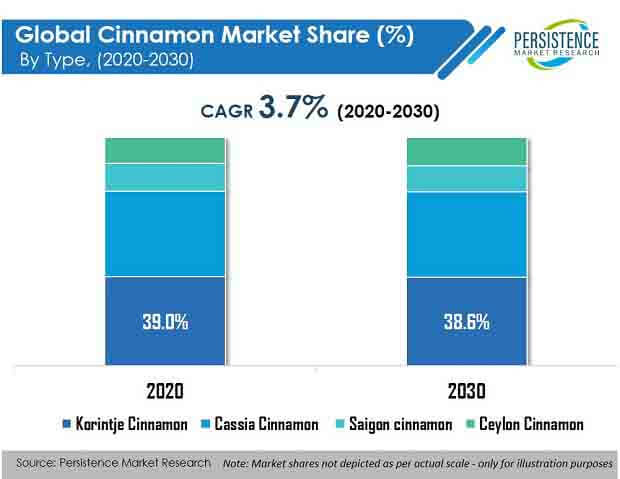 North America and Latin America is projected to exhibit high growth in the global cinnamon market during the forecast period of 2020-2030. Growth witnessed in these regions is attributable to the rising consumption of cinnamon-based food products, such as cinnamon rolls, cinnamon whiskey, and others. Furthermore, Ceylon cinnamon is one of the most imported spices in Latin American countries such as Mexico, which is further creating a favorable market scenario for cinnamon in the region.

South Asia and East Asia are still dominating the global cinnamon market with the highest market value share, owing to the higher production and consumption rate of cinnamon in these regions. Countries such as Indonesia, Sri Lanka, and India have been consuming cinnamon from a long time. Cinnamon used in cooking and making tea is a major contributing factor for its higher consumption in South Asia. China is also one of the major producers of cinnamon, and also consumes a substantial amount of the spice.

The unfortunate spread of COVID-19 disease is affecting the global economy, and every industry is currently facing unwanted consequences due to this global pandemic. The food and beverage industry is also strongly fighting against this frightful situation, and balancing supply and demand for substantial growth of the industry. However, some markets in the industry are still witnessing promising growth rates, such as the cinnamon market. Cinnamon, as a spice, is widely used across the world, and demand shouldn’t be affected much due to the Covid-19 pandemic. However, the market could face supply disruptions during the early part of the forecast period, as it is majorly produced and imported from South East Asia. As such, the COVID-19 pandemic would have a moderate effect on the global cinnamon market.

As the virus spreads and cases mount, and lockdowns increase, there are seemingly countless ways that the food industry will be tested and strained in the coming months and quarters. The seasonality of crop production and shelf-life of products will impact the supply cycle. Market demand will be fulfilled when supply chain services resume, which will facilitate sales from key production clusters to consumption clusters

Cinnamon Market: Scope of the Report

The primary objective of the global cinnamon market report is to provide insights regarding the opportunities in the market that are supporting the transformation of global businesses associated with cinnamon. It is very important to consider that, in an ever-wavering economy, we provide estimated (Y-o-Y) year-on-year growth rate in addition to the compound annual growth rate (CAGR) for overall forecasts, to enable readers to better understand the analysis and evaluation of the global cinnamon market, and to discover lucrative opportunities in the market.

A demand-side approach is followed to estimate the sales of target products, followed by an in-depth supply-side assessment of value generated, key trends, and events over a predefined period. This methodology is based on standard market structures, methods, and definitions that are based on inputs from local sources in over seven regions - North America, Latin America, Europe, South Asia, East Asia, Oceania, and the Middle East & Africa, which PMR considers for segmenting the global market. Statistics, characteristics, and variances are collected at a regional level, aggregated at the same level, and then synthesized at a worldwide level to create global market measurements. Our main sources of research include: