As per the research conducted by Persistence Market Research, global ammonia consumption is expected to reach a value of US$ 193.7 Bn by the end of 2032. The South Asia and Pacific market is anticipated to remain a key regional market in the ammonia business owing to high consumption in India and ASEAN countries, and the market is forecast to expand at a CAGR of 5.5% over the decade.

Worldwide sales of ammonia account for around 40% to 45% of the global industrial gas market.

Over the past few years, the global market for ammonia witnessed year-over-year growth of around 3.7% to 4.2%.

High demand for fertilizer production and manufacturing of industrial explosives have resulted in considerable consumption of ammonia. The market has been predominantly influenced by certain macro-economic factors such as growing population, growth in the agricultural sector, and expanding mining industry, among others.

Higher demand for the production of fertilizers over the coming years will reflect a growth rate of around 4.7% CAGR between 2022 and 2032, on a value basis.

The market was significantly impacted by the emergence of COVID-19 in 2020. This impacted the demand for ammonia in the chemical industry and fertilizer production in certain regions. 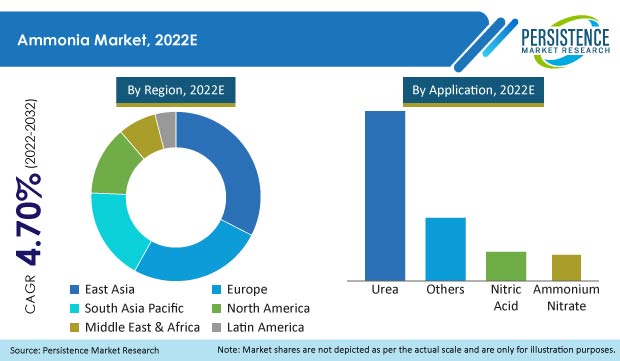 Why is Demand for Ammonia Going Northward?

The agricultural sector is witnessing significant growth across the world due to the growing demand for producing crops of better quality and quantity and with a higher yield.

The agriculture sector contributes a fair share to a country’s GDP, especially in developing countries. Growing agriculture leads to a higher requirement for various agrochemicals such as fertilizers (urea, MAP, DAP, etc.), which indirectly leads to the growing need for ammonia.

Demand for fertilizers is increasing steadily and has increased the consumption of ammonia, which, in turn, will raise the value of the ammonia market over the forecast period. Further, subsidies provided by governments for fertilizers will also benefit farmers and increase the demand for ammonia across regions.

Green ammonia can be manufactured using air and water by means of clean renewable energy. However, green ammonia should not be confused with brown ammonia, which is manufactured from coal and other fossil sources.

Green ammonia offers various benefits and will thus create great opportunities for ammonia manufacturers. This is expected to influence the demand for green ammonia over brown ammonia as the years go by

What is Hindering Market Growth of Ammonia?

“Demand-Supply Gap & Over Usage of Fertilizers”

Demand for ammonia for various applications is more than its in-house production in certain regions. As a result, these regions are highly dependent on imports. To fulfill its demand, North America has to import ammonia, and consequently, the region has to face various problems such as price fluctuations and a deficit in sources, which restrains the ammonia market to some extent.

Furthermore, the regular use of chemical fertilizers and pesticides has resulted in a substantial decrease in the quality of soil across the world. As a result, to meet the increasing demand for sustainable methods of agriculture by decreasing hazards generation and carbon emission, the demand for organic fertilizers is increasing.

Why is China an Important Market for Ammonia?

China is estimated to manufacture around 48 million tons of ammonia each year, whereas, the demand for ammonia in the country is around 43 million tons.

Will India Drive the Stance of Local Ammonia Manufacturers?

Thus, higher subsidy on N-fertilizers is driving the demand for ammonia, as ammonia is a major component of nitrogen fertilizers such as urea, MAP (Mono-Ammonium Phosphate), and DAP (Di-ammonium Phosphate). With such subsidies, farmers buy higher amounts of fertilizer, thereby increasing the consumption of ammonia.

As the growing population needs a higher quantity of crop production, demand for ammonia in India will remain significant over the coming years.

The anhydrous ammonia segment’s share is expected to be on the higher side due to high demand for the product, owing to its abundant availability and availability in the gaseous form.

Further, key suppliers of ammonia are expected to provide strength to their value chain through downstream production and by maintaining long-term contracts with end users.

Which Application of Ammonia is Set to Bring in Higher Revenue Streams?

The urea segment is considered to be a prominent segment with high market attractiveness. The segment is expected to create an incremental dollar opportunity of US$ 36.23 Bn during the forecast period of 2022 and 2032.

This can be attributed to the higher use of fertilizers in many regions to enhance the quality and quantity of crop yield. As the agricultural sector is growing across the world due to the increasing population and rising urbanization, demand for agrochemicals, especially fertilizers, is also increasing, which, in turn, is increasing the demand for ammonia.

Prominent market participants are focusing on the expansion of their production capacities to cater to growing demand from end users. To enhance their market dominancy, they are acquiring other ammonia manufacturers to increase their consumer base.

Several manufacturers are opting for the production of green ammonia and are shifting their technology for this purpose instead of manufacturing brown ammonia.

Some of the key market developments are:

Similarly, other key developments related to companies manufacturing ammonia have been tracked by the team at Persistence Market Research, which are available in the full report.

Ammonia Market by End Use:

How much is the global ammonia market worth?

What is the main factor driving demand for ammonia?

Substantial production of fertilizers, including urea, MAP, DAP, and others, and increasing production of industrial explosives are expected to drive market growth.

What is the expected consumption outlook of ammonia through 2032?

Worldwide consumption of ammonia is projected to increase at 4.7% CAGR through 2032.

What are the key trends being witnessed in the global marketplace?

Acquisitions & mergers, expansion, collaborations, and investments in R&D for the production of green ammonia are being witnessed in this industry.

Which 5 countries drive most of the demand for ammonia?

China, the U.S., Russia, India, and South Korea account for the highest demand for ammonia.

Which countries are key producers and exporters of ammonia?

China, the U.S., Saudi Arabia, India, and Indonesia are key producers and exporters of ammonia.

What is the production volume of ammonia in China?

The production volume of ammonia in China was estimated at around 48 million tons in 2021.

Urea sales to witness a value CAGR of 2.3% over the assessment period of 2021 and 2031. In terms of volume, demand is expected to increase at around 2.2% CAGR over the same period..

The global Agrochemicals market is estimated to reach US$ 281.7 Bn at the end of forecast period, while growing at a CAGR of 4.9%, by value..