Ammonia, a compound of nitrogen and hydrogen, is a colourless gas with a characteristically pungent smell. It is used in manufacture of major chemicals. Ammonia is a major source of nitrogen nutrient and is mainly used as fertilizer as well as for manufacture of other fertilizers such as urea, ammonium sulphate, and ammonium phosphates.

Ammonia is either directly (as hydroxide) or indirectly used in commercial cleaning. It is also used as a critical feedstock for the manufacture of nitric acid, an important precursor for products such as calcium nitrate, ammonium nitrate, nitrobenzene, toluene, adipic acid, and other speciality organic compounds.

Demand for nitrogen-rich fertilizers such as DAP, MAP, and urea is also fueling demand for ammonia. Also, increasing environmental emissions concern regarding hydrofluorocarbon is driving volume sales of ammonia for commercial refrigeration application. However, fluctuating natural gas prices and increasing fertilizer imports are expected to hamper growth of the Australia ammonia market to a certain extent.

Trends in the Australia ammonia market include expansion of ammonium nitrates production capacities by various manufacturers and increasing adoption of ammonia-based refrigeration systems.

On the basis of product type, the Australia ammonia market has been segmented into anhydrous ammonia and aqua ammonia. Anhydrous ammonia segment accounted for 96.8% value share in the Australia ammonia market in 2015 and is expected to retain its dominance throughout the forecast period. It is also anticipated to be the fastest growing segment during the forecast period, exhibiting a value CAGR of 6.4% over the same period. 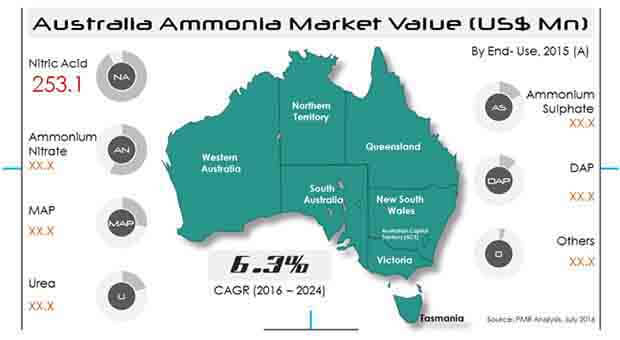 On the basis of application, the Australia ammonia market is segmented into ammonium nitrate, nitric acid, ammonium sulphate, urea, DAP, MAP, and others. Nitric acid segment is expected to expand at the highest CAGR over the forecast period, followed by ammonium nitrate.

Nitric acid segment is anticipated to account for major market share in terms of value and retain its dominance throughout the forecast period. This is mainly attributed to increasing consumption of nitric acid for the manufacture of other downstream products.

The market in New South Wales accounted for the second-highest share of 28.4% in 2015 and is anticipated to expand at the highest CAGR in terms of both value and volume over the forecast period.

Global Phosphate Rocks Market is estimated to reflect a market valuation & revenue of around US$ 27 Bn with a healthy CAGR of 3.1% by 2022 end. More details here.