Growing mineral extraction activities are fueling the global demand for xanthates in mining purposes. Moreover, rising inclination of foreign investors in the mining industry is, in turn, boosting the growth of xanthates market. Various governments are strongly supporting the mining sector by permitting foreign investments in mining projects. Total investment in the mining sector in Mexico reached US$ 14.6 Bn collectively in 2012 and 2013. Mining companies and governments in developing countries of Latin America, such as Chile, Brazil, Mexico, and Peru, are aiming to tap on a majority of mineral resources through mining to drive economic growth of the respective countries.

In January 2015, the government of Peru invested approximately US$ 6.2 Bn on mining projects to increase the extraction capacity of minerals, including zinc, copper, and gold. Furthermore, mining firms are focusing more on extracting minerals from underground mines rather than open-pit mines to reach mineral-rich resources deep inside the earth. Minerals extracted from deep down require reagents for more processing, which will fuel the growth of the xanthates market. 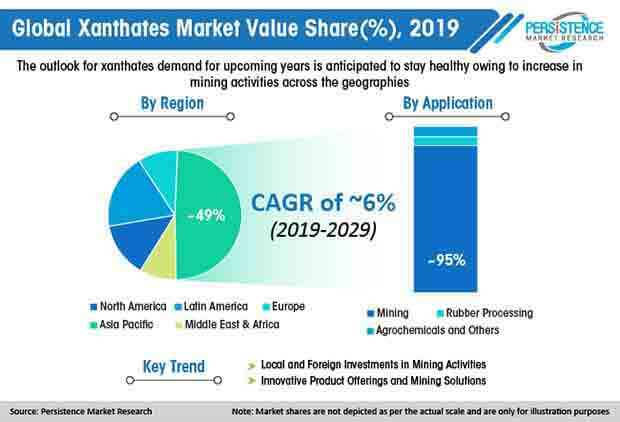 Global mining industry is cyclic in nature, characterized by bust and boom phases that occur on an average every seven to nine years. Growth of the global mining industry is strongly correlated to the overall global economic growth. Relatively slow economic growth observed in North America, specifically in the U.S. – a major consumer of commodities and minerals, has in turn resulted in subdued growth in the global mining industry over the recent past. Moreover, commodity prices have witnessed a significant downward trend, primarily due to relatively low demand in key mineral-consuming regions across the globe.

However, the mining industry in North America is projected to grow considerably during the forecast period and mining companies have shifted focus toward extraction of ores through deep underground reserves. Thus, for processing ores and minerals from deeper deposits, there has been increasing requirement for xanthates for the flotation process. This factor is expected to fuel the growth of xanthates market.

The mining sector accounts for a major share in the overall xanthates market. The aforementioned factors are expected to have positive impact on the growth of xanthates market. As such, the North America xanthates market is slated to witness substantial growth, especially during the second half of the forecast period.

Availability of Cheaper and Safer Alternatives

There are certain limitations with the use of xanthates in the mining industry. These limitations are pertaining to the safety, health, and environmental issues related to the usage of xanthates. Xanthates being combustible, self-ignite/explode and release toxic gases such as carbon disulfide during usage, storage, and shipment. This factor is expected to have an impact on the growth of xanthates market. As a result, manufacturers are focusing on the use of sustainable methods for mining.

For instance, Cytec XR series, which are flotation reagents, are used as replacements for xanthates, which combat the stability and other environmental issues related to xanthates.

Though there are alternatives available for xanthates, in the current scenario they hold a smaller percentage, i.e., <5%, as compared to xanthates. The major reason being the popularity of xanthate usage and the lower cost and easier availability.

Over the recent past, demand for xanthates has registered steady growth. Moreover, this trend is expected to continue during the forecast period. In order to cater to the growing demand for xanthates from end-use industries, such as agrochemicals, rubber processing, and mining applications from regions across the globe, manufacturers are focusing on strategically expanding their capacities.

In 2016, Senmin International (Pty) Ltd. invested US$ 6.1 Mn for capacity expansion of xanthates by 4000 tons/year. Moreover, over the recent past, efforts have also been directed toward providing a stable supply and access to basic raw materials such as amyl alcohol and others. Moreover, existing supply of raw materials and volatility in prices of raw materials are some of the factors that are expected to prompt key xanthate manufacturers to strengthen access to such key raw materials.

Xanthates Market - Scope of the Report

Persistence Market Research (PMR) recently published a study report on the global xanthates market. The report provides detailed valuation on the key market dynamics such as drivers, trends, opportunities, and restraints, along with detailed information about the xanthates market structure. This market research report presents exclusive facts and figures about how the xanthates market will grow over the forecast period.

Key indicators of market growth, such as value chain analysis and supply chain, compounded annual growth rate (CAGR), and year-on-year (Y-o-Y) growth of the market are explained in PMR’s study in a comprehensive manner. This information can help readers understand the quantitative development projections of the xanthates market over the forecast period.

Key Segments of the Xanthates Market

PMR’s study on the xanthates market is divided into three significant segments- product type, application, and region. This report offers comprehensive data and information about the important market dynamics and growth parameters related to these categories.