Shrimp has long remained a highly- celebrated commodity in the arena of international trade. According to recent studies, the global farmed shrimp production roughly reached 4 million tons in 2018, which represents an increase by 3-5% over the production recorded in 2017. Although the overall growth in demand for seafood has been instrumental in the build-up of the shrimp farming landscape, the continued instances of viral infections to farmed seafood remains a longstanding concern. The increasing prevalence of viral infections in shrimp farming has called for effective diagnosis and timely treatment, propelling high demand for shrimp disease diagnostics. 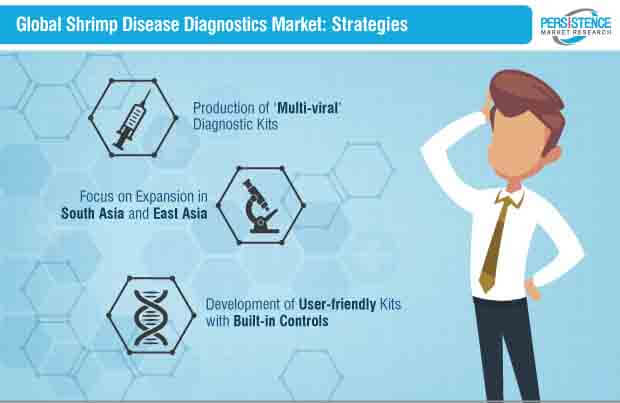 As disease diagnosis and subsequent treatment continue being the key cornerstones in aquaculture, seafood farmers are more than keen on integrating state-of-the-art improvements into their health management paradigms. Discerning the exceptional opportunities in the shrimp disease diagnosis market, Persistence Market Research (PMR) offers an in-depth assessment of how demand for shrimp disease diagnostics will evolve in 2019 and beyond.

Disease management has always been a bright spot in aquaculture, as intensively cultured seafood products remain naturally susceptible to viral infections. As ‘disease-free’ certifications started making their way to the prominent requisites for successful transactions in the shrimp landscape, adoption of effective diagnostics became highly imperative for shrimp suppliers to ensure product integrity.

Shrimp processors and exporters worldwide bore the brunt of strict technical barriers concerning disease-free certification requirements that were put in place by importing countries- the Republic of Korea, Australia, China, Saudi Arabia, Mexico, and Brazil. Such instances led to a substantial increase in the overall adoption rate of effective disease diagnosis and treatment in the shrimp farming space. As commercialization of shrimp continues on an uphill trajectory, the market was valued at ~ US$ 361.4 Mn in 2018 and is expected to reflect growth at a CAGR of ~ 6.5% during the assessment period.

One of the most commonly employed techniques for disease diagnosis and prevention in shrimp farming has been polymerase chain reaction, commonly known as the PCR technique. In parallel with the increasing demand for quantitative research as well as high throughput screening formats in aquaculture, real-time PCR based systems are grabbing end-user attention in the shrimp disease diagnostics market space. Manufacturers, accordingly, are focusing on development of PCR based systems with advanced designs, which in turn would facilitate accurate, sensitive, and flexible real-time diagnosis.

As ordering of shrimp disease diagnostic kits via online or e-procurement channels has been a pervasive and persistent trend, manufacturers in the shrimp disease diagnostics market are vying to solidify their online presence. Apart from purchasing, service requests received online also require assistance from the sales and product forces, thereby encouraging the market players to strengthen their online presence. 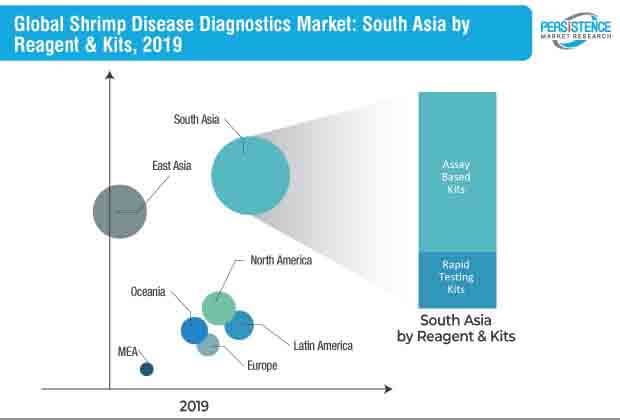 Key players in the shrimp disease diagnostics market remain highly focused on investments in product development for new commercial variants, which would help them in reaping significant profits. Major players operating in shrimp disease diagnostics market are zooming in their focus into development of ‘multi-viral’ detection kits, as consumers’ quest for detection kits with impeccable efficacy picks pace. Brands are also investing in consumer-centric designs with easy-to-use interfaces and offering detailed instruction manuals with instructions for the users to comprehend use of these kits in a better way.

Strategic mergers and acquisitions remain two cardinal points of manufacturers’ expansion strategies. Companies are entering into partnerships with prominent universities and government agencies, R&D centers, and testing centers & ISO-accredited laboratories to develop and commercialize novel shrimp diseases diagnostics through pioneering technologies. For instance, in 2018, Nutreco made an official announcement of its investment in the Israeli startup, ViAqua, as a vital part of its overall focus on combatting diseases in aquaculture. ViAqua has been investing in development of the first ‘orally-administered’ treatment for farmed shrimp, which would help improve its resistance to viral diseases, including WSSV (White Spot Syndrome Virus (WSSV).

The competitive landscape of shrimp disease diagnostics market reflects a fair degree of consolidation, as the top two market leaders- Thermo Fisher Scientific and FUJIKURA KASEI CO., LTD- command more than two-third of the revenue share. The remaining companies hold around 34% of the global market share, and still have a long way to go in terms of competing with the two industry goliaths.

Though it is a global market space, the market activities remain highly focused in South Asian and East Asian countries, given that the prevalence of shrimp diseases in these countries saw a two-fold increase as compared to other regional bases. According to sources, in the past 10 years, losses owing to widespread diseases in shrimp farms of South Asia have surpassed a billion US dollars in export income. As price dictates consumer decisions across the Asian countries, manufacturers are extensively focusing on offering cost-effective kits with instant results. 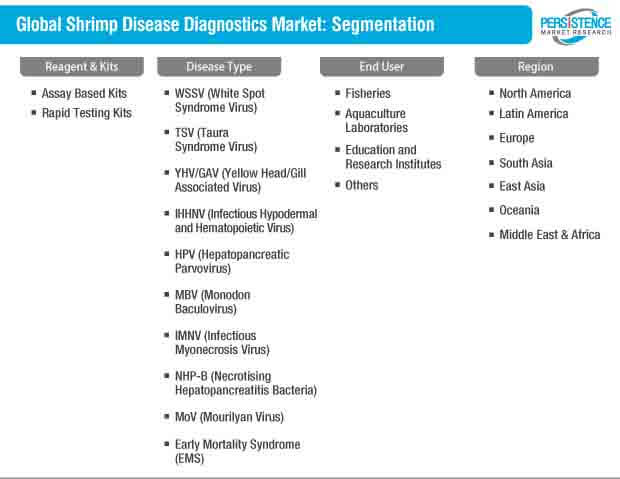 Persistent efforts to introduce newer and effective diagnostic tools to combat diseases in aquaculture will continue complementing growth of shrimp disease diagnostics market. The authors of this report are of the opinion that the market players will reap ample benefits by shifting their focus toward South Asia and East Asia, as the disease prevalence rates in these regions and the western half of the globe vary by a significant margin. Manufacturers are focusing on breaking through the inertia and designing effective shrimp disease diagnostic products, which would further help them reap considerable profits.

The biosecurity of aquaculture is composed of a wide range of concepts, which include integrated as well as strategic approaches such as the different policies and regulatory frameworks to analyse and manage risks in the sectors of aquaculture & food safety. It also consists of the life and health of animals & plants, which include the associated environmental risk. It is anticipated that due to several benefits, the concept of biosecurity application to shrimp aquaculture will witness significant growth to reduce losses in shrimp production due to the high prevalence of diseases.

Hence, the use of sound epidemiological principles and a logical & structured approach is expected to help achieve biosecurity, which is expected to be a major factor driving the shrimp disease diagnostics market.

As per an international trade survey, shrimp is one the frontline commodities that account for more than 15% of the revenue share in internationally traded seafood products, and has reached $140.0 Bn in 2017.

Aquaculture alone contributes to over 50% of the global shrimp production. Shrimp has been an important commodity in international trade and during 2009. Its global production by capture was 3.17 Mn tonnes and by aquaculture it was estimated to be 3.5 Mn tonnes. China has been the largest producer of aqua cultured shrimp, (1.33 million tons) followed by Ecuador, Mexico, India, Bangladesh, and Southeast Asian countries.

Though there has been huge negative impact of diseases on the global shrimp farming industry, the shrimp disease diagnostics market has continued to grow and has matured into a more sustainable market to meet the high demand for disease diagnosis for the growing shrimp trade.

Despite the emergence of the White Spot Disease (WSD) over two decades ago, there is only one nontherapeutic options available for the treatment of the same, which is the detection and prevention of the entry of this pathogen into hatcheries and farms by means of smart diagnostic tools. A wide range of disease diagnostic tools have been developed for aquaculture use, which have been derived from human as well as veterinary medicine. They primarily include first-generation tools.

In the recent times, the emergence of third-generation DNA-based diagnostic tools, such as Polymerase Chain Reaction (PCR) and DNA hybridization, have revolutionized the shrimp disease diagnostics market. These were primarily diagnostic revolutions where PCR-based White Spot Syndrome Virus (WSSV) detection labs were set up across regions that account for a high rate of disease outbreak.

The screening of viral shrimp pathogens through the PCR laboratories requested by farmers have topped the list of biosecurity in shrimp farms, which prevents the spread of highly infectious diseases such as WSD though the early molecular detection and adoption of the Best Management Practices (BMPs)

Over the years, there has been an increasing trend in the intensification and commercialization of aquaculture, which has exacerbated the epidemics, and this has become one of the major drivers of the shrimp disease diagnostics market.

Severe disease-related mortality and thereby economic loss due to different viral agents, such as Monodon Baculovirus (MBV) in Taiwan, Infectious Hypodermal and Hematopoietic Necrosis Virus (IHHNV), and Taura Syndrome Virus (TSV) in the Americas, and Yellow Head Virus (YHV) in Thailand, have been reported. In addition, a major disease outbreak by White Spot Syndrome Virus (WSSV) has also been reported from across the globe. This has resulted in the higher demand for shrimp disease diagnostics tools.

The key manufacturers operating in the shrimp disease diagnostics market are keen on implementing new and differentiating strategies to meet not only product demand, but also dominate the regional market. These companies are focused on leveraging their global reach, creating new research centers, leveraging their existing client base for growth prospects & development for the introduction of new products for shrimp disease diagnostics, continuous product lunches, joint ventures, partnerships, and mergers & acquisitions.

Some of the additional questions addressed in this report on the shrimp disease diagnostics market are as follows:

The report starts off with an executive summary, wherein demand side trends, supply side trends, technology roadmap, and expert analysis & recommendations have been discussed in detail. The second chapter talks about market overview and key market trends, further developing a deep understanding of the market growth through 2029. Last but not the least, the competitive landscape of shrimp disease diagnostics market offers a clear view of the key companies operating in the market landscape, along with their key focal points, differential strategies, regional presence, and other strengths.

The research methodology in the shrimp disease diagnostics market is a multi-pronged approach, including both primary and secondary phases. While primary phase is the one that involves in-depth interactions and discussions with industry experts, the secondary phase involves extensive research of credible resources.