In light of the profound transition expected in the maritime industry, emergence of fishing and shipping activities are likely to reshape and diversify associated businesses. Increasing marine activities are fueling the demand for highly efficient boats, motors, engines, and other essential marine equipment that help match the pace with the rapid marine industry expansion. The blend of technology in marine systems has further enhanced the capabilities boats and other marine vessels. Outboard engines market builders are incorporating innovative technologies such as contra-rotating props, electric steering, and performance customization, which are finely tuned by robust, repetitive computer simulations.

Persistence Market Research (PMR) conducted a detailed assessment of the outboard engines market entailing a global market perspective on the popularity of outboard engines owing to the high horsepower, small size, and their efficacy in achieving top-speed. Additionally, the report also discusses the factors that support demand growth including the popularity of specialized boats needed for fishing tournaments that require multiple motors. 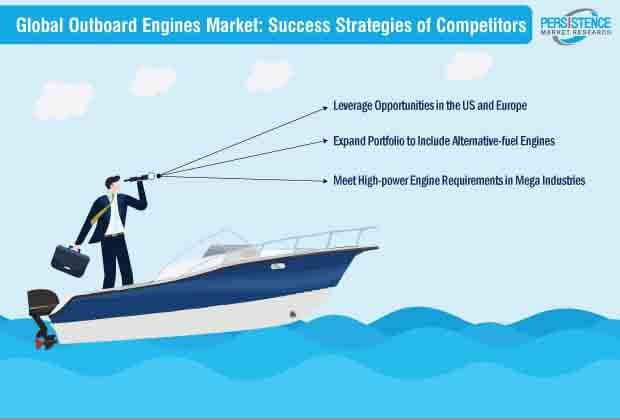 From the introduction of outboard engines with 10 HP to the ones with over 100 HP, the outboard engines industry has marked the significant evolution of the product. Another aspect that showcased a rapid transformation throughout the period of evolution was the growth of electric power. Green machines began to gain momentum in the early ’90s, though they were slow and heavy. While their heavy four-stroke valve train was environmentally cleaner, boats failed to carry it with poise on their transom, kicking in evolution. Recognizing their benefits, boat owners began to build boats with deeper and wider transoms to carry them. By the time four-stroke upended two-stroke engines, motor-makers had trimmed their weight back to the slim numbers that were previously achievable only by two-stroke variants, resulting most boats today to have improved sea-keeping abilities.

The global volume sales of outboard engines stood at around ~745 thousand units in 2014, and reached ~803 thousand units in 2018. Modern outboards, both two- and four-stroke, have evolved considerably in the last decade, as a result of both advances in technology and stringent emission standards. Newer models that use lesser fuel, are substantially more reliable, are relatively quieter, and those that are more environment-friendly than older generations continue to enter the market. In 2019, the outboard engines market is anticipated to be valued at ~ US$ 4 Bn. The shift towards outboard engines is linked to the kind of boats preferred by buyers. Outboard-powered deck boats are accountable for the demand growth for outboard engines.

Electric-drive boats have been presaged as the future of marine boats. A large number of boat owners favor electric propulsion to power fishing boats, recreational boats, cruisers, and pontoons, and tender boats. The growing preference for electric propulsion outboard is attributed to the ease of operations, absence of gas fumes, engine noise, and vibrations. With significantly lesser moving parts, there is minimal wear out or break down, making electric outboard engines a viable alternative for small boats.

The growing utilization of high-performance and high-speed boats in contemporary boating and fishing activities is becoming mainstream. There is a marked emergence of multi-engine pontoons from several different manufacturers. During the last decade, a number of anglers have moved into faster, larger, more agile outboard-powered center console fishing vessels, further driving the need for advanced outboard engines powering these revolutionary large boats. 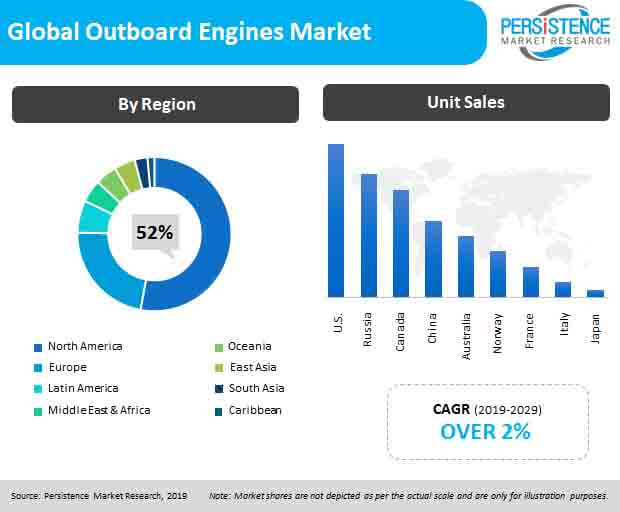 Leverage Opportunities in the US and Europe

Expand Portfolio to Include Alternative-fuel Engines

The need for speed has been at the core of professional boat operations ever since the introduction of powerboats. However, the outboard engine manufacturers need to recognize that the achieving high-performance needs to be balanced with the stringent fuel efficiency mandates and environmental compliance. As outboard engines designed for commercial operations have to stay in compliance with emission guidelines stated by regulatory bodies, it could impact the overall growth of the market negatively. Having said that, outboard engine providers can offset the challenge by expanding portfolio to include alternative-fuel engines. An LPG outboard engine is one such innovation that quieter, quicker to start, and has minimal maintenance for fuel-related accessories. With relatively lesser CO2 emissions, the LPG gas is emerging as the choice of fuel for next-gen outboard engines.

High power outboard engines are becoming a popular choice among end users as the boat makers are increasing the lengths of modern boats. As growing marine and boating activities generate the need for cutting-edge boats and vessels, high power engines to support their capability continues to gain traction. Companies contributing to the outboard engines market are emphasizing to meet the high-power engine requirements with future innovations centering this demand. Next revolution for center consoles could be a lightweight diesel outboard engine offering significant power.

The outboard engines market is witnesses a high consolidation of leading players that for more than 80% of the total market share, where Yamaha Motor Co., Ltd.—one of the key players holds ~40% of the total market share. The most significant tactic that supports this market share is their continued emphasis on product diversification and portfolio expansion to support the market transformations which include the use of multiple engines, the production of larger boats, and the quest for environment-friendly fuels. Companies dominating the outboard engines market are involved more in overseas sales in Europe, North America, followed by Asia Pacific.

Brunswick Corporation recently completed the acquisition of Freedom Boat Club (FBC). The addition of FBC would allow Brunswick to leverage capabilities and resources to create additional value and growth and help the company provide exceptional on-water experience for members. 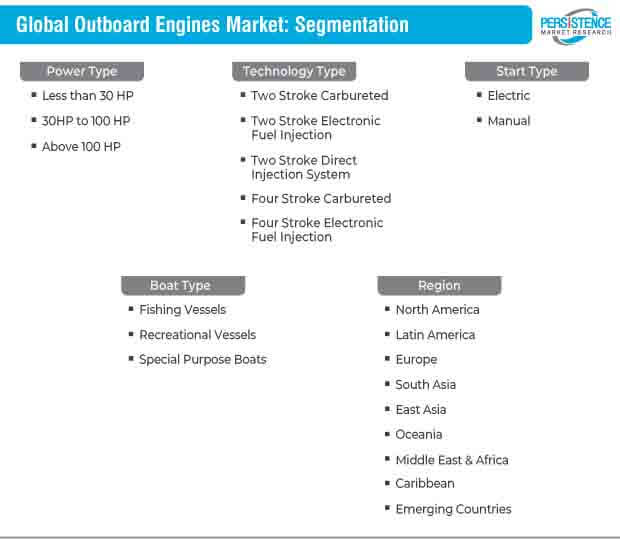 Analyst Viewpoint of the Market

The PMR analysts have a positive outlook of the outboard engines market. As North America and Europe hold lucrative opportunities, analyst recommend vital business expansions in these geographies. With both new and pre-owned boat sales rising across the country, it is a good time for boat dealers to be target American consumers. Moreover, widespread adoption of large outboards is majorly witnessed in the North America, in wake of the growth in maritime tourism and fishing and recreational activities. New distribution centers and sales offices are being established in an attempt to expand their geographic presence and gain more number of customers. Companies are entering the European market on account of the growing interest of European boat builders in outboards. This could create future business expansion opportunities for outboard engine providers.

New entrants have to face significant challenges in order to have a customer base to compete in the market dominance of global leading players. Although the cost of above 100 HP outboard engines is relatively higher, the demand for high power variants continues to grow. Providing low-cost products without compromising on efficiency and quality of engines may help the market participants in gaining significant customer attraction. Demand for outboard engines over inboard engines is attributed to the emphasis on reducing the weight of center console of vessels, which will offer promising avenues for providers. In order to gain customer traction, the market participants may focus on new product launches and development activities.

Several countries in these regions have tourism dependent economies. As the tourism industry directly and indirectly impacts the economy of the nation, these economies have projected relatively significant growth in the recent past. The Caribbean region is located in the center of the Americas, this provides an easy access to North America, Central America, and South America markets. For decades, the Caribbean region attracted tourists from around the world, leveraging its warm and sunny weather. The top three countries for long-stay tourism are Jamaica, the Bahamas, and Barbados.

Above 100 HP type of engine powers are growing traction towards high powered outboard engines, which is expected to be an ongoing trend gaining momentum in the global outboard engines market. Large power outboard engines continue to lead the segment in terms of year-on-year growth in unit sales as well as in market size. This, in turn, is responsible for the upward shift in the industry’s average horsepower consumption. The reason behind this, is the increasing demand for large boats that requires large engines.

In the global outboard engines market, North America and Europe markets are projected to hold a significant share in the global market owing to the relatively high demand for recreational and fishing boats. In terms of the growth prospective, India, South Africa, China, Caribbean, and the ASEAN region are picking up the outboard engines market due to the robust outlook of the marine tourism and fishing industry.

Key Questions Answered in the Report on Outboard Engines Market

The next section in the PMR study on the outboard engines market offers an evaluation of the regional landscape of the market. The regional evaluation allows industry players to make key strategic decisions in terms of geographical expansion and investments. The segment-wise and country-level evaluation of individual regions helps the readers of the outboard engines study to potential opportunities in key regions pertaining to the market. Backed with year-on-year growth projections, global value and volume share, this section is a significant part of the report on outboard engines market.