With extensive rise in the global geriatric population, the deployment of various devices and equipment addressing the several issues of the aging population is also increasing. Moreover, the growing per capita income of the consumers in developed as well as developing regions has triggered the use of several advanced devices for the treatment of a wide range of diseases. Manufacturers of nebulizer devices are expected to witness a shift in the pricing as the production shifts to emerging economies. The shifting production of nebulizer devices can be attributed to the easy and cheap availability of land in developing regions. For instance, Koninklijke Philips N.V., Becton, and Dickinson and Company and several other companies have set up their manufacturing plants in India. Several other companies are looking forward to open their manufacturing plants in developing regions.

North America to lead from the front

The North America nebulizer devices market is growing with every passing day through continuous innovation in technology. As the population in the region follows a fast moving lifestyle, patients are looking for more portable nebulizer devices that can be transferred easily in time of need for patients suffering from asthma and other airway or lung diseases (bronchitis and pneumonia).

The adoption of newly launched nebulizers with quick drug delivery coupled with high-end technological assessment with greater accuracy is gaining traction amidst the U.S. population, hence supplementing the growth of the global nebulizer devices market. For instance, Omron Healthcare, Inc. launched the Portable MicroAir Nebulizer device that is packed with super small nebulizers having VibratingMesh Technology and weighs 6 oz and fits discreetly in one’s palm. Taking a cue from this, market companies are developing portable devices that can be used by newborns suffering from various respiration problems such as COPD (Chronic Obstructive Pulmonary Disease), asthma, and others. Nebulizer devices are powered with rechargeable batteries and several different types of masks are also available for use in neonatal cases. 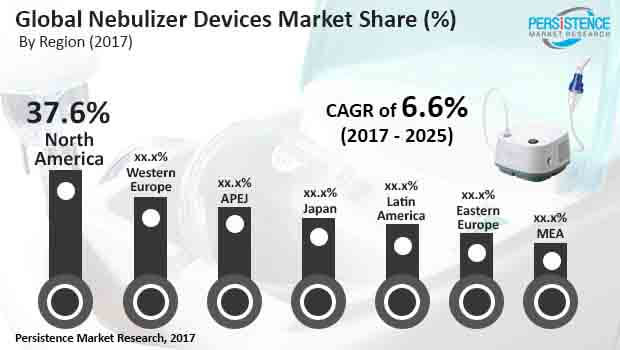 Asia Pacific to give tough competition to developed regions

The growing prevalence of chronic obstructive pulmonary disease or COPD in Asia Pacific has intensified the use of nebulizer devices in the region. Chronic obstructive pulmonary disease is a term used to describe a chronic progressive condition of lung disorders such as asthma and chronic bronchitis. As per the Journal of Thoracic Disease, the prevalence rate of COPD cases in China is 8.2% and is related to the increase in exposure to biomass smoke. According to the Journal of Lung, Pulmonary & Respiratory Research, it is estimated that there are 5 lakh deaths in India every year due to COPD. According to the World Health Organization, COPD prevalence in New Zealand is between 10% and 17% of the total population. According to the Lung Foundation Australia, 7.5% of Australians above 40 years of age suffer from COPD. Moreover, the growing disposable income of consumers in the region allows them to afford more advanced technologies and adopt better treatment options. As a result, the demand for nebulizer devices in the APEJ region is expected to intensify over the coming years.

A new report on nebulizer devices delivers in-depth understanding on the consecutive growth path of the market along with the future scenarios and present situation of the market. The report offers an exclusive analysis of the global market and also presents insights on regional and other important segments.

The report offers a summary of the global market including an official abstract that draws out the core instances progressing in the market. It also discusses on a couple of facets such as drivers, obstacles, and predictions that have been found in the global market. It also acquaints readers with figures related to volume, value, and development rate of the market from a growth point of view. With respect to the market segmentation, each segment has been thoroughly analyzed and presented in the report. The report also gives an assessment in light of the market condition, and moreover presents a value chain analysis of the products and applications in concern. A year to year evolution of the market has likewise been offered in the report for the reader to be predominantly aware of the altering scenario of the market.

The report is the end result of the cautious research work of the market analysts employing reliable sources. The information introduced has been studied carefully by our analysts. The data that has been presented here has been assembled from various tried and tested sources. The figures have also been checked by the analysts and can be used to settle on key decisions and to formulate strategies.

The market study conveys an overview of the overall scenario of the global nebulizer devices market. It features the competition prevalent among the present vendors in the market and also puts weight on the future circumstance of the market. The profile of the players is based on a SWOT examination sought down by company angle, product portfolio, strategies, finance related information, and year-to-year projections. The organizations have been explored minutely covering their key developments, innovations as well as mergers and acquisitions and agreements with other prominent establishments. The Porter’s Five Forces analysis has also been taken into account for research purposes in this report.

The reports_bk_01_01_2020 drafted by our industry analysts are credible and have been researched and validated from several primary and secondary resources. What makes us unique is the fact that along with presenting an analysis of the market’s historical and present scenario, we also present a forecast review of the market for the benefit of our readers. The presentation is exclusive in the form of various charts, tables, and diagrams. Every bit of information present in the market research report is unique. Expert estimations are also present in the study that can be directly used by the readers to make future decisions.