The global mattress market is witnessing steady growth with worldwide revenue up 6% Year-on-Year (Y-o-Y) in 2021, as per the mattress industry analysis done by Persistence Market Research. Sales of mattresses across the world are set to increase over the next ten years at a CAGR of around 7% and be valued at US$ 39 Bn, mainly backed by rising popularity of custom mattresses.

East Asia is predicted to be a lucrative market for mattress manufacturers, surging at over 11% CAGR through 2031. All in all, mattress sales account for around 15% share in the global bedding products market.

Historically, from 2016 to 2020, mattress sales increased at a significant CAGR, with the U.S., China, Germany, and U.K. holding higher shares in the global market.

Hotels are expected to hold a significant share in the global mattresses market, as they change their mattresses more often than residential end users. Some hotels/motels also prefer acquitting mattresses on rent.

Overall, over the next ten years, the market for mattresses is projected to expand faster than the historical years, at a CAGR of 7%.

More consumers are expected to purchase mattresses and mattress components through online sales channels, thereby boosting the online mattress market size. Customers will have a variety of options for customising mattresses to their specific needs and interests.

Furthermore, increased availability and sales of various mattresses have resulted from the growing popularity of online purchasing, as consumer trust Internet purchases due to speedier shipping services, price comparison, and availability of varied mattress offerings.

How is Inclination toward Orthopedic Mattresses Likely to Propel Market Growth?

As a result, mattress companies are introducing certified orthopedic mattresses to diversify their product lines and improve their market presence.

Why are Synthetic Mattress Products Losing Control in the Market?

The market for synthetic mattresses is being restrained due to growing awareness of the benefits of natural component mattress, such as latex foam mattresses over chemical-based PU foam mattresses.

Consumers are more concerned about their health and are looking for natural products that do not lead to any unwanted physical difficulties such as back pain or sleeping disorders. This inclination toward natural mattresses has negatively impacted the growth rate of the synthetic mattress category.

With rise in difficulties such as sleeping disorders and back pain, it is now more important than ever to use natural mattress components to get a good night's sleep. As such, organic mattresses have become a popular choice among customers. 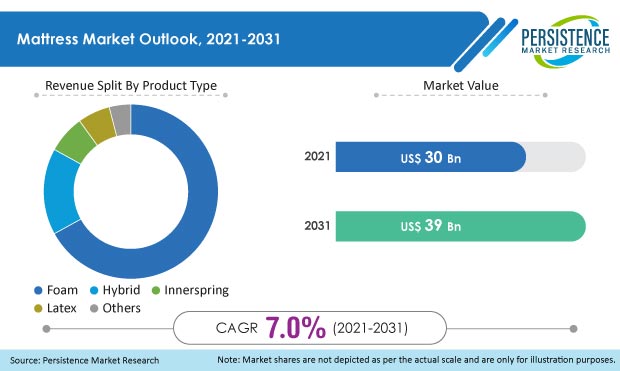 Will Growth of Affluent Aging Population in the United States Drive Mattress Sales?

Mattress sales in the U.S. is expected to progress at a CAGR of over 3%. According to the American Chiropractic Association, back discomfort is one of the most common causes of missed work. Half of all working Americans experience back discomfort symptoms at least once a year. Low-back pain costs the United States at least US$ 50 billion in annual healthcare expenditure.

Furthermore, the world is ageing at an unprecedented rate, with the number of people aged 65 and older expected to reach roughly 16 percent by 2050. There has been a rise in the number of persons suffering from health difficulties such as body discomfort, stiffness, back pain, and osteoarthritis, as the population in the United States has gotten older.

How is Growing Healthcare Industry Driving Mattress Sales in Europe?

Because of factory closures and supply chain issues caused by the COVID outbreak, the region's revenue dropped temporarily. However, the market is developing well following the COVID crisis.

Why is Demand for Mattress Increasing in China?

Mattress sales in East Asia are set to surge at over 11% CAGR through 2031, with China being the largest revenue contributor to the market in the region. China has risen in prominence as a major mattress manufacturing centre. Due to China's growing population, rising income levels, and booming housing market, the mattress business in China has grown quickly. Another important factor is the expansion of international trade.

Other variables affecting China's mattress industry include the speed with which existing houses are renovated, expansion of new houses, and innovation in conventional sleep concepts. In the Chinese mattress market, consumer groups are growing and there is room for more growth. As a result, demand for mattresses in the country is expanding rapidly.

How is the Mattress Industry Faring in Brazil?

Brazil is one of the fastest-growing economies in Latin America. The global downturn in economic growth had an influence on mattress manufacturing, but it is predicted to continue to rise positively.

Box type mattresses are gaining popularity in Brazil due to economic freight costs and market operations. Because the Internet keeps them informed about mattress varieties and saves them time, more consumers are purchasing mattresses through online channels.

Furthermore, there is increasing demand for and manufacturing of smart mattresses that possess the capability of keeping the body straight during sleep and applying proper pressure. As such, custom mattresses are high in demand in the country.

Why is Demand for Innerspring Mattresses Key to Revenue Generation?

A steel coil support system is used to support an innerspring mattress. The single unit spring and pocketed coil springs are two different types of spring systems. The amount of spring coils, spring form, and coil gauge all vary depending on the intended design and comfort. Padding and upholstery materials cover the innersprings. These mattresses are widely regarded as the most cost-effective and popular among a wide spectrum of customers.

Which Mattress Size is in High Demand?

Furthermore, the large range of options available in king size mattresses is complementing segment growth in a big way.

Which Sales Channel Holds Major Revenue Share in the Sales of Mattresses?

On the basis of sales channel, online retailing is expected to rise at impressive CAGR of 6%. Consumer tastes have changed as a result of the COVID-10 pandemic, and instead of shopping offline, they are flocking to online channels.

The COVID-19 outbreak had a detrimental influence on mattress sales in the first quarter of 2020. In order to comply with regulatory restrictions and prevent the virus from spreading, several market players ceased production across different countries.

However, in the first quarter of 2021, the industry gained traction. Retailers began giving free shipping and delivery to offline businesses in countries with few COVID-19 cases. Using this strategy, mattress vendors were able to clear enormous amounts of stock from their warehouses.

Work-from-policies further played a pivotal role in impacting market growth. The work-from-home culture resulted in physical problems, which further scaled up demand for orthopedic mattresses in the market.

Thus, work-from-home policies and growing trend of Internet shopping have been huge contributors in the mattress industry's growth during COVID-19.

Players operating in the market are finding new ways to introduce their products across regions. These measures and efforts are being undertaken due to rising competition. Well-established mattress manufacturers are taking a hard look at their marketing strategies. Strategic alliances and product innovation are having a strong influence on market growth.

Forging new strategic relations with key market players or suppliers to achieve major market presence will be an ongoing trend in this space.

What is the outlook for the global market for mattress for the decade?

The global mattress market is expected to surge at a CAGR of around 7% over the forecast period of 2021-2031 and top a valuation of US$ 39 Bn.

What is the size of the global market for mattresses at present?

The global mattress industry is currently valued at over US$ 30 Bn.

Who are the top 5 players manufacturing mattresses?

What are key trends shaping the global mattress industry?

Which are the top 5 countries driving most demand for mattresses?

Top 5 countries driving most of the demand for mattresses are the U.S., U.K., Germany, India, and China.

What is the outlook for the market for mattresses in East Asia?

Sales of mattresses across East Asia are projected to expand at a CAGR of over 11% through 2031.

Which countries are key exporters of mattresses across the world?

Key exporters of mattresses are China, the U.S., Japan, and Germany.

The global night cream market research report includes a competitive landscape that provides a dashboard view of the key competitors operating in the market.

Global sales of handheld marijuana medical vaporizers are expected to top US$ 26 Bn in 2031. According to the report by Persistence Market Research, the market is estimated to register an impressive CAGR of close to 22% during the forecast period of 2021-2031..

Men's Underwear market is expected to surge at a healthy CAGR of 6.3% over the decade, according to the men’s underwear market survey. The market in Germany is predicted to progress at a CAGR of 4.5% and the U.K. at 3.8% through 2031..