The electrostatic chucks (ESC) market has witnessed substantial growth in recent years, and is projected to expand at a CAGR of 5.5% over the next ten years, on the back of increasing application in semiconductor devices across the globe. These chucks are used across diverse applications, including dielectric etch and conductor etch. Considering this, expansion of securing, carrying, and correcting components such as wafers and glass plates will create increased scope for application, complementing growth over the coming years.

In its new study, ESOMAR-certified market research and consulting firm Persistence Market Research offers insights about key factors fueling demand for electrostatic chucks. The report tracks the global sales of ESCs in 20+ high-growth markets, along with analyzing the impact COVID-19 has had on the market, and what the years ahead will look like.

What is the Future Outlook of the ESC Market in Comparison to Historic Sales?

In the past few years, electrostatic chucks have become much more omnipresent in semiconductor manufacturing equipment. In addition to the eradication of moving parts, ESCs hold the commitment to dwindle wafer edge exclusion. Electrostatic chucks provide a technical advantage in terms of wafer planarity, non-edge exclusion, and high reliability.

Due to increase in demand for semiconductor wafers there would be substantial growth in demand for ESCs. These ESCs are the preferable choice for consumers due to their adapting to various tools over temperature. The main purpose of ESCs is to absorb the heating and cooling of wafers in the semiconductor industry.

Owing to the ongoing crisis caused by the COVID-19 pandemic, production and supply chain activities have seen a major slump. With a number of end users affected in regions such as the United States, Japan, South Korea, and Taiwan, supply and shortage in demand are expected to result in a significant drop in Y-O-Y growth. Yet, Persistence Market Research expects the global ESC market to expand at 5.5% CAGR through 2031.

What is the Commercial Potential of Electrostatic Chucks?

Electrostatic chucks are mostly used in the electronics industry, in electrical components, and also in semiconductor industries for different applications in a variety of semiconductor processes. 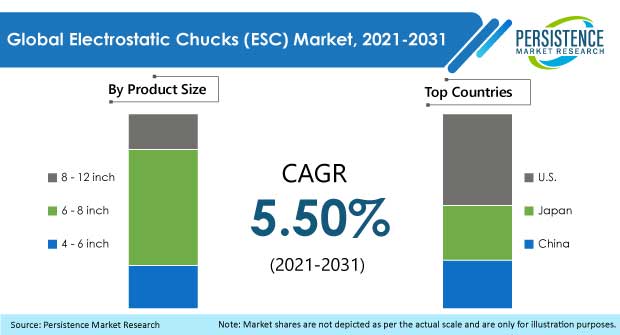 Is the United States a Lucrative Market for Electrostatic Chucks?

Persistence Market Research has projected the United States to remain one of the most lucrative markets throughout the course of the forecast period. One of the key factors supporting growth is the presence of skilled labor in the country owing to low-cost production of ESCs, which is helping the country become one of the leading suppliers across the globe. Moreover, the United States also has high demand for ESCs due to the presence of big semiconductor user companies in the country.

Apart from this, the United States is also known as a production hub for semiconductors due to the presence of a large number of industries and production plants based in the country.

How is Japan’s Industrial Technology Surging Demand for ESCs?

What’s the Outlook for Taiwan for Electrostatic Chucks?

Bigger the size of the silicon wafer, higher the number of microchips it is capable of holding. This also translates to efficient usage of material and time. China’s Semiconductor Manufacturing International Corporation announced in December 2020 to commence the manufacturing of 12 inch silicon wafers. Therefore, it is anticipated that China would account for higher grow of 8 – 12 inches of electrostatic chucks. China, which is constantly investing in increasing its production capacity of semiconductors, is expected to create high demand for electrostatic chucks. Also, China is one of the leading markets for ESCs due to the remarkable market share of end-use industries and large number of local players.

Electrostatic chucks find high application in semiconductors and mobile technology as a component in systems. Due to this, South Korea’s semiconductor, consumer electronics, and automotive industry witness high demand for ESCs.

Semiconductors has been the major industry over the past years in South Korea, with cheap labor/workforce for the manufacturing of semiconductors.

Which End Use is Most Prevalent for ESCs?

Which is the Preferred Product Type for Electrostatic Chucks?

6 – 8 inch ESCs are expected to lead in terms of both, market share and growth rate during the forecast period. The segment is expected to hold nearly one-third of the market value share throughout the forecast period, attributing to their high use and helping to make operations easy and high semiconductor usage.

The electrostatic chucks market is moderately competitive, with the presence of a large number of players operating in the market. Some of the players are focusing on carving a niche for a specific demography. The market has robust partnerships throughout the value chain, with high focus on innovation. Manufacturers are aiming at strategic collaborations with end users and regional distributors to address the requirements of an expanding customer base. Brand consciousness and aggressive marketing makes it challenging for new entrants in this market.

Q1. Which is the most lucrative market for ESCs?

Q2. Which are the top-selling electrostatic chucks?

6 – 8 inch ESCs are highly sought-after for many applications. The demand is expected to remain high in the near future, especially due to intense penetration in all regions.

Q3. Which is the most lucrative application for ESCs?

Q4. Which are some of the leading ESC manufacturers?

Yes, the research on the electrostatic chucks market has been conducted by expert analysts of Persistence Market Research, through a combination of primary research and secondary research. To know more about how the research was conducted, you can speak to a research analyst.