Global Market Study on Duvet: Rapid Growth of Hospitality to Orchestrate a Multitude of Opportunities

Rising per capita disposable income is increasing the purchasing power of people, which is allowing them to make huge investments for living luxurious lifestyles. Owing to this, the demand for luxurious products is increasing, which, in turn, is also increasing the demand for luxury beddings to feel rich and live a comfortable life. Increasing luxury bedding demand is also expected to propel the demand for duvets over the forecast period. From a regional perspective, Europe is estimated to account for a significant share in the global duvet market. This is because of the need for duvets across various end users such as hotels and residential, among others. This factor is expected to lay a strong platform for the healthy growth of the global duvet market.

In terms of global duvet market growth opportunities, the duvet demand in Oceania, with the growing demand for luxury beddings, owing to increasing travel and tourism activities, are expected to generate high demand for duvets. On the basis of material type, the cotton segment is expected to be a very lucrative segment throughout the forecast period in the global duvet market, with an expected market size of over 50.0% in 2019. The growing hospitality and service sector is projected to accelerate the growth of the duvet market in the coming years. 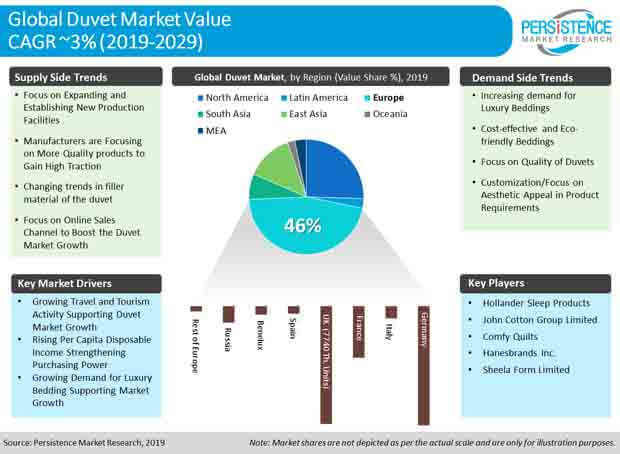 Duvets are also known as continental quits, Doona, and ralli quilts. Duvets are the most common form of bed coverings. Duvets have reduced the complexity of making a bed, unlike blankets and comforters. Duvets are associated with luxury bedding and changing lifestyles, and the increasing demand for luxury beddings that come with certain benefits such as easy to maintain and clean, and suitable for different climatic conditions, such as they can be made warmer than a blanket without becoming heavy. These factors make them a preferred choice across the globe. Additionally, growing hospitality related activities and travel tourism activities are increasing the demand for hotels, and have fueled the demand for beddings in this sector. Such factors are expected to lead to the growth of the duvet market across the globe in the coming years.

Increasing travel and tourism is projected to be key factor driving the global of the duvet market during the forecast period. According to the World Travel and Tourism Authority, the total contribution of the travel and tourism industry to the global GDP was US$ 11 thousand billion in 2017, which accounted for ~14.2% of total global GDP. With increasing travel and tourism, the hospitality and service sector has been growing significantly in the past few years. Growing travel and tourism will attract substantial foreign direct investments in tourism-driven countries, which will successively lead to the launching of numerous hospitality and service-related activities across countries. This factor is also expected to drive the growth of the luxury beddings market, globally, and consequently increase the demand for duvets over the forecast period.

As a part of their overall strategy, key market players have been focusing on expanding their production capacities in the emerging duvet markets of Europe, as this region accounts for a prominent share in terms of volume for cotton and polyester duvets, for residential and commercial end-use, and is thus observing a rise in the demand for duvets. Some of the key market duvet players are focusing on expanding their geographical footprints in North America and East Asia, with increasing travel and tourism activities, and hospitality sector, which is projected to create significant growth opportunities for duvet manufacturers. As a differentiating strategy, duvet market participants are focusing on cost reduction in their product offerings, and the development of new techniques for the production of duvets.

Persistence Market Research, in its recent study on the duvet market, offers a detailed value-volume analysis of the duvet market on the basis of various segments such as material type, bed type, sales channel, and region. In terms of material type, the cotton segment is projected to be a lucrative segment in terms of growth opportunities, since it is widely used in the textile industry, including household and commercial products.

Globally, rising per capita disposable income is boosting the demand for luxurious products. This is projected to increase the demand for luxury beddings, and, in turn, fuel the demand for duvets during the forecast period. There has been significant growth in the demand for duvets across various end users such as hotels, residential, and other hospitality services, which is projected to lay a strong base for the robust growth of the global duvet market in the coming years. Additionally, growing travel and tourism activities are also expected to boost the global duvet market during the forecast period.

The global duvet market report covers market analysis through basis point analysis (BPS), incremental dollar opportunity index, market attractiveness analysis, and Y-o-Y growth. The volume analysis for the duvet market has been considered in 'thousand units', covering data for the historical period 2014-2018 and forecast for 2019-2029, with 2018 as the base year.

An Overview of the Duvet Market Report Chapters

The next section of the duvet market report begins with market definitions, market taxonomy, product overview, their application downstream, and the research scope of duvets.

The next section that follows in the global duvet market report includes macroeconomic factors, along with value chain analysis, drivers, restraints, trends, and opportunities that have a profound rate of influence on the growth of the duvet market. The information has been backed up with suitable examples and facts as obtained from official and authentic data credentials in the duvet market.

The next section provides a pricing analysis of duvets on the basis of regional fronts, wherein, a weighted average price has been computed to arrive at global average prices. The primary objective of the duvet market report is to offer key insights on competition positioning, current trends, market potential, growth rates, and other relevant statistics.

The first stage of research entailed the formulation of a preliminary hypothesis, which was considered from primary as well as secondary approaches. To analyse the duvet market share and competition analysis, we tracked key developments in the duvet market, such as collaborations, expansion, mergers & acquisitions, new orders, product launches, and awards and recognitions for companies operating in the market. Competition benchmarking has been provided for the top 5 competitors with respect to the sales performance of duvets.