The use of cerium in catalysts is projected to increase at a similar rate (3.8%) CAGR over the next ten years.

How is the Cerium Market Evolving?

The sales opportunities in the cerium market are mainly driven by the increasing demand for rare earth metal catalysts from different manufacturing sectors. China and some other Asian countries will account for high demand opportunities in the industry over the coming years.

“Increased Use of Cerium for Different Applications”

Cerium is used for different applications; for instance, in self-cleaning ovens and flints in lighters. In addition, cerium is also used to add colors to glass and ceramics and as a polishing powder. Further, increased exploration of unmined reserves as well as recycling of cerium metal from e-waste is predicted to create growth opportunities for players in the market.

There is a constant fluctuation in the prices of cerium, which is likely to restrict the sales opportunities in the market. The high dependency of the global market on China is also likely to act as a major market restraint over the coming years. 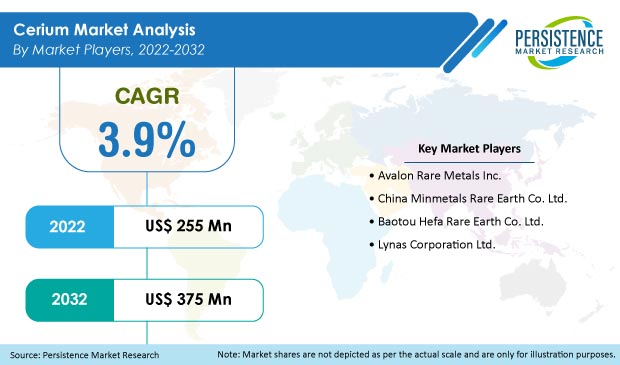 Out of all the regional areas, East Asia is likely to hold a leading position in the global cerium market. Japan and China are key contributors fueling the demand for cerium in the market. The electronics sector, owing to increased demand for cerium, is playing a vital role in stimulating expansion avenues across the industry.

The North America market is also predicted to grow at a significant rate over the coming years. The rapid growth of the regional market is attributed to decreasing dependency on China and the use of many manufacturing techniques for cerium. Growing demand for industry products in the North American region is likely to result in an increased count of explorations and investments.

Europe is anticipated to serve as a stable market for cerium over the decade. Lastly, the rest of the world is estimated to exhibit average demand for cerium through 2032.

Cerium is a very soft and ductile metal that oxidizes very easily in the air. The metallic cerium is manufactured using a metallothermic process which in turn gives cerium of higher purity. Cerium is used as catalysts and adhesives in numerous commercial applications. Cerium exhibits properties similar to that of calcium and accumulates in the bones in small amounts. Cerium can be found in small amounts in barley and tobacco plants.

The global cerium market is anticipated to expand at a CAGR of 3.9% through 2032.

The current valuation of the cerium industry is US$ 255 Mn.

Catalysts account for a major market share and cerium in them is set to increase at a CAGR of 3.8% through 2032.