Anticancer, or antineoplastic drugs, are indicated in the treatment of malignancies. Cancer is characterized by the rapid explosion of abnormal cells beyond their boundaries, and invading adjoining organs resulting ultimately in death. According to the world health organization cancer is a leading cause of death worldwide, accounting for 8.8 million deaths in 2015.

The global anticancer drugs market report also provides qualitative analysis in terms of market dynamics and future growth opportunities for the manufacturers of anticancer drugs across the globe.

The global anticancer drugs market is expected to be driven by rise in incidence of cancer, growing healthcare expenditure and improved infrastructure for drug development. The increasing risk factors such as exposure to carcinogens, tobacco and alcohol use, sedentary lifestyles and infections is driving a large cancer burden.

Likewise, favorable reimbursements and the shift of cancer towards developing countries owing to rise in risk factors such as industrialization, sedentary lifestyles, exposure to carcinogens are some of the other key factors expected to propel the revenue growth of the anticancer drugs market.

Besides, increasing out-of-pocket healthcare expenditure in both developing and developed economies and the development of large cancer specialty hospitals are also expected to boost the growth of the market for anticancer drugs. The growing awareness of breast cancer, improvements in survival rise in women’s income is another driver of the global anticancer drugs market.

However, high cost of anti-cancer drugs, serious side effects, poor quality of life after treatment, and low survival rate owing to difficult to treat cancers such as lung cancer are factors expected to restrict the growth of the global anticancer drugs market over the forecast period. 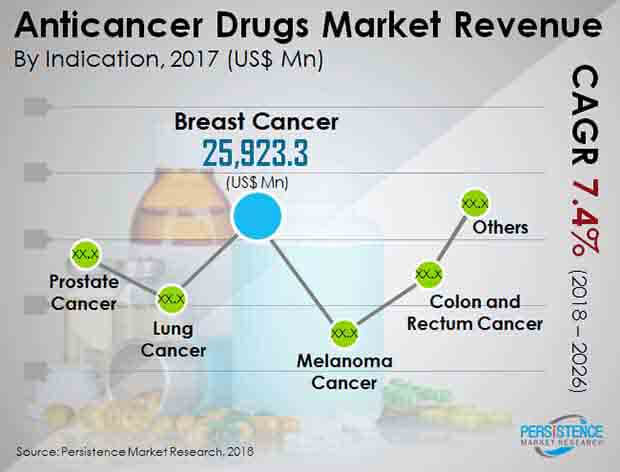 North America dominated the global anticancer drugs market accounting a leading share in 2017, and is expected to witness rapid growth over the forecast period. The North America market is dominated by the U.S. owing to its larger economy, attractive reimbursement and larger prevalence of cancers.

Europe, is expected to be led by Germany. The U.K., and France, are other prominent countries expected to witness significant growth in the global market owing to large presence of key players. There has been a definite shift of the diseases towards the Asia Pacific regions such as China, and India. Increase disease incidence in developing regions has increased the market attractiveness of the global market for anticancer drugs owing to higher demand. China and India are driving a large revenue market owing to unmet needs and the high mortality rates of cancer in the region.

Africa region have a lower incidence of cancers. The Middle East and Africa market is expected to be dominated by the gulf economies owing to their high income and growing expanse of healthcare.

The global market for anticancer drugs is dominated by the a few key players, contributing more than 70% of the market share. The key players operating in the global anticancer drugs market are AbbVie Inc., Bayer, Pfizer Inc., Bristol-Myers Squibb, Roche Holding AG, Eli Lilly & Co, Novartis AG, Astra Zeneca, Johnson & Johnson, and Celgene, among others. Launching new products and acquisitions are the key strategies adopted by the key players in the anticancer drugs market. Research and development collaboration among players coupled with the FDA’s fast track approval for life saving conditions is driving a large market enthusiasm.

Many players are investing in biologics research and development to overcome the drawbacks of traditional small molecule anticancer drugs such as side effects, lower selectivity for cancerous cells and their lower efficacy and effectiveness. Targeted drug therapy exploits the qualitative differences between cancer and normal cells resulting in lower side effects and greater efficacy and effectiveness.