Furthermore, developing regions, such as South Asia and Pacific and MEA, are estimated to witness a steady growth spurred by rapid economic development. These regions are estimated to hold a prominent share in the 2-ethylhexanol market during the forecast period. Moreover, the Asia Pacific region had substantially gained significant market share compared to North America & Europe. 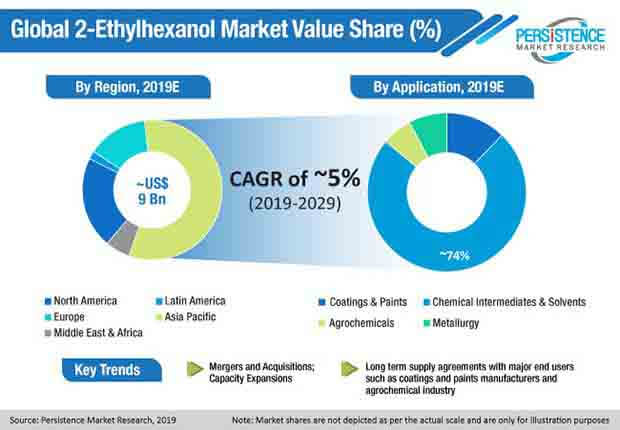 2-ethylhexanol products have been listed as ‘Inert Ingredients Permitted for Use in Non-food Use Pesticide Products, and in Food Use Pesticide Products with Limitations’ under the Federal Insecticide, Fungicide, and Rodenticide Act (FIFRA) by regulatory bodies, such as the U.S. EPA. This has been translating into preferred applications of 2-ethylhexanol in agrochemicals, such as pesticides.

2-ethylhexanol delivery requirements for smaller quantities ranging from 1,000 to less than 10,000 liters entails the use of small drum volumes or intermediate bulk containers (IBCs) for delivery. Besides, IBCs are reusable, can be easily stacked, are easy to handle during transport, and have been proven to be a preferred choice in case of small deliveries over short distances. As a result, distributors of relatively smaller volumes of 2-ethylhexanol have been preferring drums & IBCs as the mode of delivery to their clients, such as small-scale manufacturing plants that produce coatings, paints, plastics, agrochemicals, etc.

Expansion of business by manufacturers of 2-ethylhexanol into new geographical locations has been translating into business opportunities for local & regional distributors to collaborate with manufacturers for more efficient and fast sales deliveries, thereby augmenting the market size. This is expected to positively impact the market in near future.

LP Oxo (Low pressure oxo alcohols) technology is proving to be a leading technology for use in the manufacture of oxo alcohols, such as 2-Ethylhexanol, from olefins. In the near future, this is expected to contribute to the growth of 2-ethylhexanol in agrochemical applications as well.

The global 2-Ethylhexanol market is evenly balanced between large players, who hold ~40-50% share in the overall market, with presence through regional and local distributors. Key strategies are the expansion of production capacities and focus on mergers and acquisitions to increase their global and regional footprint in the 2-Ethylhexanol market.

The 2-ethylhexanol market is characterized by the presence of few big players from Europe and the Asia Pacific region. The flexitanks sector is expected to dominate the global 2-ethylhexanol market throughout the forecast period. However, the impact of unfavorable regulations encouraging the adoption of 2-ethylhexanol substitutes are likely to hinder the market growth globally.

Technological innovations by key market participants will also give impetus to the 2-ethylhexanol market. The scope of increasing applications related to the use of 2-ethylhexanol is estimated to bolster the growth of the market during the forecast period.

Key indicators of market growth, which include Year-on-Year (Y-o-Y) growth of the market, value chain, supply chain analysis, and Compounded Annual Growth Rate (CAGR) are explained in PMR’s study in a comprehensive manner. This information can help readers understand the quantitative growth prospects of the 2-Ethylhexanol market during the forecast period.

The study also includes statistics as well as facts related to the macro as well as microeconomic factors that are impacting developments in the market. It also offers actionable insights based on the future trends in the 2-ethylhexanol market. Furthermore, small businesses and new entrants in the 2-ethylhexanol market too can make use of the information presented in this study, based on which, they can make appropriate business decisions in order to gain momentum in the market.

Key Segments of the 2-Ethylhexanol Market

PMR’s study on the 2-ethylhexanol market is divided into three significant segments, such as delivery form, application and region. This report offers comprehensive data and information about the important market dynamics and growth parameters related to these categories.

Secondary resources referred to analysts during the production of the 2-ethylhexanol market study include statistics from governmental organizations, trade journals, white papers, and internal and external proprietary databases. Analysts have interviewed senior managers, product portfolio managers, CEOs, VPs, marketing/product managers, and market intelligence managers, who contributed to the development of this report as a primary resource.