Global Market Study on Schizophrenia Treatment: Use of Phenothiazine Antipsychotics to Increase in the Near Future

According to World Health Organization, in 2013, approximately 50 million people in the globe were suffering from schizophrenia. Even though the rate of schizophrenia is reducing, the treatment rate and prescription rate for this disorder is increasing, consequently creating potential growth opportunities for schizophrenia treatment.

The diagnosis rate of schizophrenia has also increased since past several years, owing to increasing footfall of patients. Post the introduction of the first atypical antipsychotic treatment for schizophrenia in 1970, the rate of treatment seeking has considerably increased owing to less side effects of atypical psychotic medications.

Several players involved in schizophrenia treatment market are concentrating on building commercialization and research alliances with a view to exploit prospects. For instance, in 2014, Vanda Pharmaceuticals entered into a sub licensed agreement with Novartis that ultimately resulted into global licensing from Novartis related to fanapt. In 2016, Astella collaborated with Astra Zeneca in order obtain exclusive rights from Astra Zeneca to manufacture quetiapine fumarate.

The synergy generated through collaborations and partnerships is creating a positive and immediate growth impact as compared to mergers and acquisitions. In addition, manufacturers of schizophrenia medications are focusing on grasping new opportunities for revenue generation. To achieve this, manufacturers are targeting emerging markets for potential growth opportunities.

There are several medications for schizophrenia. Of these, atypical antipsychotic treatment, a second generation antipsychotic medication, is highly used owing to comparatively less side effects and high effectiveness of the medication. The atypical antipsychotics segment in the product type category is projected to expand at a high rate during the forecast period to reach a valuation more than US$ 1 Bn by the end of the period of assessment (2027). 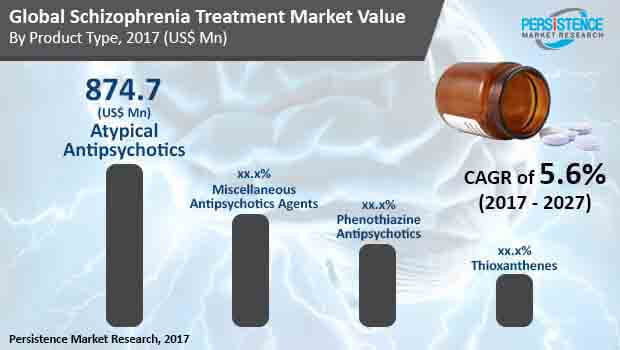 Of these, haloperidol and lithium are the most referred choice of physicians due to their higher effectiveness and comparatively low pricing. The miscellaneous antipsychotic agents segment is projected to expand at a value CAGR of 6.1% throughout the period of assessment.

Global regenerative therapies market is expected to expand at a CAGR of 20.0% during the forecast period 2016 - 2022. Check share, size, revenue, CAGR & key players.

Global pneumatic compression sleeve segment is projected to be the most attractive segment with a market value of more than US$ 200 Mn in 2017 and set for valuation of US$ 670 Mn by 2025 end.