Reducing arable land and decreasing resources have increased the pressure on the supply-demand chain in the agricultural sector. This has led to the emergence of innovative crop protection products in order to secure agricultural produce. Changing climatic conditions and environmental status, as well as increasing emergence of various weeds and herbs have had a negative impact on the quality as well as yield of crops.

Thus, there has been an increase in the demand for several crop protection products such as herbicides and herbicide safeners.

However, Asia Pacific region is expected to grow at a high pace in the herbicide safeners market over the forecast period. 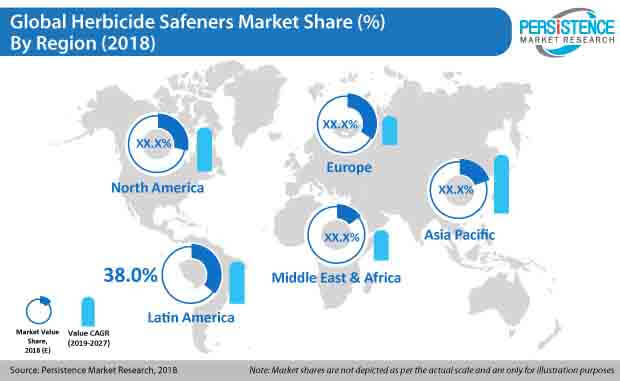 North America follows Latin America in terms of value share in the global herbicide safeners market. Asia Pacific is expected to grow at a rapid pace with a high CAGR of about 8.5% from 2019-2027 in the global herbicide safeners market, owing to the increasing cultivation of wheat, rice, sorghum, and maize crops in the region. Europe is expected to show steady growth, being a mature market. The Middle East & Africa is expected to have a lower share as compared to other regions, owing to lesser agricultural activities in this region.

Thus, considering all the factors, the global herbicide safeners market is expected to grow positively in terms of value and volume over the forecast period.

The subsequent sections analyze the global herbicide safeners market on the basis of type, application stage, crops, and region, and presents a forecast for the period 2018–2027. The market is segmented as follows: