The world economy and its impact on various countries and industries can be observed with several considerations. The need for industrialization across the globe has boosted urbanization. Changing lifestyles in rapidly changing economies affect the spending behavior of consumers. Consumers are concerned about maintaining their social status.

This inclination has influenced food manufacturers to shift their focus to offer edibles enriched with omega 3, vitamins, natural anti-oxidants, and other ingredients that are good for health.

CVDs (Cardiovascular diseases) are one of the main causes of mortality and morbidity globally. These diseases occur due to multiple gene interactions as well as environmental factors such as dietary habits and sedentary lifestyles. The quality of edible oils is widely considered to be intricately related to the pathogenesis of CVDs. Edible oil is among one of the vital dietary components in regular food intake. However, edible oils can be deteriorated by continuous heating that causes lipid oxidation.

The repeated usage of frequently heated edible oil is not unusual as it reduces the cost of food preparation. However, its negative impact is captured in the resultant products due to the oxidation of lipids during the heating process. Prolonged intake of food cooked in repetitively heated oil has been revealed to increase total cholesterol, blood pressure, and also lead to vascular inflammation.

The manufacturing of edible oils involves high precision processing as it is categorized in the range of premium quality products. In order to tailor to the increasing demand for high-quality edible oils, major players in the oil market are concentrating on the adoption of advanced technologies such as cold-pressing and refining technologies for oil production.

This allows manufacturers to produce high-quality edible oils efficiently and effectively. These technological advances support edible oil manufacturers for their product positioning in the finest division. 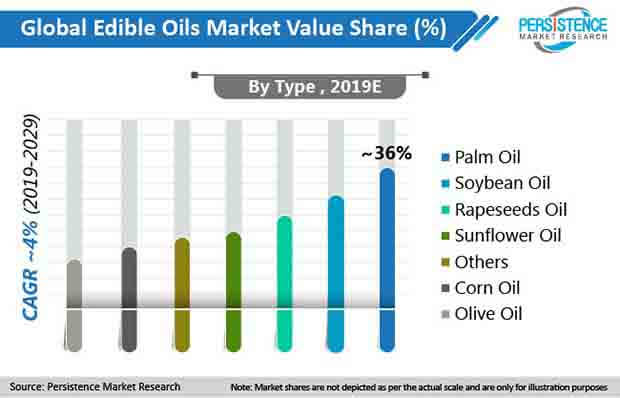 Applications of Edible Oils in Cosmetics and Personal Care Products

This has improved the market shares as well as market infiltration of these two regions. South Asia and East Asia are anticipated to grow at a promising CAGR during the forecast period. The Middle East and Africa market will also showcase a higher growth rate in comparison to other regions.

The wide edible oil market outlook has led our analysts to conclude that the global edible oils market is predicted to develop at a substantial rate with South Asia and East Asia holding the highest growth potential during the forecast period in the global edible oils market. An increase in innovations in technology and the development of new products such as organic as well as low-cholesterol oils coupled with health benefits is stimulating the demand for edible oils across the globe.

Market players are investing in acquisitions & mergers, and are using their expertise in the usage of the innovative technology will provide gain profitability and momentum in the global edible oils market. However, the additional costs associated with the processing of oils could restrain the growth of the edible oils market.

PMR’s study on the global edible oils market offers information about the market by dividing it into 5 important segments- product type, nature, end use, distribution channels, and region for comprehensive and detailed insights.