From 2017 to 2021, electric two wheeler sales increased at 9.9% CAGR, which was slower than expected because of massive production shutdowns in 2020 due to COVID-19. China, the United States, Germany, Spain, Australia & New Zealand, and Japan accounted for a large share in the global demand for electric two wheelers.

Important developments in the electric two wheelers business will be related to battery technology. Improvements in Li-ion batteries, for example, have resulted in lighter and longer-lasting electric two wheel vehicles than NiMH and lead-based batteries.

As a consequence of increased concerns among electric two wheeler producers regarding the development of superior battery technologies with longer shelf lives, further research & development will drive demand growth of electric-based two wheelers.

E-two wheelers are increasingly being used for ride-sharing and deliveries that demand high-performance and long-range services. Several additional features introduced by both, established and developing firms, are expected to attract more delivery and ride-sharing companies, which will drive the demand and sales of electric two wheelers. 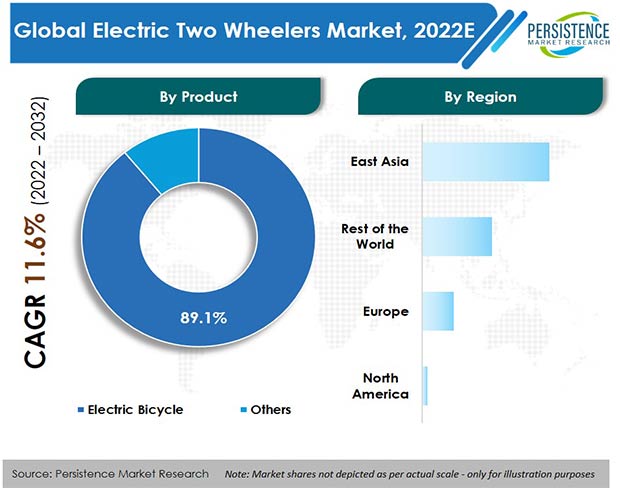 “Need to Move Away from Fossil Fuel to Aid Market Expansion”

Electric two wheeler prices vary depending on the type of battery installed in them. Currently, lead acid battery-powered electric two wheelers are preferred in developing economies such as China and India due to the higher price of lithium-ion batteries. However, lithium-ion batteries are anticipated to enjoy a larger market share going forward due to their light weight and larger capacity.

Additionally, lithium-ion battery-powered electric two wheelers are highly efficient because of their faster charging capacity and longer durability. With rising supply of raw materials, the cost of lithium-ion batteries is anticipated to reduce, resulting in lower cost of battery packs and increasing demand over the projection period.

Surge in the electrification of road transport has resulted in major increase in the demand for electric batteries. Due to increasing preference for recreational activities, customers are more inclined toward electric two wheelers for longer rides. Increasing longer rides using electric mobility solutions will drive demand for battery packs.

Manufacturers have developed battery range extenders for customers who want to enjoy longer rides, and this also has an easy installation process.

Increasing demand for e-bicycles and e-bikes will also drive demand for range extenders on a global level.

What Roadblocks Do Electric Two Wheeler Suppliers Need to Overcome?

Though manufacturers supply charging systems for use in a house or business, public battery charging stations are significantly less and not so readily available for customers in the event of a low battery emergency.

The EV market might face challenges due to its huge dependency on charging stations and its infrastructure. To create an electric vehicle-friendly world is by far the biggest challenge for manufacturers and government authorities.

The China electric two wheelers market is likely to expand at CAGR of 11.3%, with an absolute dollar opportunity in market value of US$ 21.25 Bn.

Due to high demand for electric two wheelers in China, several market players have introduced new dimensions and designs with additional features in recent years. Manufacturers are releasing bikes that are built to last long, require less maintenance, and are eco-friendly.

What are the Market Projections for the U.S.?

Over the next several years, the United States is expected to become one of the most attractive markets for electric two-wheelers, rising at a CAGR of 10.5% with an estimated absolute potential of US$ 783.3 million.

Strong collaboration and cooperation between sales, service, R&D, and workshop management are priorities for companies in the country. As a result of these shifting market conditions, the United States is anticipated to see significant market expansion in the future.

How is the Indian Market for Electric Two Wheelers Performing?

Moreover, increased investments in the e-mobility industry, as well as continuous developments in battery technology, such as better miles per charge and energy efficiency, are likely to drive the sales of electric two wheelers in the nation.

As infrastructure expands and people increase, economic rules in terms of pollution management will change. As such, India is likely to become a highly-valuable market for electric two wheelers over the coming years.

What Makes Germany and the U.K. Lucrative Markets for Electric Two Wheeler Manufacturers?

Amongst the countries in Europe, Germany and the U.K. resemble fast-growing markets for electric two wheelers, projected to expand at CAGR of around 10.9% and 9.6%, respectively, with estimated absolute dollar opportunity in market value of US$ 1.28 Bn and US$ 712.8 Mn respectively, over the forecast period.

Electric two wheeler suppliers from China are putting in their best efforts to develop their network and distribution channels in Europe through strategic collaborations and service support. Thus, Germany and the U.K. are expected to emerge as lucrative markets for electric two wheeler providers in the new phase of globalization.

Which Type of Electric Two Wheelers Will Lead Market Expansion?

The electric bicycles segment is majorly responsible for demand growth of e-mobility transportation. The main reason is linked with end use and application in large numbers for delivery and ride sharing purposes, and the market is likely to see an upward trend over the coming years.

What Kind of Battery is Preferred by Electric Two Wheeler Producers?

Lithium-ion and lead-acid batteries dominate the market due to their early acceptance in the electric two wheelers industry.

Because of high energy density, longer charge cycle, and low self-discharge rates, these batteries last for a long time. These batteries give superior performance, less maintenance, and are environmentally beneficial, which is why they are commonly used in e-bikes and are likely to see increased sales over the next few years.

Production and supply chain activity slowed as a result of COVID-19. With a large number of end consumers affected in nations such as the United States, China, and Japan, considerable decline in Y-O-Y growth was experienced.

Nonetheless, when the economy recovers from the pandemic, demand for electric bikes will rise rapidly. The sector is gradually rebounding as numerous production facilities reopen, resulting in favorable sales of electric two wheelers.

The worldwide electric two wheelers market is moderately competitive in nature with the presence of a large number of players operating across the landscape. Major market players are expanding their reach and market share as well.

Over the years ahead, international market players are set to expand their presence through acquisitions. Better global economic situation and rising auto industry, especially in emerging economies, are anticipated to drive market growth, encouraging players to launch new products across regional markets.

What is the size of the global electric two wheelers market?

The global electric two wheelers market size is currently valued at close to US$ 19.66 Bn.

What is the predicted growth rate for electric two wheeler sales?

Which are the most lucrative markets for electric two wheeler suppliers?

China, Germany, the United States, U.K., and India are set to be the most lucrative markets for electric two wheeler manufacturers, with East Asia projected to hold the highest market share of more than 64.5%.

Who are the top 5 electric two wheeler manufacturers?

How is the electric two wheelers market shaping up in China?

The China electric two wheelers market is expected to surge at 11.3% CAGR through 2032.

Global electric vehicles market is projected to grow at an impressive CAGR of 15.6% in terms of revenue generated over the forecast period from 2016 to 2030.

The global electric bus market is set to grow exponentially at a spectacular rate by the end of the years 2027. The augmenting global focus on promoting electric mass transit solutions is expected to primarily drive this market growth..

Global electric vehicle market is expected to reach a humungous revenue of $800 Bn by 2026 end, and grow at healthy CAGR of 23% during forecast period of 2021-26.

Global eVTOL aircraft market to expand at an impressive CAGR of more than 21% over the forecast period of 2021-2031..