For instance, in India, initiatives to meet the electricity needs have been undertaken rapidly, especially in villages, where more than 85% villages have been electrified. This trend has prompted an increase in power generation and installed base, and formed a wider transmission and distribution network in India. Though the supply of electricity is still below par in most of the newly electrified villages, efforts are being made to meet the demand and provide uninterrupted power supply. The government has further planned to electrify ~5.5Cr households by 2018, stimulating higher sales of electrical equipment to efficiently supply electricity to each household, propelling the electrical conduit pipe market. 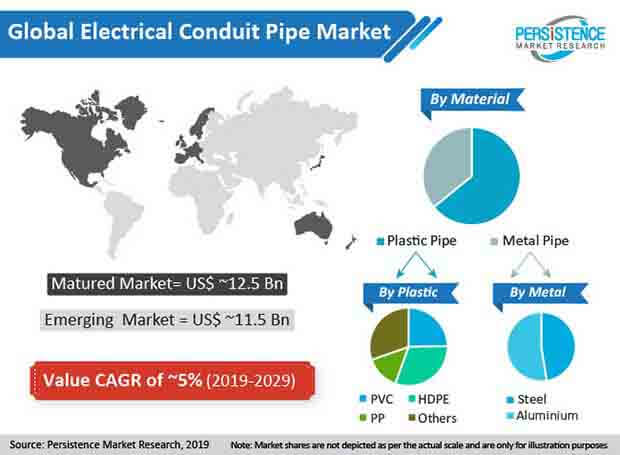 Growing commercial and industrial activities boosting the demand for electrical conduct pipes due to its wide spread consumption during the construction of residential, commercial, and industrial buildings.

According to the United Nation, the urban population has grown rapidly from ~751 Mn in 1950 to ~4.2 Bn in 2018. Asia, regardless of its moderately low level of urbanization, is home to ~54% of the world’s urban population, followed by Africa and Europe with ~13% each. Moreover, the urbanization in Asia is now close by ~50%. In contrast, Africa remains mostly rural, with ~43% of its population living in urban areas. The global rural population is now ~3.4Bn and is estimated to rise slightly and drop to ~3.1Bn by 2050. By 2030, it is anticipated that there will be 43 megacities with more than 10 million inhabitants worldwide, most of them in developing regions.

Market Expansion by Manufacturers to Increase their Global Footprint

Over the past five years, an increase in the number of consolidation and expansion activities have been witnessed in the electrical conduit pipe market. This can primarily be attributed to the efforts being made by companies to meet the rising demand for electrical conduit pipes, gain access to high-growth markets of Asia Pacific, and strengthen their foothold in regions. For instance, the Indian Railway network stretches more than 67,000 RKMs (Route Kilometers) in the country, out of which, 27,999 RKMs have been electrified by the end of March 2016, based on the statistics published by the Ministry of Railways. This electrification propels the electrical conduit pipe market in the region.

Regulation on Plastic Production to Hinder the Market Growth

Government authorities have set guidelines to regulate the wastage of plastic and encourage recycling of plastics. These regulations are frequently proven to be restraints for the plastic production market and induce manufacturers to produce standardized products. These guidelines are also affecting the cost of manufacturing, and is expected to decrease the demand for plastic conduit pipes in the forecast period. Increasing plastic waste and strict norms regarding plastic products, are anticipated to impede the growth of the electrical conduit pipe market.

Presence of large number of unorganized players in the electrical conduit pipe market is anticipated to hold more than ~50% of the market share. Market players that comes under the organized sector have strong regional, sound operations, and sales infrastructure, majorly across the Asia Pacific with few of them having global presence. Key strategies are the expansion of manufacturing facilities and launching new products to strengthen their portfolio. These companies have acquired regional enterprises in domestic as well as overseas territories to have prominent shares in the electrical conduit pipe market.

In March 2016, Aliaxis Group S.A acquired the pipes business assets of Australia-based Zezt Pty Ltd., which is mainly engaged in the manufacturing of polyethylene pipes for fluid and gas transfer, telecommunication and ventilation, among other applications.

In 2016, Wienerberger AG acquired a plastic pipe producer company in Finland for increasing its footprint in the Western Europe electrical conduit pipe market.

Key indicators of the market growth, such as supply chain and value chain analysis, Compounded Annual Growth Rate (CAGR), and Year-on-Year (Y-o-Y) growth of the market are explained in PMR’s study in a comprehensive manner. This information can help readers understand the quantitative growth prospects of the electrical conduit pipe market over the foreseen years.

The report includes statistics and facts related to the macro as well as microeconomic factors that are impacting developments in the market. The report also offers actionable insights based on the future trends in the electrical conduit pipe market. Furthermore, small players and new entrants in the electrical conduit pipe market can also use the information presented in this report to make business decisions and gain momentum in the market.

PMR’s study on the electrical conduit pipe market is divided into five significant segments such as material type, end-use industry, product type, application, and region. This report offers comprehensive data and information about the important market dynamics and growth parameters related to these categories.