More than 40% of the potato flour produced in the United States is used as an ingredient in the making of bakery products.

Demand for products offering several health benefits is witnessing an upward trend in the United States. Potato flour is a fine powder made from dehydrated potatoes, which is a good source of essential nutrients such as vitamin A & carbohydrates and contains a low level of glycemic index, which helps in lowering blood sugar levels and reduces the risk of heart disease.

Due to the various processing techniques, the market is bifurcated into potato flakes and potato granules. Flakes are fine crumbs and pieces, while granules exist in the form of powder.

This multi-purpose flour sees high demand from the food sector, which will majorly boost the prospects of the potato flour industry in the U.S. Consumption of potato flour in the U.S. is likely to surge as the vegan population grows and plant-based production increases across the country.

Potato flour has strong demand among U.S. consumers and has gained prominence in the retail/household industry due to its versatile nature, wherein, it’s primarily used as a thickener, binder, and flavor enhancer in soups and other processed foods.

In the U.S., potato flour is expected to show significant demand growth and register a CAGR of 6.4% over the forecast period of 2022-2032. 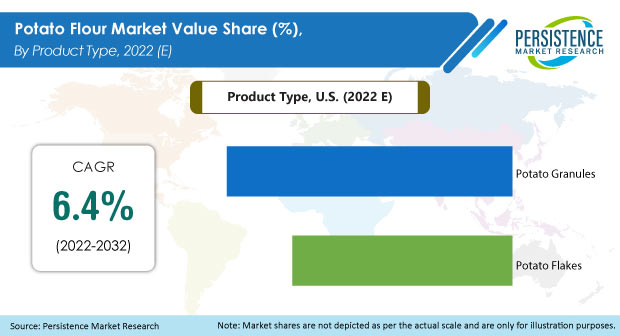 Which Market Factors are Shaping Demand for Potato Flour in the U.S.?

The baking industry plays an important role in the U.S. market and demand for various baked products among consumers is increasing at a rapid rate due to changing lifestyles and the rising trend of dining out. Potato flour is a versatile ingredient that bakery experts prominently use to produce several innovative products.

Potato flour, being a multi-purpose grain-free flour, has several functions, and its low-protein content makes it highly suitable for tender baking applications such as cakes, muffins, pie crusts, and some cookies. Flour, when incorporated into baking, provides a distinctive flavor and texture that makes it more useful in pancakes, quick bread, muffins, and banana bread. It has an excellent water-retention capacity that aids in producing moist yeast bread and rolls.

Also, many food creators have found that sweet potato flour added to bakery products extends their shelf life significantly. Longer shelf life not only ensures product usability for a longer period but also reduces the chances of processed product oxidation with the amount of antioxidants in them.

Potato flour is a farinaceous food product made from whole peeled potatoes that is fine in texture. On other hand, wheat flour is a powder containing gluten made by grinding grains. Potato flour, being a gluten- and grain-free product, is gaining traction among consumers. Home bakers, food manufacturers, and culinary professionals across the U.S. prefer it as an ideal substitute for wheat flour.

Potato flour is mostly chosen over wheat flour due to its ability to lower the risk of celiac disease, which is an autoimmune disorder. Gluten present in wheat, barley, and rye flour may cause inflammation that has a negative impact on the small intestine’s lining, which causes digestion issues. Potato flour is low in protein and is very easy to digest due to the presence of resistant starch and helps in blood sugar management.

Furthermore, the trend of incorporating gluten-free diets among U.S. consumers is increasing due to growing awareness of the negative impact of gluten, which might cause serious health issues. Moreover, various pieces of evidence indicate that U.S. retail sales of gluten-free products continue to grow and consumers are preferring them more than ever.

As a result, potato flour is considered one of the best plant-based foods because it has an equivalent level of nutritional value, thereby driving its consumption.

Organic food is considered healthy as it is grown naturally without the use of artificial chemicals such as pesticides and fertilizers. Moreover, consumer behaviors and purchasing habits have changed as they are highly health-conscious and prefer to buy products that do not contain synthetic additives. Similarly, in the U.S., the organic food market has accelerated rapidly and rising consumer preference for naturally-grown foods has opened up new market opportunities for food manufacturers.

Major U.S. manufacturers, suppliers, and distributors are introducing organic potato flour in their product lines, while some producers of conventional products have also introduced organic food to their portfolios. As a result, potato flour is expected to flood supermarkets, conventional stores, and direct-to-consumer markets. Furthermore, due to rising disposable income, consumers are ready to pay more for organic products, which are likely to propel the potato flour market across the U.S.

Potato flour is a powder or set of granules that are prepared through dehydrating potatoes using state-of-the-art equipment, and the complete process - from growing the potatoes to producing the flour or flakes - is scrutinized by a quality assurance team.

Major players with expertise emphasize on the whole process that requires a significant financial commitment and a group of specialists with in-depth knowledge of high-quality flour, raising the cost of production and acting as a market restraint.

Why are Potato Granules Most Widely Used in the U.S.?

Based on product type, the potato granules category holds the largest market share. However, potato flakes are anticipated to boost over sales because of increasing demand in the food industry.

Which End Use of Potato Flour Will Account for High Revenue Streams?

Based on end use, the potato flour market is segmented into the food industry, foodservice, and retail/household. The food industry holds a major value share in the U.S. market at 64.1% in 2022, with the segment currently valued at US$ 68.5 Mn.

Companies involved in the production and distribution of potato flour are focusing on offering clean label and non-GMO certified products in the U.S. marketplace. Manufacturers are emphasizing providing potato flour according to the benchmark set by various end-use industries.

Moreover, consumers nowadays make choices and buy products by reading the information and attributes present on the labels. Thus, major players are leveraging this opportunity and using it as a key strategy to drive their potato flour sales across the United States.