The rate of smartphone adoption is growing across countries such as China, Indonesia and Brazil and this is related to increasing internet penetration and popularity of social networking in these countries. Furthermore, as smartphones become more integrated to the lifestyle of people in the form of mobile shopping, e-banking, and bring your own device (BYOD), the demand for smartphones is accelerating across the globe, which in turn is fueling the growth of the mobile protective case market.

Presently, there is a lack of standardization in technology and components used in the manufacturing of mobile phone accessories. The lack of definite standards in the market lead to high product and price differentiation, and this may hinder the growth of the mobile protective case market to a certain extent.

The China market was estimated to account for more than 50% share of the Asia Pacific mobile protective case market by 2016 end. It is expected to be a highly attractive market in terms of CAGR and revenue share during the forecast period. The market in China is anticipated to create a substantial incremental opportunity during the forecast period and is estimated to account for almost 54% market share by the end of 2026, exhibiting an attractiveness index of 3.1. In terms of revenue, the Indonesia market is projected to expand 1.5X and account for close to 3% share by 2026 end. The Indonesia market is likely to exhibit a low market attractiveness index as compared to other country markets. 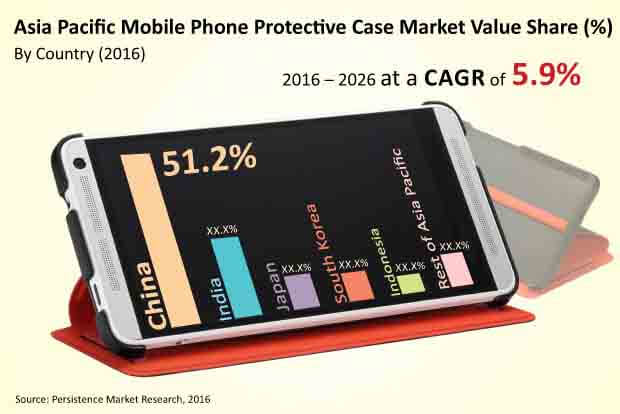 In 2014, Apple Inc. acquired Beats Music and Beats Electronics – a subscription streaming music service provider – for a combined value of US$ 3 Bn. The objective of this acquisition was to expand Apple’s product portfolio related to mobile accessories and subscription-based music services. In 2014, Brightstar Corp. completed acquisition of the commerce and service division of SoftBank BB Corp. – a Tokyo-based distributor of mobile accessories – in order to expand its footprint in the region.”

This research report provides detailed analysis of the Asia Pacific mobile protective case market and offers insights on the various factors driving the popularity of these products and devices. The market study provides comprehensive assessment of key stakeholder strategies and imperatives for succeeding in the business. The report begins with an overview of the Asia Pacific mobile protective case market. In addition, this section includes an analysis of key trends, drivers and restraints from the supply, demand and economy side, which are influencing the Asia Pacific mobile protective case market. Impact analysis of key growth drivers and restraints based on the weighted average model is included to facilitate clients with crystal clear decision-making insights.

As previously highlighted, the Asia Pacific mobile protective case market is split into a number of segments. All segments in terms of price range, distribution channel and based on different countries are further analyzed in terms of basis point share to understand individual segments’ relative contribution to market growth. This detailed level of information is important for identification of various key trends in the Asia Pacific mobile protective case market. Also, another key feature of this report is the analysis of all key segments in terms of absolute dollar opportunity. This is traditionally overlooked while forecasting the market. However, absolute dollar opportunity analysis is critical in assessing the level of opportunity that a provider can look to achieve, as well as to identify potential resources from a sales and delivery perspective in the Asia Pacific mobile protective case market.