Rising demand for enhanced security and safety features in connected cars is expected to increase the adoption of automotive cyber security solutions over the coming years. Global sales of electronic vehicle (EVs) have grown more than 2 million units globally in 2018, which is expected to increase further over the coming years. Constant rise in EV production across the world will leading to surging demand for automotive cyber security solutions across geographies, with use in infotainment systems leading the way.

Over the past few years, the automotive industry has become more advanced, and the amount of information autonomous vehicles generate, analyze, and process is much higher, and will continue to grow over the coming years. Alongside this growth, evolving cyber-risks are a significant problem, and to deal with highly sophisticated attacks, automotive companies and cyber security tech players are continuously collaborating with each other to develop advanced automotive cyber security solutions to ensure the highest level of security in connected vehicles.

Owing to rise in cyber-attacks in the automotive sector, automotive cyber security solution demand is likely to increase rapidly over the coming years.

How Will Adoption of ADAS Technology Impact Demand for Automotive Cyber Security?

Automated Driver Assistance System (ADAS) technology is the next big transformation that the global automotive industry is going to see, apart from electric mobility. ADAS is a technology that enables vehicles to be automated, safer, and enhanced with safe driving. Sensors, processors, actuators, mapping systems, and various software systems come together to make this possible. One of the reasons for increasing demand for ADAS is rising interest in road and traffic safety, both, at the level of governments and individuals.

However, ADAS exposes a large attack surface, and cybersecurity weaknesses could have devastating consequences. It is paramount that, in this technological sector, as in all others, security is a priority. Automotive cybersecurity is not only a key requirement but a crucial pre-requisite for safe ADAS and future self-driving cars. There will be no safety without cybersecurity. Thus, several OEMs are collaborating with cybersecurity companies to develop advanced ADAS vehicles to ensure the highest level of safety and security.

What are the Technological Development by OEMs?

Connectivity is emerging as a key competitive differentiator in today’s automotive market. The automotive industry is moving toward connected vehicle technologies such as V2I (vehicle-to infrastructure), V2V (vehicle-to-vehicle), V2P (vehicle-to-pedestrian), and V2D (vehicle-to-device). To implement these next-generation technologies in vehicles, automotive OEMs, telecom service providers, and IT service providers are coming together. Moreover, it has been observed that, many automotive brands are adopting more collaborative ways of working toward innovations in connected car technology. These advancements in the automotive industry are projected to fuel demand for automotive cyber security solutions across the globe.

Connected vehicles have created a new ecosystem within the automotive industry. Although adding connectivity to vehicles has its benefits, it also has its set of challenges. By adding connectivity, there can be issues with security, privacy, and data analytics and aggregation due to the large volumes of information being accessed and shared. Cyber-attacks and data breach incidents will pose severe risks to the automotive industry, as they directly impact driver safety, data privacy, and service continuity. Hence, proper guidelines and regulatory mandates will be critical to ensuring the safety and security of automotive customers in the near- to long-term future. Unfortunately, there has been lack of clear and enforceable standards in the automobile industry.

However, over the past few years, several agencies such as the National Highway Traffic Safety Administration, European Union Agency for Network and Information Security, and European Automobile and Manufacturer’s Association have introduced various regulations related to automotive cybersecurity, including ISO/SAE 21434 and WP.29 regulations. There are many cybersecurity players present in the market to help OEMs secure their vehicles at the design/development phase. OEMs are also continuously adopting advanced cyber security solutions to become compliant with all automotive security regulations.

What Factors are Adversely Affecting Demand for Automotive Cyber Security?

One of the major factors hampering growth and adoption of automotive cyber security is the lack of experienced & skilled cybersecurity professionals.

Vehicle manufacturers are not making enough investments in cybersecurity training, partly because they believe trained professionals will leave for better job prospects. The ability to prevent cyber-attacks depends on the availability of a highly skilled cybersecurity workforce; therefore, it is highly essential to include cybersecurity in all education systems to meet emerging demands in the automotive sector.

According to Proofpoint, around 146 million connected vehicles are projected to take to the roads by 2030, making automotive security more important than ever. Also, as connected vehicles are continuously evolving and becoming more technologically advanced—requiring hundreds of millions of lines of software code to operate and power advanced features—the number of potential cyber security threats will grow as well.

Overall automotive cyber security is derived into three areas that include authentication and access control; protection from external attacks; and detection & incident response. Thus, to ensure security across all these areas, having a multi-layer security approach is becoming more important. This approach includes secure internal and external communications, use of embedded intrusion detection and prevention systems, facilitate authentication, secure system updates, and secure operating systems. This multi-layered security strategy allows car manufacturers to identify weak links and block any attack, thus providing a safe and reliable driving experience for consumers. 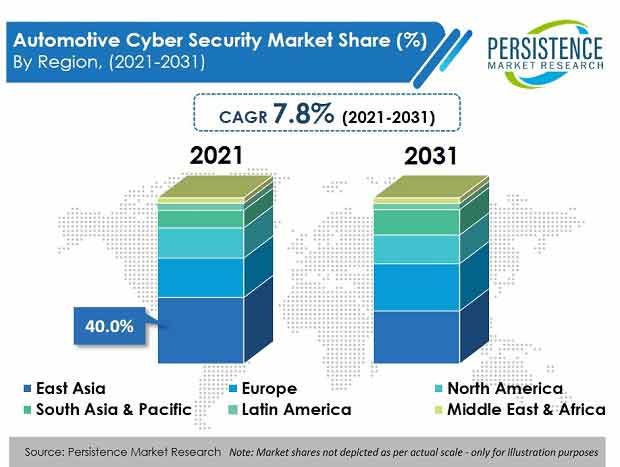 What Makes the U.S. a Huge Market for Automotive Cyber Security Solutions?

Until 2020, automotive cyber security value across the United States experienced a Y-o-Y growth of 9.6% to cross US$ 1.5 Bn. The market is set to further debase at a CAGR of 6.7% through 2031. Persistence Market Research has projected the U.S. to remain one of the most lucrative markets in North America throughout the course of the forecast period, as the U.S. has one of the largest automotive markets in the world.

Historically, the U.S. automotive industry has contributed 3 – 3.5 percent its overall GDP. The industry directly employs over 1.7 million people engaged in designing, engineering, manufacturing, and supplying parts and components to assemble, sell, and service new motor vehicles. Thus, higher production of automobiles in the country is expected to increase the adoption of cyber security solutions.

What are the Automotive Production and Cyber Security Trends in the U.K.?

The UK automotive sector has enjoyed unprecedented success in the recent years. The industry puts significant emphasis on digitalization. There is a diverse range of vehicle manufacturers in the U.K. including– Nissan, Toyota, Honda, BMW, and Vauxhall, along with local premium manufacturers such as Jaguar, Land Rover, Aston Martin, Bentley, McLaren, and Rolls Royce, amongst others.

Digitalization has been adopted by several automotive companies in the U.K. to enhance competitiveness through productivity gains and enhanced customer service. Moreover, stringent U.K. government regulations for data privacy have made all manufacturers in the country offering connected cars put greater emphasis on ensuring that the systems used in their vehicles are secure and well-updated with the latest standards. Thus, several car manufactures are focusing on the adoption of several cyber security technologies, which would drive the automotive cyber security market in the country, which is estimated to reach a valuation of over 330 Mn by the end of 2031, registering a CAGR of around 8%.

China is estimated to record an incremental opportunity worth more than US$ 920 Mn over the forecast period, as the country has been the world’s largest automotive manufacturing country and automotive market since 2009. China’s automotive industry has been growing rapidly, and the country is playing an important role in the global automotive market. According to the Ministry of Industry and Information Technology (MIIT), China’s countrywide automotive sales have broken through the benchmark of 28 million in 2016, globally ranking first for eight consecutive years.

China’s automobile market has attracted many well-established foreign brands to invest in their automobile production in China. However, most foreign brands are only allowed to produce their vehicles in China by establishing joint ventures with domestic automobile manufacturers.

Thus, continues rise in automobile production in China has created huge opportunity for cyber tech players to enter into China’s automotive market. China’s government is continuously focusing on developing new regulations in the automotive security sector, which would drive demand for automotive cyber security systems in the country.

The automotive sector in India is considered as the backbone of the Indian manufacturing industry, contributing 7.5% of the GDP. Deloitte’s Global Automotive Customer Research for 2020 shows that, two out of three Indians are likely to be willing to pay up to INR 50,000 (close to US$ 700) for connected technologies.

Growing importance of seamless online and offline vehicle experience brings a huge opportunity for connected vehicles to grow in India. Thus, with increasing number of connected vehicles in the country, demand for automotive cyber security solutions is also expected to increase over the coming years.

What is the Share for Infotainment Systems in Automotive Cyber Security?

By application, infotainment systems held the largest market share of 35.4% in 2020, owing to growing advancements in these systems. Use of smartphones and aggrandized use of cloud technology is significantly boosting the growth of the global in-car infotainment market. It has improved system response times, when interacting with infotainment systems.

The automotive cyber security market is highly concentrated in nature, and this can be attributed to the majority share held by local and emerging automotive cyber security solution and service providers. Companies that hold a market share of 5% to 10% are tier-1 companies, and this group includes players such as Continental, STMicroelectronics, Vector Informatik GmbH, Infineon Technologies, and Trend Micro.

Companies with a market share of above 3% and below 5% are promising players. These companies are likely to showcase a quick growth trend and harness the opportunities that the global market has to offer to accommodate business expansion and revenue generation. This group includes Synopsys, Upstream Security, Aptiv, and ESCRYPT.

Companies that have a relatively lower size with a market share worth less than 3% are strategizing to attract new clientele in foreign markets. Companies in this group are Guardknox Cyber Technologies Ltd, Karamba Security, and Sectigo Limited, among others.

These aforementioned players rely on multiple expansion strategies to deepen penetration across lucrative markets. These strategies include product launches, collaborations with key players, partnerships, acquisitions, and strengthening of regional and global distribution networks.

Persistence Market Research projects the global market to register a CAGR close to 8% across the 2021-2031 assessment period. Advent of connected and autonomous vehicles is expected to drive growth in a positive direction.

Yes, the report has been compiled by expert analysts of Persistence Market Research, through a combination of primary and secondary research. To know more about how the research was conducted, you can speak to a research analyst.

Persistence Market Research follows a methodology that encompasses the demand-side assessment of the market, and triangulates the same through a supply-side analysis. This methodology is based on the use of standard market structure, methods, and definitions.

The marketing attribution software market is likely to strengthen its hold in the global market at a promising CAGR of 13% between 2022 and 2032..

Global DIY home security solutions market is expected to foresee an outstanding CAGR of 22.4% & revenue over the course of the assessment period 2017-2025.

Market segmentation of the air cargo security screening systems market has been offered on the basis of size of screening system, technology, application & regional outlook.