Increasing prescriptions of semi-synthetic opioids for de-addiction programs is also likely to create a positive impact on the semi-synthetic opioids segment. Methadone and Buprenorphine are widely prescribed drugs in opioid de-addiction programs. Due to the over prescription and abuse of opioid drugs these days, the demand for de-addiction opiates has increased. In 2015, more than 20 million Americans suffered from substance use disorder, which included 2 million people suffering from the abuse of Suboxone, one of the blockbuster drugs containing buprenorphine.

The introduction of novel opioids, especially in Abuse Deterrent Formulation would enhance the growth of the North America synthetic opioids market. New products with innovative formulations and drug designs such as abuse-deterrent formulations in Oxycontin and Opana are likely to fuel the branded opiates market. Moreover, the U.S. Food and Drug Administration is encouraging drug makers to come up with new generation drugs that make them less attractive to addicts. Increase in new drug applications by pharmaceutical companies and the number of products in their pipeline is a key growth driver for the semi-synthetic opioids segment of the North America synthetic opioids market. 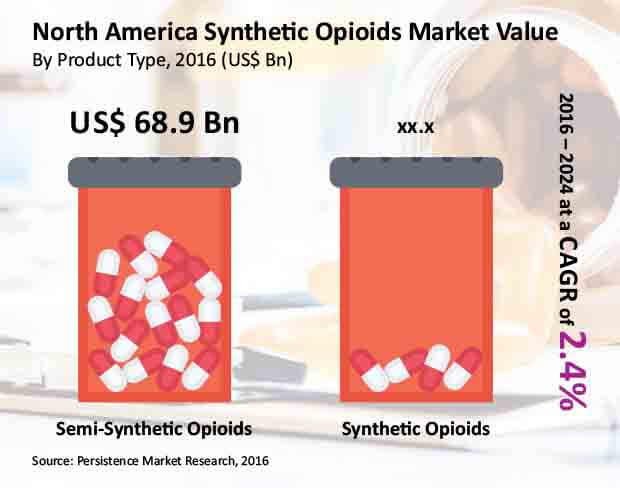 The Canada semi-synthetic opioids market is anticipated to depict a relatively high growth rate as compared to the U.S market over the forecast period

Manufacturers of opioids have witnessed tremendous growth in consumption in the last decade. This stupendous growth can be attributed to the absence of regulatory policies and lack of product knowledge among physicians. However, the scenario has changed and now, companies are facing challenges from reformed regulations. Hence, in order to sustain in such a regulatory environment, companies are now focusing on the development of more advanced forms of opioids that strictly adhere to the prescription and manufacturing regulations. In a new report on the North America synthetic opioids market titled “North America Synthetic Opioids Market: Global Industry Analysis and Forecast 2016-2024,” the analysts of Persistence Market Research have observed that pharmaceutical companies are highly focused on the development of tamper evident opioid drugs, owing to the high misuse of opioids. Companies are taking measures to develop non-abuse drug formulations to prohibit the misuse of opioids. For example, in July 2014, the U.S. Food and Drug Administration approved the newer form of OxyContin, a type of non-abuse opioid drug. The report further states that the U.S market holds the maximum share of opioid sales. After phenomenal growth in opioid sales, the market has become stagnant over the past few years, due to several regulations and restrictions on prescription drugs.

The analysts have considered the weighted average pricing of different opioids in North America while inspecting this market. Generic products have been taken into account, as an increase in generic products has led to a decrease in the average pricing of the drugs. Patented formulations such as tamper-resistant drugs or controlled release drugs are differentiated products and thus charge a high price; hence, they affect the average selling price of the product. Various government agencies regulate the selling prices of drugs and thus affect the price of many branded products. A demand-supply gap analysis has been carried out involving both marketplace discussion and desk research to determine the price. Indicators such as R&D expenditure, research funding from government and non-profit organizations etc. have been considered to arrive at the indicated market numbers. The analysts have not factored yearly change in inflation rate while forecasting market numbers. All values for market size are in US$ (US Dollar).