Global Market Study on Opioids: Market Proliferating on Back of Rising Demand for Pain Management Medication

The global opioids market is expected to expand at a moderate CAGR of over 3% over the next ten years, and be valued at more than US$ 57 Bn by 2031-end. As per product, demand for morphine and methadone will remain the highest though the course of the forecast period.

Opioids are potent pain-reducing medicines that include morphine, codeine, oxycodone, hydrocodone, and methadone, among others, and have both benefits as well as potentially severe risks of addiction. Prevalence of chronic diseases is constantly on the rise, globally. This is creating major health burden on most economies. According to a research published in the International Journal of Immunopathology and Pharmacology 2019, prevalence of neuropathic pain among the general population was estimated to be between 3% - 17% globally. Opioid therapy is the mainstay for orthopedic treatment of patients with moderate to severe pain.

Opioids prescribed as pain relievers are usually safer if consumed for a short period of time. Long-term use—even if prescribed by a physician—can lead to dependency and addiction, overdose incidents, and even morbidity. Opioids can cause euphoria, which is the main reason they are misused (abusive consumption).

According to the World Health Organization (WHO), around 500,000 deaths are traceable to drug consumption each year, out of which more than 70% are due to the consumption of opioids, while the other 30% are caused due drug overdose.

In its revised study, Persistence Market Research offers insights about key factors driving demand for opioids across the globe. The study points toward the adoption of opioids as the choice for pain management to treat chronic illnesses. This latest report also tracks global sales of various opioid products such as morphine, codeine, fentanyl, meperidine, and methadone, in more than 20 high-growth markets. This edition (2021-2031) brings readers up-to-date with key market developments, providing analysis on how manufacturers and other stakeholders are reacting to change. The study expands on the previous competitive landscape section, and readers will understand the key strategies of established players as well as new entrants in this market place.

What is the Future Demand Scenario for Opioids?

According to NIH, opioids are frequently used to treat adults suffering from moderate to severe pain, though some of the prescribed opioids can be used to treat cough and diarrhea as well. Demand for opioids has been rising since the past few years, applicable for pain management medications. Rising awareness for palliative care and favorable reimbursement policies, along with adoption of Opioids Maintenance Treatment (OMT), have increased demand opioids across regions.

Based on research studies and ongoing trials, effective medication for pain management has exhibited the ability to support patients in achieving their clinical goals. Such factors are expected to create opportunities for the expansion of the opioids market size over the forecast period, which is projected to expand at a CAGR of more than 3% over 2021-2031.

Given the consolidation in the market, key players are focusing on mergers and acquisitions to explore lucrative opportunities in the market. Leading manufacturers are also focusing on improving their commercializing efforts following regulatory guidelines. These trends are being actively followed throughout North America, Latin America, Europe, Asia Pacific, and the Middle East & Africa.

For instance, in August 2020, RedHill closed off its new agreement with Daiichi Sankyo by replacing its co-commercialization agreement for Movantik® (which was acquired by RedHill in 2019) with a new royalty-bearing agreement. This agreement will place the exclusive responsibility on RedHill to maintain the commercialization of Movantik® in the U.S.

What are the Expected Opportunities for Opioid Demand?

Opportunities for opioids will arise by extended offerings to users in terms of effectiveness and convenience, along with regulatory support. Additionally, along with opioids, companies are also increasing awareness regarding palliative care services. Developing commercial & potential formulations with high efficacy and potency versions are expected to provide potential opportunities for leading companies offering opioids. For instance, in September 2020, Fujian Cancer Hospital continued its Phase III clinical trial study of the fentanyl patch to assess the safety and efficacy in opioid-naive patients suffering from moderate cancer pain.

Moreover, opioids, being used widely as a pain reliever by the common population, is expected to cause opioid-resistance. Thus, the introduction of non-abusive opioids to avoid the resistance of opioids is expected to offer lucrative opportunities for manufacturers over the coming years.

What are the Driving Factors for Opioid Manufacturers?

Rise in the number of patients suffering from terminally chronic diseases such as severe cough resulting from a lung infection, HIV, and cancer, and high surge in the prescription of pain medications after post-operative surgeries are factors expected to boost consumption of opioids as a pain medicine. 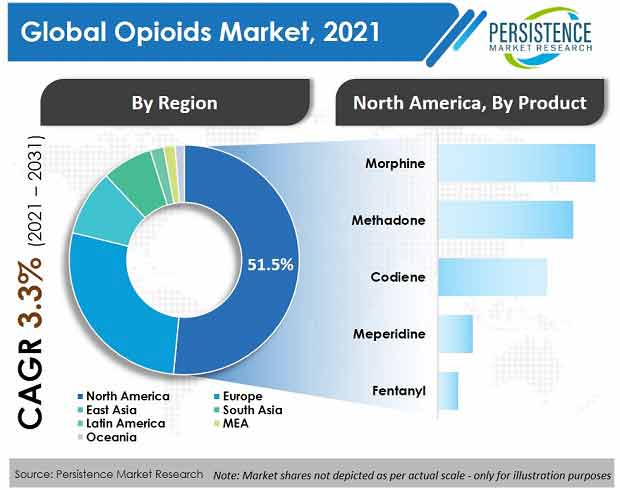 What Makes the U.S. the Largest Market for Opioids?

Demand for opioids is rising in the U.S. due to increasing prevalence ate of chronic diseases and high consumption of opioids as a pain reliever as well as for abusive use. The U.S. is majorly focused on branded opioid manufacturers interested in launching novel products to maintain compliance with updated regulatory guidelines. Moreover, governmental support for ongoing clinical research has allowed the U.S. to dominate the pain management landscape.

Presence of some prominent players such as Pfizer Inc., Janssen Pharmaceuticals, Inc., Purdue Pharmaceuticals L.P., Assertio Therapeutics, Inc., and other North American companies has created remarkable returns for the country. Through the successive development of novel formulations and abuse deterrence studies Purdue was the first company to introduce opioids with abuse-deterrent formulations properties.

Why is Demand for Opioids Flourishing in the U.K.?

The U.K. healthcare system is a universal and well-renowned system, largely funded by the government. It is one of the most successful healthcare systems in the world. It is not surprising that the U.K. has the highest level of spending in Europe. According to our analysis, the U.K. is identified as the third-leading market, and the position is likely to hold through the forecast period.  Furthermore, rising research efforts, increasing pipeline drugs, and presence of several major players creates a huge opportunity for opioids in the country. The U.K. market is expected to reach a valuation of US$ 2.6 Bn by the end of 2031.

Why is Innovation Key to Succeed in the German Pharmaceutical Market?

Favorable reimbursement policies by German regulatory authorities regarding awareness for palliative care, adoption of non-abusive opioids, and adoption of opioids maintenance treatment (OMT) to treat opioids dependence (OD) have increased opportunities in the opioids space. Additionally, Germany has introduced a law permitting doctors and physicians to prescribe digital application channels with health benefits, which can be reimbursed by the country’s health insurance system.

What Factors Make China a Lucrative Market for Opioids?

China is the second-largest pharmaceutical market and is rapidly growing based on the two main factors - large-scale capital investment and rapid productivity growth. These two factors project an appealing destination for foreign investments as well large domestic savings. Since the 1970s, the country has been transforming from being a low economic to a more market-oriented country. China is holding the fourth position in the global market due to adoption of high amounts of opioids and its large-scale manufacturing capacity. The market in China accounted for around US$ 2 Bn revenue in 2021, and is expected to expand at a CAGR of 3% through 2031.

How Will Increasing Focus on Research Surge Demand for Opioids in India?

In recent years, large and small pharmaceutical companies have heavily invested in research areas and R&D operations. Opioid demand is likely to grow, as most products in the pipeline are about to reach the end stage, and would be available by the end of the decade. It is easier to recruit patients for clinical trials in developing countries. Research and clinical trials have become a major business in India due to factors such as presence of government-funded pharmaceutical and medical institutions with advanced facilities, which serves as ideal centers for clinical trials. In India, cost of R&D is substantially less as compared to that in developed countries.

According to the report, India generated the highest revenue share among the countries in South Asia, and is set to lead the South Asian opioids market over the coming years.

Why is Demand for Morphine Continuously Rising?

Based on opioid products, morphine is leading the market and is expected to gain more than 35% of the revenue share over the forecast period. Morphine opioids would be key areas of investment for generic manufacturers, owing to high consumption of these drugs and their convenient availability. Due to commercialization of cost-effective generics of morphine opioids across Asian countries, the segment is expected to retain its high market share over the forecast period.

The opioids market is greatly consolidated in nature, with the presence of leading players operating in this space. They are focusing on research & development activities majorly for pain management and also for other therapeutic applications such as cough suppression and diarrhea suppression in various clinical and research fields. With this, market players are also engaged in expanding their global and regional presence through acquisitions, expansions, product launches, and improvement of distribution channels.

Opioids manufacturers with patented drugs are successfully allocating their distribution rights to local companies that are operational in the pain management business. This strategy provides momentum to the growth of these companies’ business, owing to strong demand for generic drugs.

Q1. What are the emerging trends that expect to offer lucrative opportunities for opioid manufacturers?

Many companies are focusing on the development of non-abuse opioid drugs. Delegation of reformed prescription guidelines for opioids is promoting their appropriate use across the globe. Numerous healthcare authorities are deploying newer prescription regulations for pain management.

Q2. Which opioid holds a significant share in the market?

Morphine holds the highest market share. It is used to relieve moderate to severe pain, usually after surgery or traumatic injury. Morphine is the most abundant and potent opioid, which has made it a popular pain reliever since its discovery.

Q3. Which application is expects to dominate the opioids market?

Analgesia accounted for the highest share in the market. Increasing surgical pain, injury or trauma, cancer pain, and pain arising from diseases and anesthesia have been considered under the analgesics category during the study.

Q4. Which are the leading companies in the opioids landscape?

Challenges associated with the availability of opioids in developing countries, increasing adverse effects, lack of treatment regimen, compliance, and high level of abusive consumption are some of the restraining factors that expected to hamper market expansion.

Persistence Market Research follows a methodology that encompasses demand-side assessment of the market and triangulates the same through supply-side analysis. This methodology is based on the use of standard market structure, methods, and definitions. Request a detailed methodology.