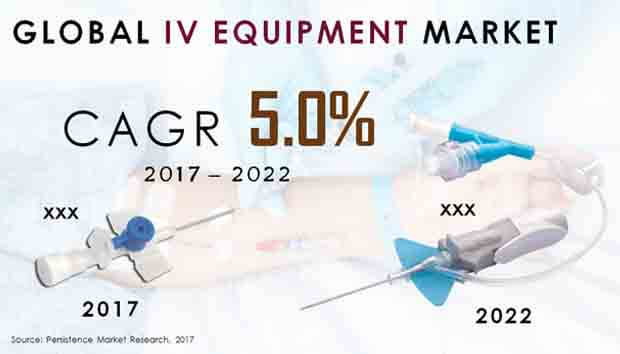 The IV catheter segment accounted for a revenue share approaching one-third of the IV equipment market by product type in 2017 and may gain market share going forward. The IV catheter segment is poised to be worth just under US$ 3.5 billion at the end of the forecast period in 2022, making it large enough for all stakeholders in the IV equipment market. Infusion pumps follow IV catheters in the IV equipment market and have a revenue share of approx. a sixth in terms of product type segment. Europe is the largest region in the infusion pumps market as the continent has a well-developed medical infrastructure coupled with a geriatric population that would naturally demand such treatment.

A similar potential exists in the securement devices segment and the stopcocks & valve segments of the IV equipment market as they both have minimal revenue share in 2017. However, the securement devices segment is estimated to lose market share over the course of the forecast period while the stopcocks & valve segment is assessed to gain share. An absolute dollar opportunity of more than US$ 270 million exists in the stopcocks & valve segment of the IV equipment market from the year 2017 to 2022. Along with Europe, companies are advised to target APEJ as the region could record the highest CAGR for the five-year study period. As the region becomes more affluent, consumers there might demand better healthcare services and IV equipment should ready to take advantage of this.

Rising incidence of chronic diseases, a rapidly ageing population in developed nations, and a growing number of surgical procedures are all responsible for the growth of the IV equipment market. In addition to this, there is an urgent need of ambulatory infusion pumps on account of the shift in preference towards home care. Persistence Market Research has conducted an in-depth assessment of the IV equipment market in its upcoming report titled ‘IV Equipment Market: Global Industry Analysis (2012-2016) & Forecast (2017-2022)’. A historical evaluation for the four-year period ending in 2016 has been presented in tandem with the forecast period from 2017 to 2022 to give readers a complete picture of the present and future prospects in the IV equipment market.

The IV equipment market report has given an adequate amount of attention to both developing as well as developed countries. The emerging economies to look out for include Latin America, MEA, and APEJ while the developed regions comprise Europe, North America, and Japan. Each region has a section wherein revenue statistics have been highlighted. The forecast allows readers to gain an in-depth understanding of the IV equipment market. Special attention has been given to the largest countries within each region making it relatively easy for companies that want to enter certain geographies with the maximum potential in the IV equipment market.