Cloud gaming provides certain benefits and access to video games irrespective of the user’s device features, and no downloading or storage is required. This concept also allows certain video game vendors to shift from the physical distribution of video game copies to a software platform for downloading and playing completely.

Cloud gaming vendors offer users a video game library. For certain games, there will be a requirement for a game controller, irrespective of the device being used.

The advantages of cloud gaming are that users do not have to worry about download time, updating time, and the limitations of their devices. As a result, the global market for cloud gaming expanded at the rate of 33.7% from 2017 to 2021.

Cloud gaming also consolidates the trend where companies are slowly shifting from the physical distribution to the digital distribution of games, and if the market grows positively, there may even come a time in the future when there will be cloud-exclusive video games.

Persistence Market Research identifies that the demand for cloud gaming will skyrocket at a CAGR of 41.7% from 2022 to 2032. 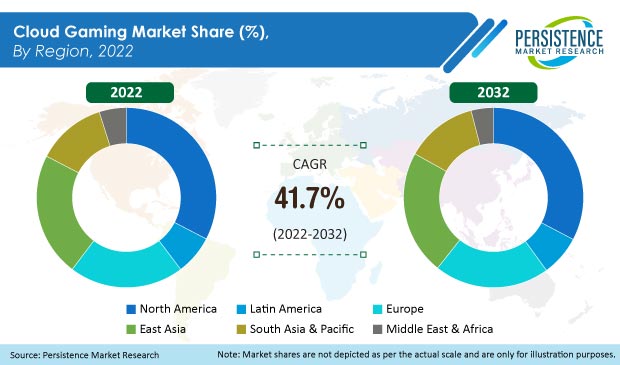 Why is the Cloud Gaming Space Witnessing Higher Demand from Causal Gamers?

Casual gamers are those that engage in video gaming for recreation, having fun with their friends, or simply killing time and entertaining themselves. With the availability of smartphones, laptops, and smart TVs, people who fall within this category now have wider accessibility to video games.

However, unlike competitive gamers or professional gamers, casual gamers are not likely to invest in gaming-specific hardware, such as gaming laptops that are far more expensive than non-gaming laptops.

As the quality of video games is improving, so are the hardware requirements for memory and technology. Cloud gaming bypasses this requirement, allowing casual gamers to enjoy the video games of their choice without any limitations.

The East Asian cloud gaming market is estimated to expand 35.3X during the forecast period of 2022 to 2032.

East Asia, which includes China, Japan, and South Korea, has a large video game industry. Japan is regarded as one of the key countries when it comes to video game development. This region also has a wider culture of competitive and professional gaming.

Why Does the U.S. Lead in the Adoption of Cloud Gaming?

The United States is a country where video games are enjoyed by people of a much wider age group and also have wider access to gaming consoles, head-mounted displays, PCs, and laptops.

Several large video game manufacturers and cloud gaming solution & service providers are present in the country. The cloud gaming market is new and therefore the cloud gaming operations of several companies such as Nvidia haven’t penetrated regions outside North America and Europe as yet.

The presence of several data centers and servers as well as high-speed Internet makes it much easier for people in this country to access cloud gaming. As such, USA is expected to reach a market valuation of US$ 12.36 Bn by 2032.

Will South Korea Have a Promising Future in Cloud Gaming?

Video game companies in the country are taking steps to introduce more cloud gaming services, and some companies have already started providing services after finding out ways to reduce latency rates. For these reasons, the South Korean cloud gaming market is estimated to surge ahead at a CAGR of 33.9% through 2032.

What is the Outlook for Cloud Gaming Companies in India?

The market for cloud gaming in India is estimated to expand rapidly at a CAGR of 36.2% during the forecast period, according to this report.

In India, the type of device that has been most widely accepted by people for gaming is the smartphone. Accessibility is key in this country, and cloud gaming carries accessibility as its principal quality.

However, the lack of sufficient data centers in India is a massive restraint since it slows down the streaming speed of video games. If data centers become more widely available and smartphone users’ experiences improve, India has a bright future in the cloud gaming space.

The acceptance level of gaming-as-a-service (GaaS) by professional gamers is the true test of the cloud gaming market and how much it can grow.

FPS (Frames per Second) latency and lags matter much more to professional and competitive gamers compared to casual gamers, and lags can influence the chances of victory and even the quality of the videos that they post on video streaming platforms.

These gamers are more affected by lags, downtimes, and pixelated graphics as compared to casual gamers. However, based on certain reviews and feedback given by those who have used cloud gaming services, the lags are not that bad, and with time and development, video games on the cloud can match the same level of experience as that of on-device gaming.

Professional and competitive gamers are usually engaged in video games that are FPS (First-Person Shooters) and MOBA games. This requirement needs to be identified by cloud gaming vendors and acted on accordingly.

Can the Huge Smartphone User Base Help Drive Demand for Cloud Gaming?

The market share of smartphones in the cloud gaming market is expected to bloat at a CAGR of 37.2 % during the forecast period.

The feature that separates smartphones from other devices is that they are more accessible to people and most widely used. One may not have any other device but is likely to at least have a smartphone.

This device can be easily carried around as we know it, and in countries where other devices are not widely used for gaming, smartphones are used. Certain games are designed specifically for smartphones, which also expands the market for cloud gaming on smartphones.

How much revenue did the cloud gaming market generate in 2021?

At what rate is demand for cloud gaming predicted to rise?

Which regional market is expected to showcase high growth?

The South Asia & Pacific market is estimated to grow rapidly at a CAGR of 37.2%.

Which is the leading market for cloud gaming?

North America leads the global cloud gaming market with a share of 32.6%.

What are the main factors driving the cloud gaming industry?

Users not having to worry about download time, storage space, and limitations of their device features are the key reasons for market surge.

Which is the leading device used for cloud gaming?

What was the last 4-year cloud gaming market CAGR?

What is the stand of East Asia in the cloud gaming market?

The cloud gaming market in East Asia is expected to account for a market share of 19.1% by 2032.

Which countries account for this highest usage of cloud gaming solutions?