Global air intake system market revenue totaled US$ 12.2 Bn in 2021. Demand for air intake systems is set to accelerate with the top 5 providers holding 47% market share. As such, the worldwide air intake system industry is predicted to reach a market valuation of US$ 17.76 Bn by 2032, expanding at a CAGR of 3.6% over the same period of time.

The East Asia air intake system market is growing due to rising government emission standards, increased vehicle production, and growth in the automotive sector, especially in China. As a result, East Asia is projected to hold 27% share in the global market for air intake systems.

From 2017 to 2021, the market for air intake systems expanded at 0.2% CAGR, and is anticipated to increase 2.4% in 2022. This significant increase in Y-o-Y growth in 2022 is due to increasing production and consumption of automobiles. Demand for cars soared after restrictions of the pandemic eased, as customers had returned to dealership floors as soon as pandemic-related restrictions had been relaxed around the globe.

The aftermarket has benefited from increased maintenance activities to reduce emissions. According to data from the United States Energy Information Administration, the United States and Canada are rated second and seventh in the world in terms of CO2 emissions, respectively.

In 2009, the European Commission established required emission reduction targets for new car manufacturing to lower the automotive sector's average carbon footprint by 35% by 2030. This is expected to boost air intake system demand in the aftermarket.

Consumption of air intake systems in the global market is anticipated to grow 1.3X from 2022 to 2032. 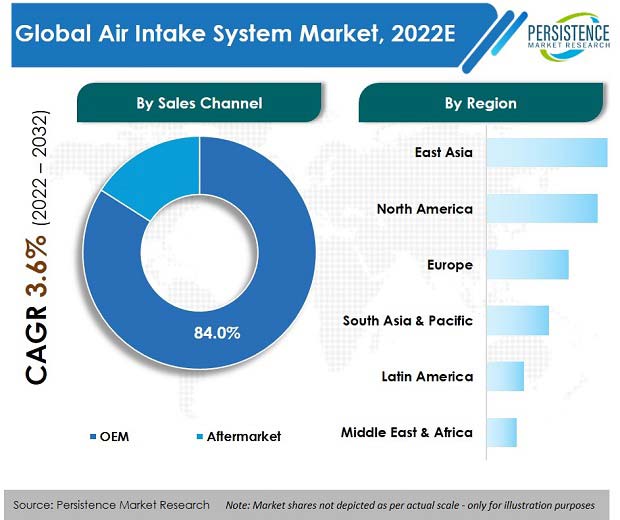 How Can Air Intake System Manufacturers Gain Traction in the Market?

Market participants can retain product differentiation and strengthen their roots in the global automotive air intake system market by launching sophisticated products that are unique to vehicle models, which offers various operational benefits while also complying with existing laws.

Temperature and combustion pressure rise as a result of engine downsizing is putting greater demand on automotive air filter systems. Advanced materials based on powder metallurgy are being incorporated in system parts to prevent the wear and tear of vehicle air intake systems, creating a significant opportunity for manufacturers seeking to drive sales and increase their market share.

What Hurdles Do Air Intake System Suppliers Need to Overcome?

Growing preference for electric vehicles will hamper demand growth of air intake systems. Environmental issues are a huge concern for people all around the world. The movement toward the use of electric vehicles over traditional fuel-based vehicles has been noticed to reduce pollution.

Governments across the world are offering incentives and subsidies to encourage the use of electric vehicles. The global automotive air filter system market is projected to be hampered by the rise in demand for electric vehicles as these don’t require air intake for the mixture of air and fuel for propulsion.

Where Does the U.S. Stand in the Aftermarket for Air Intake Systems?

The United States air intake system market is estimated to expand at 3% CAGR during the forecast period of 2022-2032. Majority of demand in the United States comes from light commercial vehicles, especially pick-up trucks.

According to OICA, in 2021, the United States produced 7.3 million light commercial vehicles, up from 6.7 million the previous year, representing a 10% increase year-over-year. In that year, new cars produced in the United States accounted for more than 39% of global light truck production, which bodes well for air intake system suppliers in the country.

What is the Outlook for Air Intake System Manufacturers in China?

China is anticipated to hold more than 70% of the East Asia air intake system market share. The market in China has a bright future, with prospects in passenger cars, light commercial vehicles, and heavy trucks.

Rebound in vehicle production and usage, greater kilometers driven per vehicle, strict government and environmental laws, and increased demand from vehicle owners for preventive maintenance are major drivers of the growth for this market.

Development of multi-filtration systems and innovation of engine air systems in commercial vehicles are two emerging trends that have a direct impact on the dynamics of the market in China.

Why is Germany a Lucrative Market for Air Intake System Providers?

Over the forecast period, the Germany air intake system market is projected to create an incremental opportunity of nearly US$ 300 Mn.

According to Eurostat, over 1,750 billion ton-kilometers of inland cargo transported inside the European Union is transported by road. This ratio can reach 90 percent or higher in several European countries.

Rising preference for small vans and pick-up trucks over heavy-duty trucks and trains for logistics is the underlying cause driving the expansion of the light commercial vehicle market in Europe. As a result, during the forecast period, demand for lightweight vehicle components is expected to increase significantly, which is expected to drive the market for air intake systems.

Which Sales Channel Has the Most Potential for Growth in the Air Intake System Market Space?

The OEM channel is projected to create more than US$ 4 Bn in incremental opportunities by 2032. This is directly associated with increasing demand for automobiles around the world, which has led to their increased production.

Petrol/gasoline engines are projected to account for more than 62% of the global air intake system market by the end of 2032.

Due to fewer sophisticated components, petrol cars are less expensive than diesel cars. Petrol engines are often quieter than diesel engines, and their maintenance costs are also lower. This has led to increased demand for petrol engines in the market, driving the need for related air intake systems.

Which Vehicle Type Drives Most Demand for Air Intake Systems?

“Demand Air Intake Systems Highest for Use in Passenger Cars”

As per analysis, passenger cars are estimated to hold around 50% market share in 2022. Light and heavy commercial vehicles are projected to witness a collective drop of 210 BPS by 2032 owing to lesser demand for air intake systems in these vehicles over the forecast period, as compared to passenger cars.

Since the pandemic, people's preferences have turned toward personal mobility. Those who formerly relied on public transportation have changed to personal transport, which appears to be safer and more convenient.

The COVID-19 pandemic had a substantial impact on the world economy, and as a result, air intake system manufacturers’ businesses and operations were negatively impacted. Air intake system demand saw a considerable drop during this period.

A global recession was precipitated by the persistent collapse in consumer demand, while countries went through various lockdown scenarios, resulting in widespread consumer confidence loss and significant drop in vehicle revenues and profitability.

How much is the global automotive air intake system market worth?

What is the predicted growth rate for the air intake system market from 2022 to 2032?

Which are the most lucrative markets for air intake system suppliers?

Who are the top 5 air intake system manufacturers?

Tier-1 firms such as Aisin Seiki, Hitachi Astemo, Donaldson, Toyota Boshoku, and Mann+Hummel accounted for around 50% of worldwide revenue in 2021.

How is the China air intake system market shaping up?

The market for air intake systems in China is projected to expand at 3.7% CAGR through 2032.

Which vehicle type accounts for most consumption of air intake systems?

Worldwide Automotive drive shaft sales are expected to reach US$ 54 billion by 2032, increasing at a steady CAGR of 4.9% over the next ten years..