According to Persistence Market Research’s industry analysis on the U.S. market for men’s underwear and women’s lingerie, the market is anticipated to progress at a robust CAGR of 6.9% through 2031. This industry survey has projected a market value of US$ 21 Bn in 2021, which is predicted to increase nearly 2X by the end of 2031.

Trends in the innerwear industry are evolving as fashion is changing from its traditional approach of binary nature of just male and female. The fashion industry is now deconstructing the gendered dress code and evolving into something the world has never seen.

Just as Savage x Fenty and Urbody are changing the fashion trends with their unique approach, we are expecting to see some more brands follow suit over the next years. 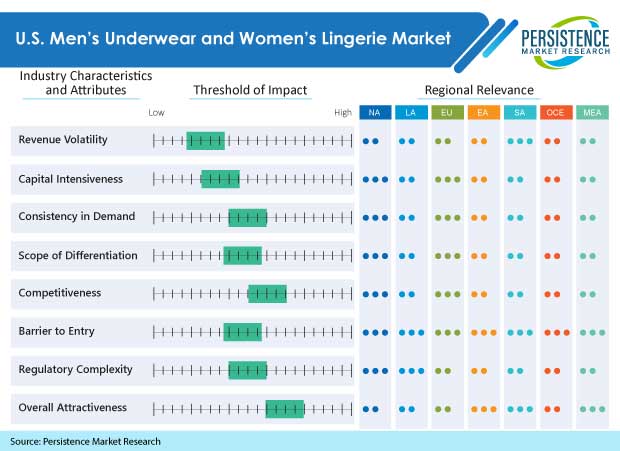 Underwear or intimate apparel is normally worn next to the skin or under other clothing. The five general types of underwear include regular briefs, boxer briefs, boxer shorts, trunks, and thongs. Lingerie is undergarments worn by women, and in some cases by men, and serve to enhance appearance and appeal and are considered highly fashionable. Five types of lingerie include brassiere, panty, sleepwear, shapewear, and daywear.

The U.S. men’s underwear and women’s lingerie market is expected to witness significant growth over the forecast period, owing to rising personal income in U.S. households, propagation of modern retail formats such as supermarkets, discount stores, and pharmacy stores; change in lifestyle, and rising awareness regarding health & fitness and personal hygiene among men and women in the country.

On the other hand, high competition due to a presence of a relatively high number of global and local intimate apparel manufacturers is expected to be the major restraining factor for the growth of U.S. men’s underwear and women’s lingerie market during the forecast period.

Increasing adoption of smartphones and e-Commerce apps is anticipated to drive market growth. Consumers are inclining towards purchasing these products from online stores due to benefits such as online discounts etc. offered by e-Retailers. This is another factor expected to further fuel adoption of this channel while shopping during the forecast period.

The lingerie market in the U.S. is segmented on the basis of product type into brassiere, panty, and others. Brassiere segment revenue contribution is expected to expand at the highest CAGR from 2021 to 2031.