The India tire pressure sensor and airbag sensor market is correlated with the sales of passenger cars and commercial vehicles in the country. Rapidly growing urbanization and increasing electrification in the automotive industry have led to the expansion of smart cities and technologically-advanced systems. This has resulted in increased demand for energy-efficient, high-quality, and high performance solutions to provide comfort and ease to vehicle owners.

Security in vehicles has become increasingly important over the past few years, as consumers are beginning to use advanced products that provide them more comfort and security. In addition, government regulations for passengers’ safety are propelling demand for automated vehicles, which is expected to create significant demand for airbag sensors and tire pressure sensors, worldwide.

Initiatives are being taken by the Indian government to improve road safety, in the form of plans such as the Bharat New Vehicle Safety Assessment Program (BNVSAP). It is an Indian version of the global New Car Assessment Program (NCAP), wherein, cars would receive star ratings based on safety features. This program would include frontal and rear crash tests, and require compulsory safety features such as airbags sensors, tire pressure sensors, and ABS to be incorporated in vehicles, especially passenger vehicles.

Historical Vs Future Outlook for India

Earlier, there was a time when high number of deaths occurred due to accidents related to driver behavior, automobile design, highway engineering, and traffic hazards. An alarming increase in deaths resulting from traffic accidents raised concerns in many sectors of society. Due to this, driver behavior was controlled through laws, fines, signals, and drunk driving arrests, to decrease fatality rates. It took decades to understand, prioritize, and minimize these risk factors.

Earlier, India was ben lagging in terms of automotive safety standards as compared to the U.S. and U.K. But now, the Indian government has been proactively initiating new stringent regulations and upgrading existing ones to reduce road deaths and make them safer for the public. New and advanced safety features that were earlier confined to only luxury vehicles are gradually becoming mandatory for all vehicles. To bring all the safety features in vehicles without increasing overall cost became one of the main concerns of all manufacturers due to mandated regarding safety features required in all models.

Now, manufacturers are engaged in improving technologies in the design of airbag sensors, which results in reducing cushion weight and increasing foldability, thus aiding the development of advanced airbags. Also, in terms of more safety and security, the number of airbags per vehicle has gone up significantly, resulting in many mass market models now equipped with six airbags as a standard. Some automakers are equipping their select model vehicles with even more airbags as part of their strategy to improve occupant safety. Apart from widely used driver-side airbags and passenger-side airbags, some modern vehicles feature knee airbags, side airbags, curtain side airbags, center airbags, rear curtain airbags, and seat cushion airbags. In addition to this, there is advancement in the implementation of TPMS, which includes transmitting live tire pressure data to the cloud with AI predictive analysis of tire lifetime, alerting drivers and fleet managers about potential issues. Such advancements are expected to propel demand for tire pressure sensors and airbag sensors over the coming years.

According to Persistence Market Research’s analysis, India tire pressure sensor and airbag sensor sales are projected to increase at an 8.4% CAGR from 2021 to 2031.

Due to the rapidly growing automotive industry in India, the country provides significant opportunity for market growth. This market growth in India is attributed to increased production of passenger cars and rising public awareness regarding safety and security. Growing demand for luxury automated vehicles in the country is anticipated to drive demand for airbag sensors and tire pressure sensors in the country over the years to come.

The COVID-19 pandemic has triggered significant demand for passenger cars, as people look for safety and comfort transport options. As informed by the Automobile Industry Associations, all major original equipment manufacturers (OEMs) have cut down their production by 18-20 percent due to low demand and decline in sales of vehicles, due to the impact of the COVID-19 pandemic, which has affected the market for tire pressure sensors and airbag sensors in the country.

What is the Regulatory Impact on Sales of Tire Pressure and Airbag Sensors in India?

Governments across the globe are imposing stringent regulations to reduce road accidents. Along with this, manufacturers need to expand their product lines and customize their product as per government regulations, which is driving demand for customized vehicles, in turn, surging demand for airbag sensors and tire pressure sensors. Many initiatives have been taken by the Indian government to improve road safety, such as the Bharat New Vehicle Safety Assessment Program (BNVSAP), which is similar to the global New Car Assessment Program (NCAP), wherein cars receive star ratings based on their safety features. This program includes frontal and rear crash tests and requires compulsory safety features such as airbags sensor, tire pressure sensors, and ABS. Such regulatory norms will complement the sales of tire pressure sensors and airbag sensors over the coming period of time. 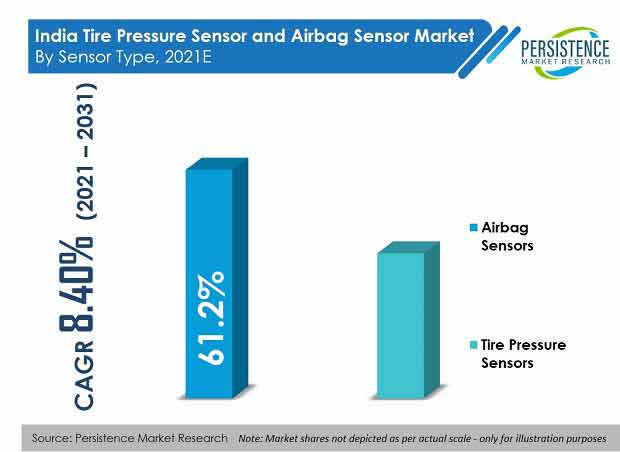 How big is the opportunity for airbag sensors in India?

With growing concerns toward safety and introduction of road safety norms, to reduce the number of road accidents, car manufacturers are mandatorily installing airbag sensors in all new car models. Airbags significantly help in case of major accidents and aid in reducing the degree of injury caused. The Union Road Transport Ministry is being vigilant toward these efforts, and it is trying to curb road accidents via mandating airbag sensors. These factors have created a lucrative opportunity for the airbag sensor market in India.

What is the outlook for airbag sensors in passenger cars?

How are sales of tire pressure sensors expected to shape up in India?

Tire pressure sensors or TPMS create favorable driving conditions by providing real-time data insights to the driver, thus mitigating risks associated with under-inflated tires. In overpopulated countries, especially such as India, where driver safety is extremely crucial, high-speed vehicles and growth in the number of road networks have led to the rising need for tire pressure sensors. These sensors are becoming crucial elements in alerting to tire wear and reducing accidents caused due to tire deflation.

According to Persistence Market Research, trends in the development of airbags look extremely promising, as there are many different possible applications, ranging from aircraft seating to motorcycle helmets. Airbag sensors of the future will be more economical to produce and lighter in weight; will involve smaller, more integrated systems, and will use improved components. With versatility in the functionality of tire-mounted sensors that will detect more than air pressure and temperature, these sensors will be able to detect vehicle load as well as road conditions, creating significant opportunities for market growth.

Advancements in technology and provision of government subsidiaries in some regions are acting as catalysts for the growth of the India tire pressure sensor and airbag sensor market. Advancements and rising safety concerns can lead to increased sales as well as achieving government support. Manufacturers are enhancing their product quality by implementing new and safer technologies at economical rates. The market for tire pressure sensors and airbag sensors is quite consolidated in nature.

Q1. Which sales channels are catering to the supply of tire pressure sensors and airbag sensors in India?

As automotive production in India has been growing over the years, the OEM sales channel remains the most lucrative, with more number of vehicles coming with integrated TPMS systems in India.

Q1. Which are some of the leading companies providing tire pressure and airbag sensors?