Currently, India accounts for 5% to 10% share of the global expansion joints market.

The growing energy sector of India coupled with increasing government policies to expand the industrial sector by building an encouraging environment for foreign direct investment is driving the market for expansion joints in the country.

The oil and gas sector is one of the prominent industries in India influencing the decision-making for all other significant sections of the economy. As India has a high demand for energy, the need for oil and gas is also anticipated to surge over the coming years. This has led to heavy investments in the oil and gas sector in the country. India is considered the third-largest consumer of oil in the world, as of 2021.

The Indian government has adopted several policies to meet this increasing demand. The government has allowed 100% foreign direct investment (FDI) in different sectors such as petrochemicals and refineries, oil and gas, power generation, and many more. Also, the presence of big firms such as Reliance Industries Ltd (RIL), Bharat Petroleum Corporation Limited, Hindustan Petroleum Corporation Limited, and Cairn India attracts both domestic and foreign investments on a large scale.

From 2017 to 2021, the market expanded at 3% CAGR and is anticipated to increase by 5.7% in 2022. This high increase in Y-o-Y growth in 2022 is mainly due to the V-shaped recovery in manufacturing and other industrial activities after the onset of COVID in 2020.

In recent years, leading companies have started using software based on EJMA, ASME, and other certifications. These software are produced both in-house as well as are outsourced. Also, the increased demand has forced companies to shift from traditional paper-backed systems to automated digital platforms for planning, production, QA/QC, and stores.

The potential of elastomeric (rubber)-based joints to lessen noise and vibration and accept varying temperature motions in piping systems has long been acknowledged. Joints with increased performance and operational life have been created as a result of recent developments in engineered elastomers and textiles, which benefit both new and existing construction projects.

IMF projects India to grow 7.4% Y-o-Y in 2023, which remains one of the fastest growth rates among major economies. In India, public and private infrastructure has witnessed sustained incremental growth over the years. This can be attributed to the favorable economic conditions in the country.

The expansion joints market is anticipated to witness accelerated and continuous growth due to ongoing public infrastructural projects in the country, which are anticipated to create public-private partnership (PPP) opportunities over the coming years.

It is estimated India will create opportunities for numerous players to penetrate the market. This could present significant opportunities for local firms to form joint ventures or even be acquired by larger players that want to gain a foothold in this domestic market.

Inferior-quality and cheap substitutes for expansion joints are easily available across the country. Owing to their low cost, many end users prefer purchasing them for temporary use. Similar products are being developed by local manufacturers; however, they do not meet the standard regulatory norms and guidelines. Usage of low-quality joints that do not need maintenance can result in unexpected consequences in both small- to medium-sized industries.

This increase in the availability of low-quality expansion joints has been hampering market growth. To mitigate these concerns, brand awareness measures can be undertaken. Also, legal support regarding the usage of certified products can be initiated. 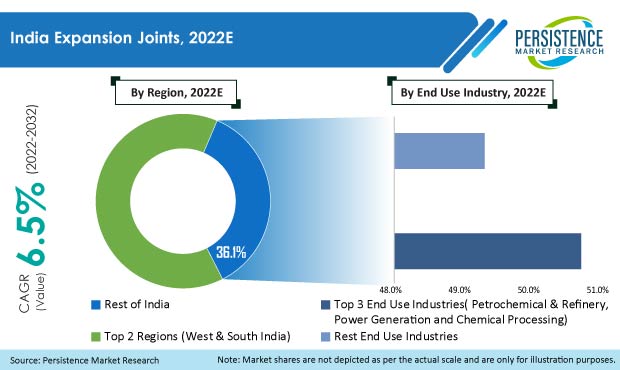 Over the forecast period, the expansion joints market in India is projected to expand at a CAGR of 6.5% and create an absolute dollar opportunity worth US$ 62.9 Mn.

West India is set to remain dominant through the forecast period and is anticipated to account for more than 35% share on a value basis by 2032. The vast industrial sector present in the region has significantly contributed to the growth of the market in the country.

Indian expansion joint companies are rapidly establishing their presence within overseas markets as well. However, this is true for only a few leading players. Also, the export percentage for each has remained between 20%-30%.

Lack of a clear USP or positioning message may be one factor. Looking at different exporting nations reveals that each expansion joint exporter has a unique USP. While European nations and the United States are renowned for their dependability and technological advancements, China is known for its competitive and affordable prices. It seems that producers in India have not yet established a distinctive position in the global market.

Due to extensive application in the petrochemical industry, power generating industry, heavy industry, and other industries, the expansion joints market is anticipated to rise over the coming years. The need for expansion joints will increase in the next years as the country enters a stage of development marked by a growing railroad industry, and piping systems utilized in the oil & gas and petrochemical industries, among other things. The market will boom due to the demand for heavy gear and equipment brought on by rising urbanization and industrialization.

Original equipment manufacturers prefer to combine cutting-edge features to provide great compatibility, excellent strength-to-weight ratio, and high conductivity. This will further drive the production of more expansion joints over the years to come.

The metallic type segment is estimated to dominate the expansion joints market in India through the forecast period and is set to expand at a CAGR of 6.4%.

Metal expansion joints are advanced components in the process line with a high level of responsibility. Metallic expansion joints need to absorb various pressures, temperatures, vibrations, displacements, and dilations during normal operation. This type of joint is extensively used in a wide range of industries, from energy to manufacturing.

As per this analysis, the power generation sector is estimated to hold more than 19% share of the market by 2032. However, the segment is expected to witness a drop of 170 BPS by the end of 2032.

India, with an installed power capacity of 404.13 GW, as of July 31, 2022, is the third-largest producer and user of energy globally. Increasing electrification coupled with a growing population and per-capita usage will further drive the sector’s growth. In 2022, it is predicted that power consumption will reach 1,894.7 TWh.

Power is one of the most crucial infrastructure aspects of national economic development. For the Indian economy to grow as needed, electrical infrastructure needs to be continuously developed. Therefore, universal access to inexpensive power in a sustainable manner has been the guiding philosophy of India's power sector.

The Indian expansion joints market witnessed a decline in sales in FY2020 due to the COVID-19 pandemic. The pandemic caused the shutdown of many industries, ranging from railways to cement, chemicals, and others. A decline in industrial activity further decreased power demand.

The market was also negatively impacted by supply chain constraints and bottlenecks that were brought on by COVID-19. A sudden price increase due to a steep increase in demand also had a negative impact on the market.

Leading manufacturers of expansion joints are partnering with prominent end users and EPC companies for long-term supply contracts. Furthermore, market players are expanding their channel reach for enhanced sales and services for their customers by increasing their presence in key cities across India.

How much is the market for expansion joints worth in India?

The India expansion joints market is currently valued at US$ 71.4 Mn.

What is the predicted growth rate for the market?

Who are the top 5 expansion joint manufacturers?

How is the expansion joints market shaping up in West India?

Over the 2022 to 2032 assessment years, sales of deluge valves are predicted to increase at 4% CAGR and reach a market valuation of US$ 2.4 Bn..

The global limit switch market is anticipated to witness a growth rate of around 6.1% over the decade. .

High performance butterfly valve consumption across the world is expected to witness a CAGR of 8% through the period of 2021-2031..