As per value growth rate, Persistence Market Research has anticipated the household insecticides market to witness a CAGR of 6.9% over the assessment period of 2021 to 2031. Rising concerns over vector-borne diseases are expected to drive demand going ahead.

As per the recent market research published by Persistence Market Research on household insecticide sales, the market progressed at a CAGR of 3.4% over the last five years.

Vector-borne diseases are a key challenge for many countries and put a lot of strain on the healthcare system. A large number of people get infected by such diseases with a significant number of fatalities, and it remains a key global challenge. Flies and mosquitoes play a vital role in the spread of these diseases.

Rise in awareness concerning preventive action that can be taken concerning the spread of vector-borne diseases is expected to increase the consumer base of household insecticides over the assessment period of 2021-2031.

Moreover, disposable income of population across the globe is increasing at a significant pace, especially in economies such as India, China, Turkey, and ASEAN nations. Owing to this increase in per capita income, average household expenditure on insecticide products is also expected to witness growth.

In addition, International tourism has increased at a steady rate. More people are opting for travel to reduce stress. Increasing tourism to experience natural wild life habitats will lead to growth in demand for household insecticides, as tourists travelling to such regions are often advised to stay wary of mosquitoes and insects and use insecticides such as creams and gels as protection.

Furthermore, rapid rise in urban population across the globe is also elevating the consumption level of household insecticides, with increasing need of products that keep household menaces such as cockroaches, ants, and mosquitoes in check.

Emerging economies such as India and China are the main players contributing to global urbanization. According to the United Nations, China is expected to account for 20% (276 Mn) and India for 16% (218 Mn) of total increase in global urban population from 2011 to 2030. This remarkable rise in urban population, along with the above-mentioned factors, is expected to drive demand for household insecticides at a CAGR of around 6.9% through 2031.

Increasing side-effects of insecticide products on humans is leading to health concerns worldwide. Thus, replacement of toxic insecticide ingredients with eco-friendly or bio-based insecticides could open up potential opportunities for manufacturing companies. With consistent rise in awareness concerning the adverse effects of harmful synthetic chemicals on the human body and the wider ecology, there is huge consumer interest toward bio-based products. 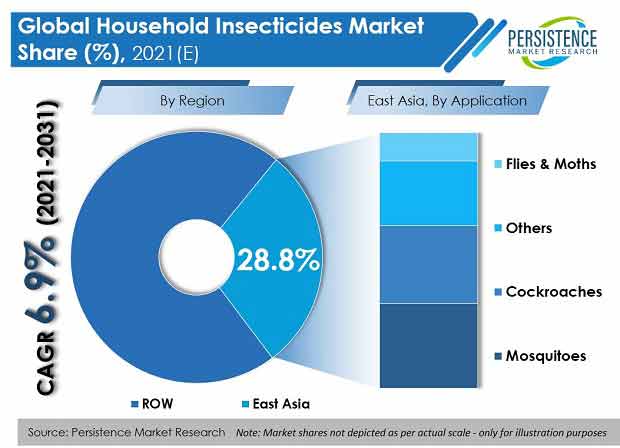 Which Factors are Hindering Growth of Household Insecticide Suppliers?

Insect repellents are known to be toxic and can lead to health issues. As a matter of fact, many studies have shown that insecticides and insect repellents can have long-term adverse effects. This is a primary factor negatively impacting demand growth of household insecticides.

For instance, DEET (N,N-Diethyl-meta-toluamide), which is used in insect repellents, is toxic and can have long-term adverse effects. Furthermore, recent research results have also proved that DEET is a neurotoxin that increases the toxicity of the other chemicals in a product. Factors such as these will impede growth of the market during the forecast period.

Moreover, various stringent regulations imposed over the use of synthetic chemicals in household insecticides across regions is expected to hamper growth of the market over the forecast period.

Why are East Asia and Europe Leading the Sales of Household Insecticides?

Moreover, China, Japan, and South Korea have substantial share of urban population. This is expected to benefit the market over the coming years. However, increasing number of stringent regulations in the region may hamper regional market growth to some extent.

Europe is also one of the prominent regions for household insecticides. High awareness among the population about vector-borne diseases and increasing spending on personal protection products make the regional market lucrative for manufacturers.

Moreover, consumers based in Europe are willing to pay a premium for bio-based or natural products over conventional products, owing to which, demand for such insecticide products is increasing across the region.

What is the Demand Outlook in Germany for Household Insecticides?

Germany is a dominating country in the European market. The country is expected to hold around 25% of the regional market share. High awareness among consumers about the adverse effects of vector-borne diseases and role of insects in spreading them is a key factor propelling the market in the country.

However, various stringent regulations imposed over harmful synthetic chemicals in the country and the European region are expected to hamper growth of the market to some extent.

What Makes India a Lucrative Market for Household Insecticides?

India is an emerging economy and contributing a fair share to the growth of urbanization across the globe. Average disposable income of the working population across the country has witnessed significant increase over the past two decades. This factor, along with increase in urban population, is expected to drive consumption of household insecticides over the coming years.

Moreover, with rise in per capita income across the country, per capita spending on household insecticides is also expected to rise at a substantial rate.

Moreover, awareness regarding vector-borne diseases is also increasing at a rapid pace in the country, with dedicated efforts by the government as well as private healthcare players. According to latest data by WHO, the death rate from malaria in the country is 1.89 per 100,000 people, which ranks India as the number 45 in the world. With rise in awareness toward such diseases, it is expected to benefit the household insecticides industry over the decade.

How are Household Insecticide Sales Shaping Up across the U.S.?

In 2021, the U.S. market is expected to grow 4.7% year-on-year, bucking initial skepticism about how the market would perform during a global pandemic. Across the whole of North America, total sales of household insecticides are expected to close in on US$ 1.9 Bn in 2021.

Strong research & development capabilities of key players in the country provides an additional advantage for the market. High share of urban population, significant awareness pertaining to spread of vector-borne diseases, and considerable share of spending on personal protection products in the country are expected to boost market expansion.

Which is the Most Preferred Type of Household Insecticides?

Demand for powder granules is expected to increase 5.2% between 2020 and 2021, which is anticipated to give the overall global household insecticides market year-over-year growth of 5.8% in 2021, according to the Persistence Market Research report.

Rise in research & development activities for product innovation and expansion of product portfolio is expected to add new product types to the market.

What is Growth Outlook for Natural Insecticides?

Natural Insecticides are expected to witness prominent growth over the assessment period of 2021-2031. Shifting consumer preference toward bio-based products is key factor propelling demand for natural insecticides. Increasing awareness about the adverse effects of synthetic insecticides among consumers is elevating demand.

Key manufacturers focusing heavily on developing eco-friendly solutions with the use of natural insect repellants such as Neem extract and others to cater the growing trend of sustainability. Use of eco-friendly products is trending irrespective of their comparatively higher prices.

Key manufacturers are undertaking dedicated branding and marketing campaigns to emphasise on their eco-friendly products portfolio in order to leverage this growing trend.

Which Application of Household Insecticides Drives Most Revenue?

Anti-mosquito products are the most grossing type of household insecticides. The segment is expected to hold more than 30% of revenue generated in the global market.

Mosquito-carried diseases such as dengue, malaria, etc., cause millions of fatalities across the world each year. Hence, there are a plethora of products available in the market to deal with this menace. Also, rising awareness regarding diseases spred by cockroaches is elevating consumption of household insecticides used to kill cockroaches.

Key manufacturers are engaged in strategic mergers, acquisitions, and collaborations to expand their business reach and gain a competitive edge in the market. Market players mainly focus on research & development activities to update their portfolios and relish maximum opportunity created in the market.

Global deodorant and antiperspirant ingredients market is estimated to account for US$ 1,619 million in 2015, which is expected to increase to US$ 2,390 million by 2021 with CAGR of 6.7%.

Industrial Gases Market report provides detailed valuation on the key market dynamics such as drivers, trends, opportunities, and restraints, along with detailed information about the industrial gases market structure. This market research report presents exclusive facts and figures about how the industrial gases market is anticipated to will grow over the forecast period of 2019-2029..

Global cosmetics ingredients market between 2015 and 2025 - it is expected to register a CAGR of 4.5% during the projected period & notch healthy revenues.