Electric parking brakes are not only replacing the conventional hand brakes in modern vehicles, but also adding valuable features such as space management, interior styling, and crashworthiness of new automobiles. In addition, electric brake systems are also facilitating reduction of power consumption as well as vehicle weight, which signifies that electric parking brakes can soon become an integral part of new-age automobiles.

Manufacturers are also focusing on enhancing the safety for light commercial and heavy commercial vehicles with the help of advanced designs of electric parking brakes. Such advancements in modern automotive engineering are transforming run-of-the-mill automotive models, indicating a potential for innovation with the next-generation technologies in the electric parking brakes market.

Looking at the growth prospects of global electric parking brake systems, Persistence Market Research has provided comprehensive insights on the overall likeliness of the business for OEM giants in the industry. 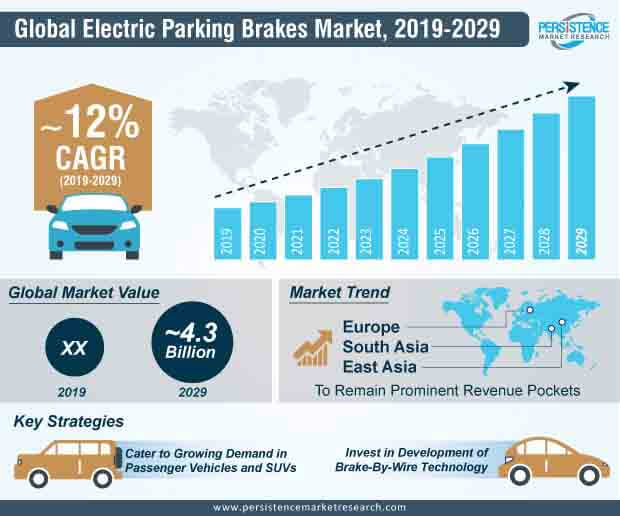 The auto-hold brake function in electric parking brake systems is making stop-start traffic a more relaxed affair for customers. Within the automotive segment, there is an increased competition between the key players who are investing significantly in advanced technology.

For instance, BMW has announced that the M8 and M8 Competition models will have brake-by-wire technology, a technology adjacent to drive-by-wire technology; which reduces the weight by two kilograms and employs a vacuum-free brake booster to enhance the car’s overall efficiency.

On the other hand self-driving cars are propelling the demand for technologically compatible components like electric parking brakes. Thus leading OEMs and aftermarkets are investing heavily in research & development (R&D) to introduce innovative designs of electric parking brakes that can meet the requirements of the autonomous cars industry.

Likewise, Hyundai Mobis announced to launch an open innovation center ‘M-Cube’ in Silicon Valley of the US to make a full-fledged commitment to source and invest in startups possessing new technologies for future such as self-driving vehicles.

The automotive market is estimated to be left with only a handful percentage of new cars on sale that have a manually operated handbrake; Dacia and Suzuki being the major players in this bracket. Premium brands such as Audi, Jaguar, Land Rover, Lexus, Mercedes and Porsche, no longer have car models on sale that are equipped with manual parking brake.

This has led to note-worthy transformations in the electric parking brakes market on a global level in terms of diversifying business operations and change in focus of key manufacturers in regions that are fetching great revenue, volume and long-term sovereignty for the electric brakes market.

The global electric parking brakes market value has increased rapidly in the past few years, and reached ~US$ 1.2 billion in 2018, and is estimated to be valued at ~US$ 1.4 billion by the end of 2019.

For instance, automotive giant Aisin Seiki Co. Ltd. announced that it has entered into a joint venture with Leon Import, S.A. (Leon) to establish an aftermarket import and sales company located in Panama to serve customers in Central, Southern and Caribbean markets of America.

Other factors such as strong competition in the automotive sector, increasing electronic components per vehicle and government’s appeal to manufacture safer vehicles have been instrumental in reinforcing the installation of automatic driver assistance systems like electric brakes.

Similarly, Hyundai Mobis has developed a dual-mode electronic steering system optimized for autonomous driving, inbuilt with safe control technology such as steering and braking coupled with sensor and positioning technology. Such technological advancements have not only offered lucrative opportunities for key players to incorporate in their automotive operations, but also prepared the market environment for increased competition to fulfill the demands of domestic and commercial customers in the coming years.

Further rise in the adoption of electric vehicles is another factor for industry growth in the electric parking brakes market.

Electric parking brakes require a lot less physical effort and don’t need to be adjusted like a traditional lever, which creates free space inside the cabin, especially at the center consol. Most electric parking brakes disengage automatically when the driver pulls away, which come with an add-on of automatic hill-hold functionality.

Likewise in the electric parking brakes products segment, electric-hydraulic caliper systems provide improved system performance, greater comfort for the operator and reduced plumbing costs, which act as key differentiators from its contemporary - cable-pull systems. ­­­Car manufacturers will observe a decline in the number of car sales with traditional handbrakes. 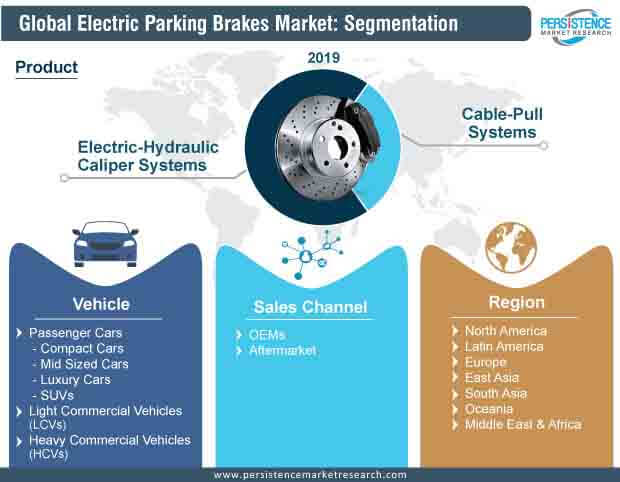 In light of the increasing number of cars with electric parking brakes, one of the major drawback is the absence of feelThe lack of distinctive tactility compels the driver to look at the system for operating the vehicle, whereas a physical switch can be activated by feel.

This recall of faulty electric parking brakes was raised as a capacitor on the circuit board and/or the actuator stroke sensor magnetic ring, which is fixed in the control unit of the electronic parking brake, poses as a risk to crack over time. This could result in failure of the emergency brake that does not engage if the transmission is not in the recommended gear when parked and the vehicle could roll away.

The automotive industry also faces the wrath of counterfeiters. According to the FICCI report, ~30% of the automobile components in India are counterfeit. This counterfeit is carried out by tier 3 players that hold a significant share for the manufacturing and sales of refurbished or duplicate automotive components in the market and can hinder the business growth of electric parking brakes for the years to come.

Authors of PMR’s study on the Electric Parking Brakes market are optimistic about the positive growth potentials in the automotive industry. The global electric parking brakes market is estimated to be dominated by Europe in terms of market share for the forecast period of 2019–2029.

Also South Asia and East Asia are projected to show fast growth in terms of revenue and production scale of electric parking brake products. In the products segment, electric-hydraulic caliper systems have the upper hand as compared to cable-pull systems owing to key differentiators for the ease of the car driver and overall technology.

As consumers are highly drawn towards aesthetic, comfort and safety features in cars, SUVs in passenger vehicles are expected to adopt new innovations in the electric parking brakes technology, followed the luxury cars sub-segment. However light commercial vehicles (LVCs) and heavy commercial vehicles (HVCs) are estimated to incur a slow growth rate for the adoption of electric parking brakes technology.

Manufacturers on the other hand are strategizing on latest technological innovations such as brake-by-wire technology that significantly reduces the weight of the car and the adoption of self-driving cars with technologically compatible components like electric parking brakes.

Electric parking brake is an automatic parking brake that replaces the manual parking brake lever by a small switch. This technology provides greater freedom for vehicle designers by providing more space in car and better fuel efficiency from reduced system mass. Additionally, due to the absence of mechanical hand brake parts, it provides benefits such as the reduction in overall weight of the vehicle by up to 7.3 kg. Electric parking brakes are widely utilized in luxury and premium cars.

The global electric parking brake market is expected to grow at a CAGR of ~12.0%, and is estimated to reach a value of ~ US$ 1.2 Bn by the end of the forecast period.

Electromobility Playing a Pivotal Role in the Automotive Industry

Alterative powertrain concepts with high level of integration are gaining significant traction in the automotive industry. The concept of electromobility & an electrical system integrated with all the required power electronics for an electric parking brake is very attractive when it comes to certain sensitive factors, such as the system cost and weight restrictions.

Automotive Industry Being Severely Affected by Ploys of Counterfeiters

The global automotive aftermarket is estimated to be over a trillion dollar, which serve thousands of market players. In which, tier-2 and tier-3 players hold a significant share, and several tier-3 players are engaged in the manufacturing and sales of auto components that are either refurbished or duplicate of original manufactured products.

Every year, the automotive industry loses double digit billion dollars due to counterfeiting, which is a major setback for prominent OEMs. Counterfeiting of auto components, especially electronic components such as electric parking brake destroys the brand value.

Also, locally made parts are offered at comparatively lower price, resulting in the increased market competition. This is expected to hinder the growth of the electric parking brake market during the forecast period.

The automotive industry has been competitive since decades due to the presence of giant players investing significantly in advanced technologies. To gain a competitive edge over other players, manufacturers are relying on product development that offers functional and economic benefits to consumers.

Prominent players of electric parking brake have strong focus on innovating new technologies in the brake system to develop new products and compete in the market by providing full electric brake system with reduced vehicle weight.

As per PMR's research study, global automotive brake system market is estimate to record a healthy CAGR of 5.7% along with a healthy revenue from 2017 to 2022.