Rising incidence of blood and infection-related diseases in the past years is the major factor surging demand for automated ESR analyzers. These analyzers offer benefits such as being user-friendly, handheld barcode scanners for patient identification, compact sizing, closed tube sample testing, and rapid results. Technologically-advanced automated ESR analyzers provide accurate testing results in a few seconds by using blood samples of 100uL, which is ideal for the geriatric and pediatric population.

Changing lifestyle and expanded geriatric population have led to rising infections and related diseases, which has created a vast opportunity for automated ESR analyzers. Manufacturers are focusing on developing innovative products to retain their market share. For instance, key players are focusing on the development of new products to cater to multiple applications. Manufacturers are adopting innovative marketing strategies putting increasing focus on technology advancements and innovation through investments in cutting-edge products to cater to evolving research needs.

According to Persistence Market Research’s analysis, the automated ESR analyzer market has expanded at 4.1% CAGR from 2016 to 2020.

In recent years, there has been a gradual shift from manual to automated analyzers, which is boosting demand. Growing adoption of automated ESR analyzers with advanced and innovative technology has boosted laboratory workflow. Taking measurements from EDTA tubes has further simplified test procedures. Automated ERS analyzers have the ability to enhance both, workflow and turnaround time. Advancements in technologies are leading to rising demand for automated ESR analyzers.

Due to the outbreak of coronavirus, there has been a disruption in the demand and supply of various medical devices, and this has impacted the revenue of the automated ESR analyzer market. The pandemic has led to a decrease in patient flow in hospitals, specialty clinics, and ambulatory surgical centers. However, this is considered to be a temporary effect, and the market is expected to recover soon due to rising concerns regarding the spread of infectious diseases.

What is the Extent of Expanding Geriatric Population on Automated ESR Analyzer Demand Increase?

The world’s aging population is growing drastically, and those aged 60 years and above account for over 10% share, which is expected to rise to over 20% by 2050. Older persons are generally more vulnerable to infections as compared to younger adults. In addition, it is a known fact that, growing old is majorly associated with immune dysfunction, particularly in cell-mediated immunity. Aged people suffer from a variety of infectious diseases, some of which affect the integrity of host resistance to infections. This is boosting demand for ESR tests for infectious diseases among the elderly population. Rapid growth in the elderly population is estimated to increase the number of ESR tests, which is expected to boost automated ESR analyzer demand over the forecast period.

Why is Westergren’s Method Adopted Globally for ESR Testing?

The Westergren’s method is adopted across the world as the ideal method for ESR tests. This method is known to reduce incineration and consumable expenses by eliminating the use of citrated blood collection tubes. Furthermore, the Westergren glass tube is highly accurate as well as reusable, which decreases the additional cost for new pipettes. Westergren is the standard method that is used to evaluate all other ESR measurement methods and techniques. Most laboratories perform ESR testing using this method. Originally, it was constituted by the International Committee of Standardization in Hematology (ICSH), but now, this procedure is globally used as the standard method for ESR.

Advanced healthcare facilities are creating opportunities for manufacturers to capture a significant share in the automated ESR analyzer market in terms of revenue. Various governments across the globe are heavily investing in the healthcare industry. Increasing usage of these analyzers in diagnostic laboratories, hospitals, and academic institutions is surging demand. Rising adoption of advanced healthcare testing equipment in clinics and hospitals is contributing to market growth. High expenses are incurred for advanced diagnosis, care, and treatment regimes. The high susceptibility of geriatric patients to diseases and infections is elevating treatment and hospitalization expenditures. This indirectly means more demand for automated ESR analyzers for various procedures. 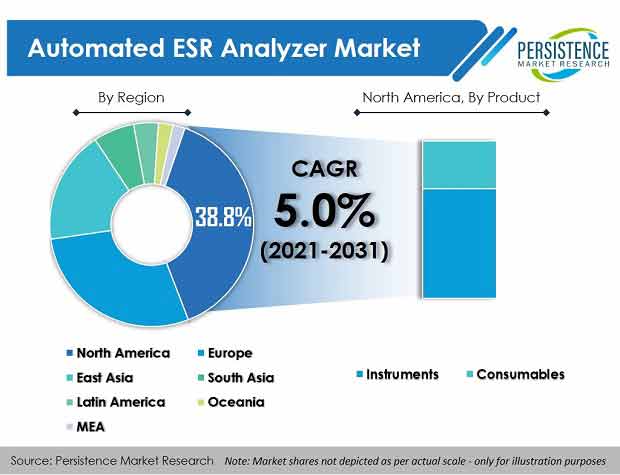 Why is there Huge Opportunity for  Manufacturers of Automated ESR Analyzers in the U.S.?

The healthcare system of the U.S. is well renowned for its advanced infrastructure and high expenditure. Care centres and hospitals strictly abide by various regulatory rules and insurance policies in the country. Government and regulatory bodies in the U.S. are laying out several cost-containment plans to reduce their healthcare burden. The shift from a volume- to a value-based system is majorly driven by - various measures undertaken by providers, governments, biotechnology companies, and insurance payers. Some of the measures are outcome-based profits, pricing, risk sharing, competitive tendering, and price control. A value-based healthcare system will not only provide improved outcomes through integrated care pathways, but also levy pricing pressure on medical device companies, and this is likely to impact investments on the R&D of advanced medical treatment technologies. The market in the U.S. is the biggest in North America, which holds the highest global share, and is expected to progress at a healthy CAGR of over 4.5% during the forecast period.

The Robert Koch Institute (RKI) is a German government agency and research institute, which is responsible for disease control and prevention. Recent data provides the status of over 50 infectious diseases in Germany as of 2016. The data shows increased incidence of a multitude of infectious diseases, including, but not limited to, leprosy, HIV/AIDS malaria, measles, meningococcal meningitis, syphilis, typhus tuberculosis, and whooping cough. It is noted, however, that most of the more tropical diseases that were brought into the country from Africa have been contained, and there have been no mass outbreaks among the general population. However, increased cases of infectious disease is expected to create tremendous growth opportunity for automated ESR analyzers in Germany, the most in Europe, over the coming years.

How is Increasing Geriatric Population in China Influencing Demand for Automated ESR Analyzers?

China is the most populated country in the world, facing the rapid aging of its population.  According to data from China's National Bureau of Statistics, at the end of 2018, 11.9 percent of its population (166.6 million people) were 65 or older.  China's aging crisis is well underway. Given the declining fertility rate, China's aging process is irreversible, and this is increasing pressure majorly on the healthcare system of the country. China has adopted various plans to deal with the aging population, including improving and building health and medical systems for the elderly, encouraging family care combined with social care, promoting flexible retirement, and loosening the birth policy. The rising geriatric population is likely to fuel automated ESR analyzer sales in the country.

What are the Restrains that GCC Countries Face in for Automated ESR Analyzers?

The primary factor restraining the adoption of automated ESR analyzers in GCC countries is the absence or lack of trained and skilled medical professionals in the health space. Evidence suggests that, a large number of professionals across the world do not receive proper training in handling medical devices, and are yet engaged in testing and diagnostic services. Unavailability of skilled medical professionals leads to false prescriptions, putting health at risk. The market in GCC countries is expected to witness sluggish growth through 2031.

Fully-automated ESR analyzers are those that allow the fully automatic analysis of ESR, right from the time of insertion of a sample tube, thus enabling walk-away operation. This makes them more beneficial over semi-automated ESR analyzers. Depending upon the capacity required, these instruments cover a wide range of channels to enable usage across multiple end-use scenarios. Advanced versions of fully-automated analyzers require minimal sample volumes, which makes them the best choice for the analysis of the samples of pediatric patients.

Companies are heavily investing in R&D to expand their product portfolios and market presence, globally, especially to cater to the evolving needs of researchers. There has been intense pressure on healthcare systems to improve healthcare delivery and decrease costs. Decline of the reimbursement rate under the Clinical Laboratory Fee Schedule (CLFS) has had a profound impact on U.S. laboratories, thus making pathology services less profitable, and forcing several providers to merge. The automated ESR analyzer market space witnesses high competition with several market entrants and a few large players. Small- and medium-sized laboratories are consolidating to compete with larger players. Many District General Hospitals (DGH) in Europe are only equipped with a core laboratory for urgent testing and scientists cross-trained in all pathology specialties. Majority of these core laboratories are a part of wider pathology networks (largely privatized).

*The list is not exhaustive, and only for representational purposes. Full competitive intelligence is available in the report.

Q1. Which is the most lucrative market for automated ESR analyzers?

The U.S. currently leads the global automated ESR analyzer market. Sales in the U.S. are estimated to be 89% of North America’s share throughout the forecast period.

Q2. Which is the dominating automated ESR analyzer product?

Instruments are highly sought-after in every market. Demand for instruments is increasing due to rising adoption acrosas hospitals and diagnostic laboratories.

Hospitals are leading as far as demand for automated ESR analyzers is concerned, owing to their advanced medical facilities.

Q4. Which are some of the leading companies offering automated ESR analyzers?

Seasonal flu is a serious disease that infects a large population and causes serious illness, resulting in a large number of hospitalizations and deaths every year. This factor is increasing the demand for faster diagnosis and driving the growth of the influenza diagnostics market..