Fluorinated blends are widely used in Western Europe Fluorinated Solvents Market, which can be attributed to the relatively low price of blends in comparison to that of pure HFE, HFO/HCFO and HFC. Various companies are providing fluorinated blends. For instance,

Fluorinated solvents are used in various end-use industries, such as medical, electronics, metal aviation and aerospace, for cleaning purposes. They are also used in degreasing as carrier solvents and in the refluxing of printing wiring assemblies.

The price of fluorinated solvents is relatively high as compared to that of chlorinated, brominated, light petroleum distillates, glycol & glycol ether and formulated hydrocarbon solvents. In 2014 and 2015, Solvay announced an increase of 20% and 15%, respectively, in the price of Forane (Brand name of Fluorinated solvent offered by company).

Thus, due to the aforementioned factors, the Western Europe Fluorinated Solvents Market is expected to gain momentum at a rapid rate during the forecast period.

In this report we have considered Asia Pacific, North America and Europe as the prominent regions for the consumption of Fluorinated Solvents attributing to the intense presence of end use industries and coupled with stringent regulations towards the phasedown of specific fluorinated solvents and shift in trend towards the increase in consumption of HFO/HCFO and HFE based solvents products in these region as compared to the rest of world.

Fluoridated solvents cannot be tracked for Latin America and Middle East & Africa owing to the low/insignificant presence of production as well as consumption of HFE and HFO based solvents products. Attributing to the economic outlook of Latin America it is estimated that consumption of HFO and HFE based products are used less as they have relatively high price in comparison to the other Fluorinated Solvents.

Fluorinated Solvents market is heavily regulated which also makes the restraint for the production and consumption in specific regions as manufacturers, distributors and end user have to report the production and consumption of specific fluorinated solvents in each application which makes the restraint to estimate for Latin America and Middle East & Africa as these regions account very low/insignificant market share in the overall Fluorinated Solvents Market. Thus owing to the above stated reasons we have considered the Asia Pacific, North America and Europe as the major Fluorinated Solvents consuming regions during the forecast period 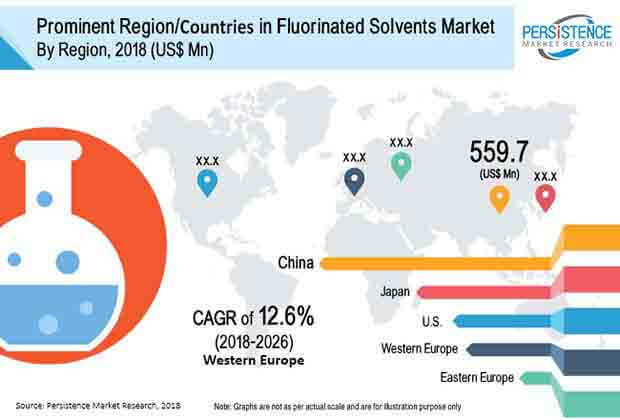 White Spirits Market are of four types - Type 1, Type 2, Type 3, and Type 0, which are categorized on their aromatic content basis. White spirits are consumed in a wide range of applications such as paint thinners, cleaning solvents, degreasing solvents, fuels, and disinfectants, among others..

The behenyl alcohol market has seen steady demand from the cosmetics industry. Moreover, globally, per capita consumption of cosmetics is increasing at a rate of 3.4% per year.

Global bismuth market is estimated reach around US$ 225 Mn in 2016 and is projected to expand at a moderate single-digit CAGR in terms of value from 2016-2024.