The global soy sauce powder market is anticipated to expand at a healthy CAGR of over 6% from 2020 to 2030. Demand for conventional soy sauce powder will continue to remain high across regions, accounting for around 95% market share.

Soy sauce powder is used as an ingredient in a number of food products such as dressings, snacks, sauces, soups, dips, meat and seafood, and many other applications. Increasing popularity of international cuisines such as Japanese, Chinese, Thai, Malaysian, Vietnamese, and Indonesian across the globe is one of the major factors driving demand for soy sauce powder. Persistence Market Research’s report analyzes the consumption outlook of soy sauce powder, globally, for different applications. The report also talks about the impact of COVID-19 on the soy sauce powder market. Growing consumer concerns regarding different flavors and taste preferences and evolving consumer dietary preferences have led to a surge in demand for flavor-enhancing ingredients. High functionality and convenience of transport offered by soy sauce powder are the primary reasons that have triggered market growth market.

From 2015-2019, the soy sauce powder market experienced a value growth of 4.4%. Soy sauce powder offering umami flavor to different food products along with getting easily dissolved in water for creating soy sauce has witnessed substantial demand from the food industry.

Increasing demand for nutritious yet savory food is one of the major factors that has triggered the growth of the umami flavor market, and as umami type flavor offers excellent palatability, it is now widely used in bouillons and a variety of seasonings and blends. Umami type flavor is described as the fifth flavor apart from the traditional four flavors of bitter, sweet, sour, and salty, and imparts a ‘savory taste’ to food. Umami flavor is considered to be a game-changer in the evolution of formulations for sodium reduction. A variety of umami flavors can be utilized to successfully reduce sodium or salt content in food and drink products. For instance, according to the Glutamate Association, MSG can lower the content of sodium in a product by approximately 40%, while still maintaining the desired flavor.

Yeast extracts, hydrolyzed proteins, and soy sauce powder are some of the most widely used umami-generating or enhancing ingredients in food and drink manufacturing to develop vegan or vegetarian products or meals that offer savory flavor, which can be used as suitable meat substitutes.

How Will the Changing Landscape of the Global Foodservice Industry Trigger Demand Growth of Soy Sauce Powder?

The foodservice industry has witnessed tremendous growth over the past decade, owing to factors such as rising disposable income and introduction of innovative food products. Busy lifestyles and increasing working populations are also key factors in the sector’s growth. Changes in consumer tastes and behaviors have also contributed to growing consumer preference for restaurants and other foodservice outlets.

Soy sauce powder falls under the versatile food ingredients category, which can be utilized in multiple applications. The foodservice industry has been using soy sauce powder as an ingredient in flavorings, salad dressings, noodles, dipping sauces, soups, and others. Furthermore, various health benefits associated with naturally fermented soy sauce have made it a vital ingredient for players in the foodservice industry that seek to target health-conscious consumers, thus driving growth of the market. 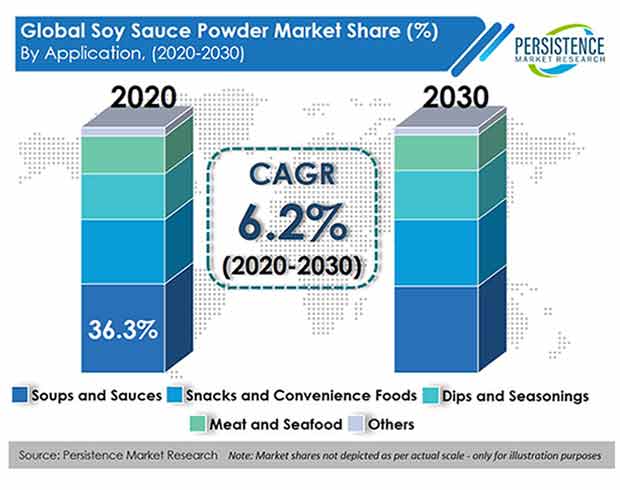 Rapid urbanization, rise in working population, increased participation of women in the global workforce, and rapidly changing consumer lifestyles are some of the major factors that have led to a keen inclination toward convenient food products, ready-to-eat meals, and fast food products. Convenient food products are gaining immense popularity and becoming essential in urban kitchens, as they prove to be a great time-saver for consumers with hectic lifestyles.

How Will Increasing Preference for Gluten-free Products Drive Market Growth?

Gluten-free diets are gaining popularity amongst consumers due to their claimed benefits such as improving health, increased energy, and weight loss. The number of consumers who are allergic to gluten is increasing, thus driving the market for gluten-free food. Customer preferences have been influenced by the growing rate of population being affected by various diseases due to the consumption of gluten, such as celiac, infertility, neurological disorders, and others. With celiac disease becoming more prevalent, consumption of gluten-free food is rising.

What are the Key Challenges Faced by Soy Sauce Powder Manufacturers?

The time required for fermentation of natural soy sauce is approximately five to eight months, which makes it difficult for soy sauce manufacturers to keep up with the demand. Majority of key players opt for acid hydrolysis, a chemical production that fastens the production of soy sauce, and completes the fermentation process within a period of few days. This process includes heating soybeans to 80°C and mixing them with hydrochloric acid, which leads to the breaking down of proteins present in the soybeans and wheat. Thus, the resulting soy sauce product is less attractive in terms of nutritional content and taste as compared to naturally fermented soy sauce products. Apart from this, the process also produces some undesirable compounds that are not present in naturally fermented soy sauce products. As a much faster and cheaper way of making soy sauce, manufacturers are increasingly opting for chemical hydrolysis, repelling customers demanding natural and healthy soy sauce powder.

Why is China a Prominent Market for Soy Sauce Powder?

According to the Food and Agriculture Organization, China accounted for approximately 60% of the global production of soy sauce, and is one of the major exporters to some of the most developed countries across the globe. Easy availability of raw material country makes it a large potential market for soy sauce powder manufacturers. High productivity of soy sauce in China ensures the availability of adequate raw material throughout the year. China primarily exports a majority of its soy sauce produce to key players engaged in the production of soy sauce powder in developed counties across the globe. Soy sauce manufacturers in China are also emphasizing on increasing the productivity of gluten-free soy sauce powder to fulfill the ever-increasing demand for gluten-free products.

What are the Potential Growth Opportunities for Soy Sauce Powder Manufacturers in the U.S.?

Rising Asian population in the U.S. and their impact on the local food scene are expected to bolster sales of soy sauce powder in the country. The number of Japanese and Chinese restaurants in the U.S. offering ethnic cuisines that use different ingredients is increasing. Soy sauce powder is one of the major ingredients in Chinese and Japanese cuisines. Ready-to-cook soups with soy sauce powder are also gaining increased penetration in the U.S., attributed to the hectic lifestyle of consumers and increased participation of women in the global workforce, leading to increased demand for convenient and tasty food.

Demand is also attributable to rising consumption of salads and dressings in the U.S., along with increased consumption of meat products. Soy sauce powder is known to add flavor to these food products while acting as a natural preservative in meat products. Rising popularity of ethnic food coupled with the easy availability of soy sauce powder in supermarkets across the country is expected to fuel market growth in the U.S. Thus, with increasing foodservice providers and food and beverage manufacturers conveying authenticity with ingredients and preparation styles to capitalize on the demand for global flavors, the market for soy sauce powder in the U.S. is expected to witness robust growth.

Why is India Set to Experience High Volume Growth Over the Forecast Period?

What are the Factors Contributing to the High Growth Rate of Organic Soy Sauce Powder?

Health benefits offered by organic food products is one of the most influential factors for the expansion of the organic products market, which, in turn, has triggered demand for organic seasonings. Apart from this, increasing government initiatives for promoting organic production is another important factor influencing demand for organic soy sauce powder for use in different organic products. As such, sales of organic soy sauce powder are expected to witness a high volume CAGR of approximately 8% over the forecasted period.

Majority of key players manufacturing soy sauce powder are emphasizing on product development strategies that are in line with evolving consumer trends. To ensure sustainability, key players are striving to offer gluten-free soy sauce powder to clinch a competitive edge in the global market. The gluten-free trend is backed by millions of consumers choosing a gluten-free diet for various reasons.

As per Persistence Market Research’s projections, organic soy sauce powder is expected to exhibit significant value CAGR of around 8%, owing to the increased consumer demand for organic food products.

As per Persistence Market Research’s projections, sales of soy sauce powder are highest in North America, attributable to increased consumer demand for convenient and ready-to-cook food products in the region.

Yes, the report has been compiled by expert analysts of Persistence Market Research, through a combination of primary and secondary research. To know more about how the research was conducted, you can speak to a research analyst.

Persistence Market Research follows a methodology that encompasses a demand-side assessment of the market, and triangulates the same through a supply-side analysis. This methodology is based on the use of standard market structure, methods, and definitions.

As per PMR's latest study reports, the global carotenoids market is expected to account for over 6,900 units over the forecast period of 2017-2026.

Global coconut milk market is set to experience a value growth of close to 9% CAGR over the next ten years..

Oat Milk Market is set to experience value growth around 7% CAGR over the next ten years..

According to the report, numerous factors contribute to the growth of the plant-based snacks market, which is projected to record a striking CAGR of over 8% through 2028. .