Denim clothes and biodiesel should drive the sodium metal market

Rapid economic growth in developing countries across the world with the subsequent rise in per capita income is expected to boost the overall growth for global textiles and apparels during the next eight years. The demand for denim cloth has shown a marked increase and sodium metal is one of the primary raw materials used to manufacture indigo dyes. Indigo dye is useful in the dyeing of cotton yarn along with manufacturing denim clothing. The growth of denim cloth is predicted to be especially strong in the APAC economies of China and India and this should certainly benefit the global sodium metal market in its wake.

The APAC country market to keep an eye on is China, followed by India and Japan 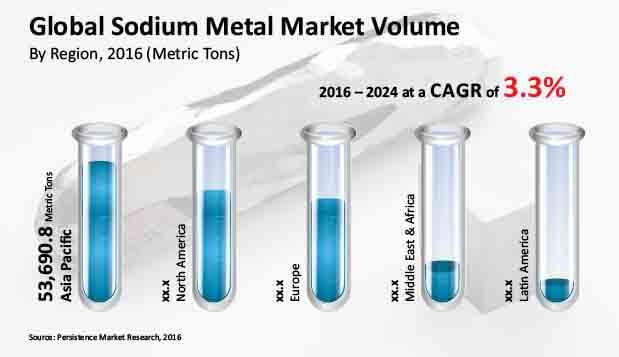 Persistence Market Research has deployed a truly unique, best-in-class research methodology to profile the global sodium metal market. The company first conducts extensive primary and secondary research that helps formulate a discussion guide. This is after thorough interaction with both specialists and industry experts. The data is then validated using the triangulation method wherein primary and secondary research data and Persistence Market Research expert analysis are combined to create the final output. The final output is then scrutinized with minute precision using advanced proprietary tools to obtain qualitative as well as quantitative insights into the global sodium metal market.

The global sodium metal market has been studied by dividing it into five geographic regions viz. North America, Latin America, Europe, Asia Pacific and the Middle East and Africa. The Basis Points Share (BPS), Y-o-Y growth projections and the market revenue size and volume forecast of major countries in every region has been indicated. The global sodium metal market report also studies specific regional trends by application. If an industry player wishes to only target one or two high-growth regions of the globe, they can refer to this informative section to make strategic investment decisions. Another section analyzes the global sodium metal market on the basis of the overall market volume, pricing analysis and absolute dollar opportunity analysis. The industry value chain highlights the intricate relationship between sodium metal manufacturers, suppliers and distributors, and end users on the basis of various end use applications such as chemical, pharmaceutical, metallurgical, and dye applications.