During the historical period of 2017-2021, the global market for dietary fibers expanded at a compounded annual growth rate (CAGR) of 6.4%.

Dietary fibers show optimistic growth trends in the near future due to several factors such as rising consumer preference for natural food ingredients, increasing consumer awareness regarding maintenance of health, and much more.

The global dietary fibers market is expected to expand at a high CAGR of 7.4% over the forecast period of 2022 to 2032. 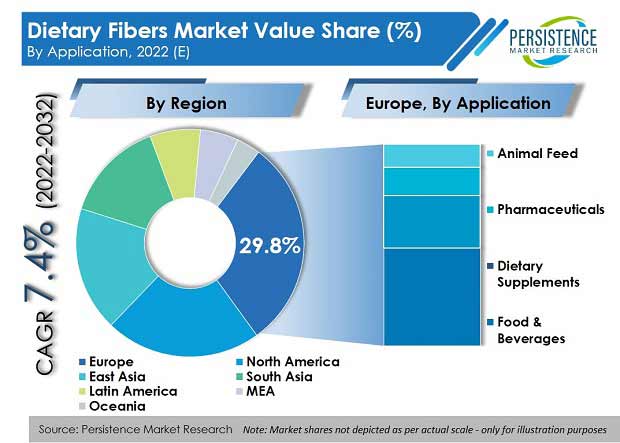 Chronic diseases/non-communicable diseases are one of the major causes of death among adults across the world. With accelerating urbanization, people are adopting a more sedentary lifestyle, which is pushing obesity rates and cases of chronic diseases upward.

Dietary fibers are helpful in the management and prevention of chronic diseases such as diabetes, cardiovascular diseases, metabolic syndrome, diverticular disease, obesity, colorectal cancer, inflammatory bowel syndrome, and others. Insoluble fiber binds to the bloodstream and adsorbs mutagens, carcinogens, and other toxins, thus preventing harmful effects to the body by the absorption of toxins and targeting those toxins for elimination.

Foods with soluble fibers such as oatmeal, beans, nuts, apples, and much more help in regulating the body’s use of sugar, which further aids in keeping hunger controlled and blood sugar in check. Thus, increased consumption of dietary fibers for leading a healthy life would drive the market for the product.

Beta-glucan is a type of soluble dietary fiber that has been associated with lowering cholesterol and improving cardiovascular health. Beta-glucan also slows down the transition of food in the intestine thereby, helping in improved digestion.

Sugar is not absorbed by the body so quickly; hence, beta-glucan minimizes the risk of blood sugar spikes and assists in the maintenance of blood sugar levels. Since beta-glucan is indigestible, it passes through the entire digestive system. It can carry cholesterol out with it as it moves through, thereby decreasing cholesterol levels.

Beta-glucan can also be used to treat cancer. It is a type of biological response modifier (BRM) that is used in immunotherapy treatment. This treatment strengthens the immune system and activates the defense response. It has the potential to delay the progression of cancer and prevent it from spreading to other places of the body.

The market for dietary fibers has grown as a result of rising health concerns and developments in R&D activities. The multifunctional benefits of dietary fibers across numerous applications, as well as technological developments to employ it as a sugar substitute, are all contributing to market growth.

The recognized health claims of dietary fibers of reducing diabetes, obesity, and cholesterol has resulted in a surge in demand for dietary fiber usage in nutraceuticals products. Dietary fibers are also known to help in keeping the gut in good shape.

Dietary fibers are beneficial for muscle performance, endurance, and muscle regeneration before, during, and after training. As a result, dietary fiber foods are opening the doors for dietary fiber makers in nutraceutical and sports nutrition industries.

Dietary fibers can be found in legumes, whole grains such as cereals, wheat bran, brown rice, and other gluten-related foods. Gluten intolerance is one of the most frequent food sensitivities among today's consumers.

Gluten-free diets are becoming increasingly popular among consumers due to the claims of improved health, higher energy, and weight loss. As there is an increasing number of people sensitive to gluten-containing foods such as wheat and other grains, demand growth of dietary fibers will be hampered.

Which is the Leading Market for Dietary Fibers in Europe?

The Italy dietary fibers market is expected to expand at a CAGR of 7.5% during the forecast period (2022-2032) and reach a market valuation of around US$ 393.2 Mn by 2032. Italy is seeing growing demand for dietary fibers that will boost the product market.

Which Country is Showing Promising Growth in North America?

In the North America dietary fibers market, Canada is showing promising growth for the forecast period and is anticipated to register a significant CAGR of 7.3%. Canada holds a market share of around 18.1% and is currently valued at US$ 291.6 Mn in 2022.

Which Sources of Dietary Fibers are Most Popular?

Dietary fibers are majorly sourced from fruits and vegetables, legumes, and cereals & grains that further includes rice, wheat, and others. Under the source segment, cereals & grains hold a major value share in the global market at more than 43% in 2022. Current market value is expected to be US$ 6.3 Bn.

Market value share of soluble dietary fibers is 80.3% in 2022, and is further anticipated to be valued at US$ 11.8 Bn by the end of the forecast period in the global market.

Dietary fibers are majorly found in vegetables, fruits, legumes, and whole grains. During the pandemic situation, several governments were forced to implement harsh lockdowns and limitations on movement and business. This heavily affected the trade scenario of fruits and vegetables, and thus hampered market growth of dietary fibers.

Various businesses, notably the food & beverage industry, faced a setback due to the shutdown of production lines. Disruptions in the supply chain resulted in the scarcity of raw materials and reduction in the output of finished products.

However, due to its nutritional and health benefits, global demand for dietary fibers would see substantial growth over the upcoming years with the relaxation of limits on movement and the opening up of economies.

Major dietary fiber manufacturers are adopting strategies such as proper utilization of corn, wheat, and chicory root for the extraction of dietary fibers and providing them for application in various industries, including dietary supplements, food and beverages, animal feed, and others.

What is the global dietary fibers market size?

The global dietary fibers market is currently valued at around US$ 7.27 Bn and is set to expand at 7.4% CAGR through 2032.

Which region is dominating the global dietary fibers market?

The European dietary fibers market holds a major market share of around 29.8% in 2022.

Which application of dietary fibers is showing high-potential growth?

The animal feed segment is expected to expand at a CAGR of 8.4% during the forecasted period.

Who are some of the leading manufacturers of dietary fibers?

At what CAGR is the East Asia and South Asia markets expected to progress?

The East Asia and South Asia dietary fibers markets are expected to surge ahead at CARG of 9.2% and 8.7%, respectively.

What is the dietary fibers market size in the U.K.?

Crop Growth Regulators Market will reflect an impressive growth over the forecast period of 2018-2026. The worldwide consumption of crop growth regulators, in terms of revenue, is expected to account for US$ 7,387.9 Mn by 2026. .

Corn Steep Liquor Market is anticipated to surpass the revenue worth US$ 3.5 Bn by the end of 2028. The report has projected a moderate 4% CAGR for global corn steep liquor market during 2018-2028. .

Increasing demand and consumption of beer has been elevating the global yeast market, which is anticipated to grow at a CAGR of 5.4% during the forecast period 2018-2026. .