Role of healthcare advances in delivering quality care and bringing improvements in success rates has been remarkable. Healthcare services have long relied, and will continue relying on technology as a core utility for fine-tuning multiple processes and enhancing consequential outcomes.

Penetration of surgical robots is emerging as a bright spot in the global orthopedics services landscape, as the convergence of ‘orthopedics’ and ‘robotics’ has breathed new life into process efficiency and patient recovery paradigms.

The next 10 years is set to see a significant upshift in the deployment of orthopedic surgical robots, as these robots will not only enable minimally invasive approaches but also curb the burden associated with critical surgeries. 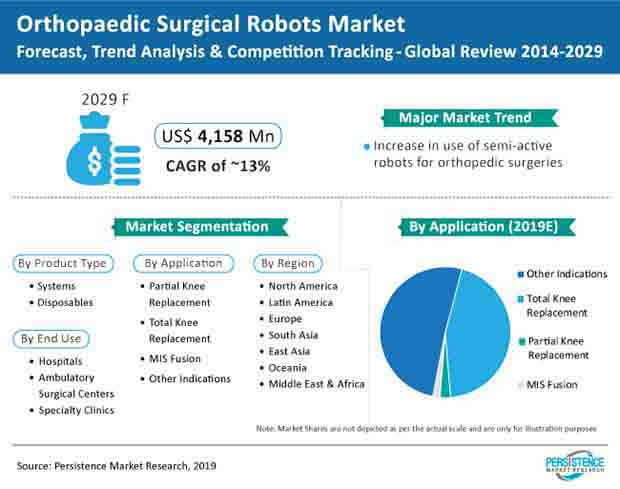 Orthopedic Surgical Robots – The Journey So Far and What Lies Ahead

By offering an eminent combination of flexibility and accuracy, these robots are outperforming the conventional orthopedic surgical robots system and proving their mettle in delivering effective care. On top of that, semi-active robots also provide user-friendly interfaces for easy access and make the surgeries minimally invasive as well as highly accurate.

Another key trend bringing major reformations is the idea of patient-specific templates for orthopedic surgeries. This concept enables the development of 3-dimensional surgical plans for implementation, along with rapid designing and manufacturing of tailor-made drilling and cutting templates.

Robotic intervention in orthopedic surgeries offers immense scope for effective application of these templates onto the affected joint surfaces. As the orthopedic community is responding to the growing inclination toward patient-specific templates, orthopedic surgical robot manufacturers are also scaling up to meet the anticipated demand.

How are Market Players Winning Customers and Growing Business?

While the leading players in the orthopedic surgical robots landscape continue to reap benefits from direct sales, the mid-level and emerging players increasingly count on distributors to level up their sales performances.

As direct sales entail heavy capital investments, it is highly difficult for the mid-level and emerging players to pull off a sales boost via direct sales.

Companies in the orthopedic surgical robots landscape are working on ‘strategy-building’ around the ever-evolving patient needs, which will serve as a key enabler for driving positive outcomes.

For instance, DePuy Synthes, in line with its strategic plan to maximize value for patients and users, is pulling off crucial inferences from the evolving customer preferences and adopting a selective approach to revive quality of its orthopedic surgical robotic offerings.

In addition, companies are also vying to expand their foothold into the emerging economies of East and South Asia, as the adoption of orthopedic surgical robotics in these regions is in a rudimentary stage with immense potential for growth.

In addition, strong brand images and constant investments in product developments and innovations uphold potential of these companies in the orthopedic surgical robots market.

The small-scale and emerging manufacturers heavily rely on third-party distributors to push their products into the market and reap profits.

The authors of this report remain extremely optimistic regarding the future of orthopedic surgical robots market in 2019 and beyond, as healthcare service providers are more than keen to integrate new technologies and deliver high value. Gone are the days when the concept of surgical robotics in orthopedic community was new, rather it is emerging as a mainstay of effective healthcare services.

Authors of the report opine that conventional healthcare dynamics, which include ingrained preferences of patients & clinics and complex regulatory frameworks, will continue to affect adoption of orthopedic surgical robots. However, transition of healthcare pools toward a ‘technology-driven’ future will continue underpinning the deployment of orthopedic surgical robots through 2029.

Technological advancements and collaborations in the orthopedic surgical robots market

Variation in modalities, use of disposables, and favorable reimbursement expected to fuel the growth of the orthopedic surgical robots market

The idea of patient-specific drilling and cutting templates was initially introduced in the early 90s by Radermacher. However, it has gained popularity over the past decade. This concept enables a 3D surgical plan to be implemented with the rapid manufacturing and designing of custom drilling and cutting templates. The idea for patient-specific templates was initially used for pedicle screw placement in spine surgeries, which used a computed tomography planning. The mating surfaces had to be clearly visible in computed tomography scans, and any areas having cartilage would not have appeared compatible because of the mating that was inevitable with the extra article cortical bone. The use of extra-articular bones required wide surgical access, which resulted in large incisions, and this was clinically unacceptable.

Recently introduced orthopedic surgery systems are circumvent to the requirement and enable the template to be directly applied to the surface of joints, which is further pushing less-invasive techniques. These orthopedic surgical systems incorporate the extremely basic principles of templates. For instance, ConforMIS, iFit/ iJig image-to-implant technology approach depends upon the computed tomography or magnetic resonance imaging scans. During a surgery, the surgeon removes any outstanding cartilage until the articular bone is visible for creating a correct mating surface. This particular approach is combined with a custom patient-specific resurfacing implant that can be bicompartmental or unicompartmental for a total knee arthroplasty. Thus, the availability of patient-specific templates has boosted the use surgical robots for orthopedic surgeries, and this has been contributing to growth in the demand for orthopedic surgical robots over the years.

For more such actionable insights on the potential of the orthopedic surgical robots market, request a free sample copy.

Some of the additional questions addressed in this report on the orthopedic surgical robots market are:

For answers to all the possible questions required to gauge the performance of the orthopedic surgical robots market, get in touch with our expert analyst.

The research study on orthopedic surgical robots market addresses some of the key questions that would act in the best interests of the readers. Some of the crucial questions answered in the report are-

Heel Pressure Injury Relieving Devices Market is anticipated to account for over US$ 529.0 Mn, in terms of value, by 2026 end. The report on heel pressure injury relieving devices further projects significant growth potential through 2026..

Scoliosis Management Market is projected to register a CAGR of 3.6% during the forecast period due to various factors, regarding which the report offers vital insights in detail..

Revenue-wise, the analyst of the report has estimated that opportunities in the hip replacement market, across the world, will translate into US$9,128.5 mn by the end of 2024.