Market Study on Iodine: Application in X-ray Contrast Media to Be Prominent

Newly-released data on the iodine market reveals that global sales are expected to reach around US$ 1.43 Bn in 2022, registering Y-o-Y growth of approximately 5.7%. The market for iodine is projected to exhibit a CAGR of 4% over the period of 2022 and 2032 on a volume basis.

Iodine is used as a contrast agent in radiographic modalities. Iodine's high atomic number and density make it an ideal material for this application. Its presence in the body can help improve the contrast between tissues, blood vessels, and organs with similar X-ray densities.

Iodine is also widely used as a chemical catalyst in a variety of applications, including ketone synthesis and acid esterification. Iodine catalysts are used in the production of acetic acid and synthetic rubbers. For example, the carbonylation of methanol with hydrogen iodide as a catalyst produces nearly 75% of acetic acid used in the chemical industry.

Growing adoption of iodine in the healthcare sector for medical imaging purposes and the wide usage of iodine to conduct catalytic reactions in chemical companies are propelling the growth of the iodine market across the world. These two applications of iodine account for around 40% share of the overall market.

Over the historical period (2017-2021), the global market for iodine witnessed year-over-year growth of around 4.1%. High demand from end-use sectors created a favorable macroeconomic environment for iodine manufacturers in the recent past. End markets, including chemicals, pharmaceuticals, and electronics, have witnessed substantial growth on a global level. Robust domestic demand for chemical- and pharmaceutical-based products has been a key factor responsible for the growth of the target market.

Significant growth in the pharmaceutical sector, enhancement in healthcare infrastructure, and an increase in the production of medicinal drugs and medicine are all anticipated to propel the demand for iodine over the coming years. Growing demand for raw materials and intermediates has been observed for the production of several medicines, which is benefiting iodine producers. Higher product awareness and commercialized production of iodine will also bolster market growth.

Iodine is also utilized to create polyvinyl alcohol polarizing films with iodine adsorbed for LCDs in electronic devices such as televisions, computers, digital cameras, and personal mobile devices. Polarizers are added to LCDs to increase the light contrast between the screen and the liquid crystals, increasing the LCD's visibility. Thus, increasing demand for televisions and computer screens, especially large-size screens, will provide decent growth opportunities in the market.

China, the U.S., India, Germany, and the U.K. lead the market as far as the consumption of iodine is concerned. As per this detailed study by Persistence Market Research, the worldwide iodine market is forecasted to expand at a value CAGR of 5.7% and reach a market size of US$ 2.49 Bn by the end of 2032.

Iodine is a key mineral for the production of the thyroid hormone in the human body. Since the human body does not produce iodine, the same can be consumed in various food items. Iodine deficiency can lead to the enlargement of goiter, mental retardation in children and infants, and other health issues.

Thus to overcome this deficiency, the most popular practice is to add small amounts of iodine to table salt, commonly known as iodized salt. Moreover, iodine tablets and syrups are gaining preference in developing regions, which, in turn, is fueling market growth.

Increasing research in healthcare has spawned interest in many new elements and possible materials that can be used for treatment and diagnostics. Iodine has gained popularity as its use in the healthcare industry is being explored.

Cancer has been a matter of concern for the scientific community for quite a while, and research on the treatment for cancer has only gained impetus in recent times. Radioactive iodine can be an effective type of treatment for cancer of the thyroid gland. This is due to the fact that radioactive iodine consumed through a drink or capsule is absorbed into the body and picked up by thyroid cancer cells even if they have spread to other body parts. This radiation then goes on to destroy these cancer cells.

This new development can bring revolutionary changes in the way iodine is used in the healthcare industry.

Iodine is widely used as a catalyst in chemical reactions, as a contrast agent, as an absorber in electronics, and as a disinfectant. Thus, to minimize the depletion of natural resources through processes such as the extraction of nitrite ores from the Earth’s crust, iodine recycling is gaining preference in Chile and Japan.

Iodine recycling is expected to increase in the near future mainly due to growing concerns about sustainability in the iodine production process. Moreover, most of the iodine recycling volume is expected from electrical and electronic equipment waste, especially from LED/LCD polarizing films.

Thus, the shifting preference toward sustainability and increasing focus on iodine recycling, especially in emerging economies, are expected to provide ample growth opportunities to well-established as well as new players manufacturing iodine. 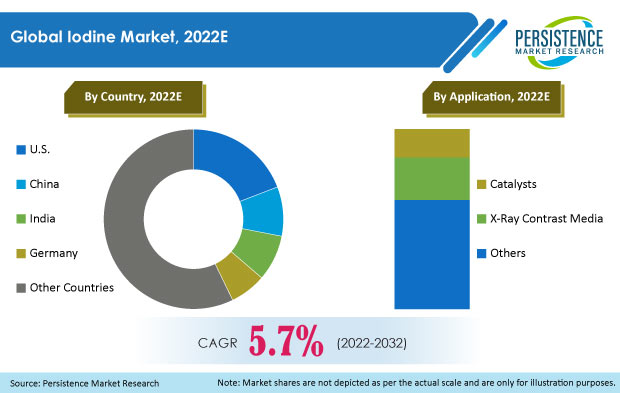 Image indicates market share of iodine in 2022 based on country and application. Based on applications, the X-ray contrast media segment is estimated to hold the highest share in 2022.

Why the U.S. is a Key Market for Iodine Suppliers?

The U.S. is expected to make an important contribution to the consumption and production of iodine across the globe. The country is estimated to hold a share of 18% to 20% of the global market in 2022.

A significant increase in the demand for iodine from various end-user industries is the key factor for the growth of the market in the country. Increasing usage of iodine as a sterilizing agent is one of the prominent factors bolstering the U.S. iodine market.

Iodine is considered one of the oldest antimicrobial agents owing to its high affinity for protoplasm, where the molecules oxidize proteins and interfere with vital metabolic reactions. Thus, iodine is considered a potent germicide with low toxicity to tissues and a wide spectrum of activity.

Owing to increasing governmental regulations and rising demand for iodine as a disinfectant and sterilizing agent, the U.S. market is expected to witness steady growth during the forecast period.

What is the Consumption Outlook of Iodine in China?

For instance, increase in the sale and production of consumer electronics such as LED/LCDs has added fuel to iodine demand growth. It is expected that the market for iodine in China would expand at a high rate during the forecast period, expected to be 6.4%.

Which Source of Iodine is Expected to Remain Prominent?

Based on source, the natural brines segment accounts for a major share of the global market in 2022 and is expected to continue this trend during the forecast period. The segment is expected to expand at a growth rate of 6% and create an absolute dollar opportunity of US$ 610.5 Mn by the end of 2032.

The nitrite ores segment is expected to be the fastest-growing segment in the market during the forecast period. The segment is expected to hold a share of around 35% to 40%. Increase in the production of iodine from caliche ores, especially in American countries such as Chile, is a key factor behind rapid segment growth.

Which is a Key Consuming Segment of Iodine?

Based on application, X-ray contrast media remains a prominent segment in the market for iodine end use. The segment accounts for a share of around 20% to 25% and is expected to expand at a CAGR of 6.1% in terms of value.

Iodine is widely adopted by chemical industries to conduct catalytic reactions in organic chemistry as it is environmentally stable. Due to its cost-effectiveness, the demand for iodine is rapidly increasing as an alternative to transition metals used as catalysts in chemical reactions. This is thereby driving the demand for iodine to be used in catalyst applications across the globe.

Prominent iodine suppliers are looking to expand their production capacities to cater to the growing demand from various end users. Further, to enhance their market dominancy, they are entering into long-term supply agreements to increase their consumer base. Several manufacturers are shifting their focus to iodine recycling as well.

Similarly, other key developments related to companies manufacturing iodine have been tracked by the team at Persistence Market Research, which are available in the full report.

What is the global valuation of the iodine market in 2022?

What are the main factors driving demand for iodine?

Growing use of biocide as a sterilizing agent, high demand from end-use sectors, increasing use of iodine as a contrast imaging agent, and rising prevalence of thyroid disorders among the aging population are expected to drive market growth.

What is the expected consumption outlook of iodine through 2032?

Worldwide consumption of iodine is projected to increase at 4% CAGR during the period of 2022 and 2032 on a volume basis.

What are the key trends being witnessed in the global market?

Increasing iodine production capacity, long-term supply chain agreements between manufacturers and end users, and shifting focus on iodine recycling by key players are being witnessed in this industry.

Which 5 countries drive most of the demand for iodine?

China, the U.S., India, Germany, and the U.K. account for most of the demand for iodine.

Which countries are key producers of iodine?

Chile, the U.S., and Japan are major producers of iodine.

What is the consumption volume of iodine in the U.S.?