Antibiotic resistance (ABR) happens because of excess and uncontrolled use of antibiotics. Most antibiotics are sold as over-the-counter drugs, with many people using them without getting prescriptions from a physician. Also, most physicians, especially in developing countries, prescribe antibiotics for viral diseases without diagnosing the disease properly. All these factors eventually lead to the development of antibiotic resistance.

Antibiotics are easily available through pharmacies, and growing preference for online pharmacies is also increasing the accessibility of antibiotic resistance products from key players. Manufacturers such as Pfizer Inc, Dr. Reddy’s Laboratories, and Novartis, to name a few, have well-established distribution channels and manufacturing sites in both, developing and developed regions.

In its new study, Persistence Market Research offers insights about key factors driving demand for antibiotic resistance products. The study points toward Community Acquired Bacterial Pneumonia (CABP) and Complicated Urinary Tract Infection (cUTI) being the most common conditions needing treatment. Hospital pharmacies grab more than half of the market share, globally. The report also tracks global sales of antibiotic resistance drugs in over 20 high-growth markets, along with analysis of the impact of COVID-19 on the pharmaceutical industry in general, and the antibiotic resistance space in particular.

The COVID-19 pandemic has had a mixed effect on the antibiotic resistance market. Majority of supply of raw materials required for pharma preparations comes from China, and during the lockdown, because a disrupted supply chain, manufacturing at regional and local levels got impacted.

Despite this delay, stocked up antibiotics were utilized for treatment where COVID patients were seen to develop co-infections (bacterial with coronavirus). Demand for antibiotics was low during peak lockdown periods, but soon came back to normal once these lockdowns were eased and lifted.

Common etiologic pathogens such as Streptococcus pneumoniae, Mycoplasma pneumoniae, Staphylococcus aureus, Haemophilus influenzae, Chlamydophila pneumoniae, and respiratory viruses are the most prevalent pathogens, globally. But higher incidence rate of Klebsiella pneumoniae and the presence of Burkholderia pseudomallei are unique to Asia Pacific.

Antibiotic resistance poses a threat to people worldwide, and this has created large need for new approaches to solve the problem. Life sciences and healthcare industries need to collaboratively address this threat sooner than later.

Over the past 5 years, the global antibiotic resistance market expanded at a value CAGR of 3.1%, and over the next ten years, growth will be faster at a CAGR of over 4% through 2031.

How will better access to antibiotics aid market expansion?

Due to slowed development of new antibiotics, very few antibiotics are left to effectively treat infections caused by multidrug-resistant bacteria and still fewer, which are affordable in developing regions. Many developing countries may not be able to save adequate resources to fight ABR.

Access to diagnostics to determine disease management and self-medication are serious issues for Asia. One such plan - the Global Action Plan on ABR, is to improve access to affordable antibiotics and facilitate implementation of this component efficiently.

The global battle against ABR needs to consider engagement of Asian countries as the use of antibiotics is very high in this region.

What is the impact of industry collaboration on the antibiotic resistance market?

Consolidation in the market is attributed to activities such as strategic acquisitions and collaborations. This trend is observed mainly by prominent players in this space.

Why are approval and launch of novel therapeutics key to market growth?

Prominent pharmaceutical players are focusing on discovery and launch of next-generation antibiotics to treat ABR. This augmented accessibility of antibiotics in the market is expected to propel antibiotic resistance market growth. Adding to this, launches of generic products are growing stronger year on year, and are expected to increase antibiotic availability.

Melinta Therapeutics Inc., in 2019, received US-FDA approval of Baxdela™, which is fluoroquinolones antibiotic that exhibits activity against a broad spectrum of bacteria. Increasing investments in antibiotic resistance and development of novel pipelines are expected to favor growth of the antibiotic resistance industry over the forecast period.

How do government initiatives impact demand for antibiotic resistance products?

International associations of infectious diseases and the World Health Organization (WHO) are vigorously addressing the antibiotic resistance problem, and have increased awareness, diagnosis, and treatment of infections, especially multi-drug resistance infections.

CDC (Centers for Disease Control and Prevention) and the U.S. Department of Health and Human Services are collaborating with healthcare facilities to meet goals of the 2013 National Action Plan to Prevent Healthcare-Associated Infections.

The Australian government has strategically planned to combat ABR, which includes governing antimicrobial resistance initiatives and preventive measures to control ABR spread. Greater engagement in terms of investment to fight against resistance and incorporating proper usage and stewardship practices for the use of antibiotics will aid market expansion over the coming years. 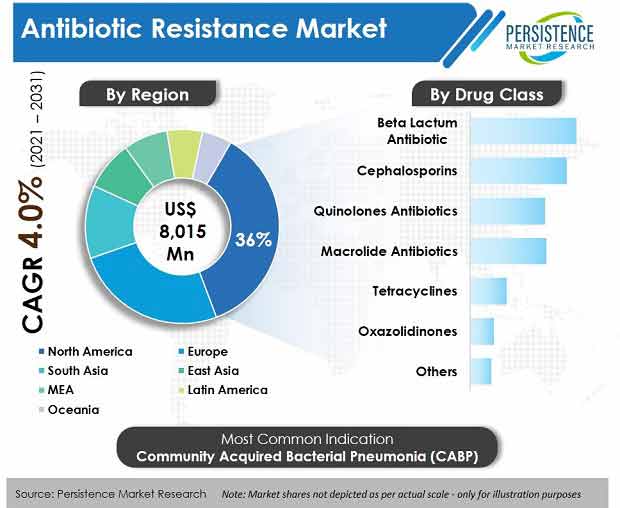 The main driving force behind the occurrence of ABR is selection pressure created due to consumption of antibiotics. Inappropriate use of antibiotics is extensive in South East Asia, and is a major contributor to the antimicrobial resistance market. Many countries in the South East Asian region now have some policies in place to deal with ABR, but most of them lack thorough implementation.

How will increasing incidence of ABR surge antibiotic resistance demand in the U.S.?

ABR infection incidence is expected to rise globally, and the U.S. can be considered a main center for ABR. Emergence of antibiotic resistance infections and increasing number of healthcare-acquired infections are increasing the patient pool in the United States.

What is the impact of growing contract manufacturing organizations on the Chinese antibiotic resistance market?

Recently, small and large pharmaceutical companies have become increasingly dependent on contract manufacturing and other raw material supplies. Majority of the raw materials for API manufacturing are procured from China. Large pharma companies based out of North America and Europe prefer to outsource their manufacturing capabilities. China is a preferred location in terms of cheaper resources and manufacturing workforce. For these reasons, China generates huge revenue from antibiotic resistance drug manufacturing.

How will the impressive presence of local pharma manufactures in India affect the antibiotic resistance market in the country?

Presence of some prominent players such as Cipla, Dr. Reddy’s Laboratories, Mylan N.V, and Zydus Cadila will create remarkable returns for the region. Presence of local players not only generates revenue for the country, but also increases the accessibility of drugs for the local people.

How is extensive development of antibiotic resistance impacting the Industry?

Manufacturers are focusing on the introduction of antibiotic resistance drugs in the market as growing demand for these products has been forced by increasing prevalence of ABR. Gepotidacin is a drug in clinical phase 3 targeted for  uncomplicated urinary tract infection (uUTI) / gonorrhea (GC). This drug is developed by pharma giant GlaxoSmithKline plc.

Entasis Therapeutics has a drug pipeline for ABR with two molecules in phase 3 for multidrug resistant acinetobacter infections and uncomplicated gonorrhea. MicuRx Pharmaceuticals, Inc. has a molecule called zoliflodacin for methicillin-resistant Staphylococcus aureus infections, in phase 3 clinical trial for launch in China. All these factors bode well for the expansion of the antibiotic resistance market size over the coming years.

With this, market players are also engaged in expanding their global and regional presence through acquisitions and creating awareness.

The global opioids market is expected to expand at a moderate CAGR of over 3% over the next ten years, and be valued at more than US$ 57 Bn by 2031-end.

The growth of the mitotane market can be attributed to the increased incidence of patient population, which is anticipated to grow significantly in the forecast period..