Over the past decade, India has witnessed notable increase in urbanization. As per the World Bank data collection of development indicators released in 2017, around ~34% of the Indian population resides in urban areas in India.

Rapid industrialization has resulted in increasing number of recreational projects, hi-tech smart housing projects, and several developments such as amusement and theme parks. Proliferation in aforementioned factors is expected to push the demand for golf carts during the forecast period.

Apart from India, China and the U.S. also contribute sufficiently towards the golf cart market growth owing to factors such as increasing urbanization and high disposable incomes of majority of the population. 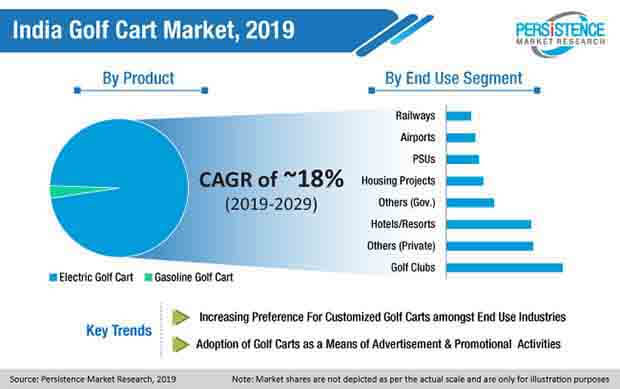 Golf carts are battery-operated vehicles, simple to manufacture, and offer a maximum speed limit of 31 Kmph, making them safe and favourable vehicles to be used at public places such as railway stations, airports, and tourist spots. Further, golf carts are easy to operate and do not require trained people to operate them. Also, golf carts fall under electric vehicles, which have power of less than 250 W and are generally not categorised as motor vehicles. Hence, no transport rules are applicable to golf carts in India.

Leniency in Governmental Regulations to Lift Production of Golf Carts

Mild governmental policies and regulations regarding manufacturing of golf carts have intensified the production of golf carts in India. Moreover, demand for customization in golf carts, such as addition of specific accessories, features or customization in accordance to end-use industries, for e.g., ambulance carts, patrolling carts, trash carts, and food carts has fueled market growth.

Demand in customization is due to factors such as increasing leisure activities by urban population, hype of an amusing lifestyle, and evolution in standards of livings.

This factor is expected to create heavy surge in the growth of the India golf cart market in the coming years.

Also, lead-acid batteries are relatively less efficient and require frequent recharging. Golf cart motor is another component with high maintenance requirement. These factors escalate maintenance costs to around 8–10% of the original golf cart price per annum and the cost increases significantly with replacement of parts.

As most golf carts in India are imported, end users have to bear high maintenance costs by hiring maintenance professionals. This restrains some end users from procuring golf carts.

Key indicators of market growth, such as value chain analysis and supply chain, compounded annual growth rate (CAGR), and year-on-year (Y-o-Y) growth of the market are explained in PMR’s study in a comprehensive manner. This information can help readers understand the quantitative development projections of the India golf cart market over the forecast period.

The study is relevant for stakeholders in the India golf cart market, including manufacturers, distributors, suppliers, and investors, and it can also help them understand applicable strategies to grow in the market. Stakeholders, investors, industry experts, researchers, and journalists, as well as business researchers in the India golf cart market can leverage the information and statistics presented in PMR’s research report.

PMR’s study on the India golf cart market is divided into three significant segments- product type, seating capacity, and end user. This report offers comprehensive data and information about the important market dynamics and growth parameters related to these categories.