Biodiesel is a renewable fuel produced from the transesterification of raw materials such as vegetable oil, animal oil, and used cooking oil. It is then used as a fuel that can power diesel engines. Also, corn oil, palm oil, canola oil, soybean oil, and jatropha oil are among the commonest raw materials for biodiesel.

Also, significant volumes of biodiesel are also produced from waste vegetable oil gathered from fast food outlets, restaurants, and food manufacturers due to low production cost. Growing crops specifically for biofuel is an industry that has huge potential, but current transesterification technology involves waste vegetable oil that is easily available and free, and requires far less processing to be converted into biodiesel.

In its revised study, market research and consulting firm Persistence Market Research offers insights about key factors driving demand for biodiesel. The report tracks global sales of biodiesel in 20+ high-growth markets, along with analyzing the impact COVID-19 has had on the electronics and automotive industry in general, and demand for biodiesel in particular.

In 1890, Rudolf Diesel designed a diesel engine that could run on a variety of fuels, including vegetable oil. In 1930, the technique of splitting fatty acid from the glycerin in vegetable oil in order to create thin fuel similar to petroleum came into existence.

Since 1992, biodiesel has been manufactured commercially across Europe. With time, dependency of countries on imported fossil fuel started reducing, and due to its non-polluting properties, governments of different countries issued mandates requiring the use of biodiesel.

The use of biodiesel instead of conventional fossil fuel is considered as a key point of action to reduce air pollution, worldwide. Scientists are researching for more cost-effective ways of producing biodiesel using different feedstock as per their accessibility and availability. Biodiesel is also known as 'green diesel' or 'renewable diesel', which is produced using conventional petroleum refining techniques.

With ongoing crisis caused by the COVID pandemic, manufacturing activities and logistic operations have seen a dip in the biodiesel market, but demand is anticipated to stabilize once the pandemic situation subsides and recovery of economic activities begins.

The COVID-19 pandemic has had a noteworthy effect on the global economy at different stages, and the impact is also seen on biodiesel demand. Automobiles and agriculture, the major end users of biodiesel, experienced downturn in 2020.

Furthermore, the market was affected by supply chain disruptions, shortage of raw material supply, and government. However, the long-term outlook remains stable, and Persistence Market Research expects the market to increase at 3% CAGR through 2031.

What is the Commercial Potential of Biodiesel?

Biodiesel is the future fuel of the transportation industry, which is paving the way for its market growth, globally. One of the most important advantages of using biodiesel in automobiles is that it burns in a much cleaner way than other fuels, and hence, does not produce any harmful chemicals, thus making it environment-friendly. Used cooking oil is also one of the growing feedstock segments, as it is cheap and easily accessible.

What is the Regulatory Impact on Global Sales?

Similar to the other transportation fuels, biodiesel is subjected to various regulations and norms. Benefits offered by the use of biodiesel include abundant availability, least impact on the environment due to its clean and harmless nature, and mandates regarding emissions.

Additionally, changing regulatory regimes and increasing focus on using high-percentage biofuel are propelling demand across regions. The choice of biofuel feedstock in a given country depends on different factors such as agronomic and climatic condition of the particular area, national eco political interests, etc.

Given cost competition concerns, various governments have mandated the use of certain percentage of renewable fuels so as to provide space for the technology to mature and attain parity with traditional fuels. 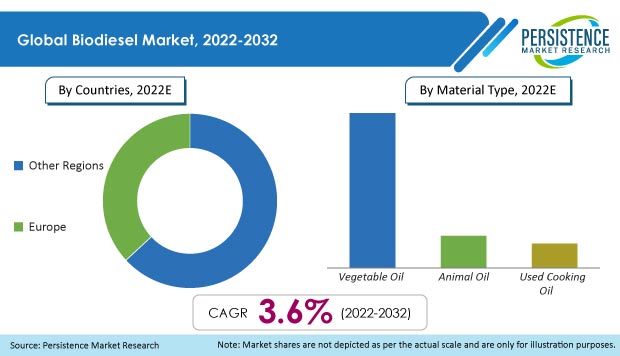 How Large is the Opportunity in China for Biodiesel?

China has a large economy, resulting in ever-increasing energy demand from its industrial and transportation sector. Also, China’s economy is growing rapidly, which results in growing contribution to the world’s total carbon dioxide emissions and increasing concerns over air pollution. Hence, growing demand for biodiesel at the global level is mainly driven by energy security concerns in China, which is propelling market growth in the country.

What is the Potential for Biodiesel in India?

Owing to the environmental benefits of biodiesel, it has been a more attractive market in recent years. Since India is lacking in the utilization of cooked oils, non-edible oil such as jatropha oil, etc., are the more preferred sources for production as these are made from renewable resources and can be produced locally.

Jatropha and other plants can be grown on wasteland, and it is observed that, around eighty million hectares of land is available in India. These crops grow in dry and semi-parched regions, and require no post plantation management and caution. Meanwhile, in India, almost all the wasteland is available in underdeveloped and rural regions; hence, large-scale production of biodiesel in such areas serves enormous potential for employment to the rural population and the development of such areas in the country, which also benefits the market for biodiesel.

How Brazil is Faring in the Biodiesel Market?

After the U.S., Brazil ranks as the world’s second-largest producer of biodiesel, and contributes to 25% consumption. In Brazil, consumption of biodiesel is mandatory, and that’s why most of the biofuel is destined for domestic consumption. Also, Brazil has different policies and has introduced a number of programs to promote the use of renewable energy in the foreseeable future, which is stimulating demand for biodiesel in the country.

How is Demand for Biodiesel Shaping Up in the U.S.?

The U.S. ranks as the number one producer of biodiesel in the world, and also one of the largest consumers. Environmental benefits of biodiesel, easy accessibility, and the federal Renewable Fuels Standard Program have majorly contributed to the growing demand for biodiesel in the country.

Here, biodiesel is highly used in the transport sector, such as in the fleets of school and transport buses, snowplows, military vehicles, garbage trucks, and mail trucks. Also, fueling stations of biodiesel are available in nearly every state of the country. Additionally, usage of low-level biodiesel is popular in the U.S. trucking industry because of its exceptional lubricating properties that benefit engine performance.

Which Feedstock Type if Biodiesel is Expected to Exhibit Lucrative Growth?

Biodiesel is a renewable fuel made from a variety of feedstocks, including vegetable oils, used cooked oils, and animal oil. Different qualities of biodiesel are produced from different feedstocks. Used cooking oil is one of the fastest-growing feedstock segments, as it is cheap and easily accessible. This segment will provide lucrative growth opportunities for biodiesel manufacturers over the coming years.

Which Production Process is Mostly Widely Used for Biodiesel?

Biodiesel is produced through a process called transesterification, which is one of the most popular production processes used. It is a chemical process that converts fats and oils into fatty acid methyl esters (biodiesel). This transesterification process results in two products -- methyl esters, which is the chemical name for biodiesel, and glycerin, which is a valuable byproduct usually used in the manufacture of pharmaceuticals and cosmetics.

Growing pressure of lowering carbon emissions and finding a replacement for conventional fuels has been making biodiesel more attractive in recent years. Biodiesel fuel is same as diesel but is very eco-friendly and a clean burning liquid fuel.

Biodiesel is a safe and non-polluting source of energy, which makes it a promising alternative for a greener future. It is the only alternate fuel that has been approved by the Environment Protection Agency (EPA). It has also passed every Health – Effects Test of the Clean Air Act, and meets the necessities of the California Air Resources Board (CARB), which make it much more economical than petrol and diesel as well.

The biodiesel market is a significantly competitive in nature, dominated by global players offering competitively advanced biodiesel-based products. Leading manufacturers are focusing on firming partnerships with major distributors and ramping up their existing production capacity due to increasing demand.

Companies are continuously focusing on innovation and developing new production methods that help them in reducing manufacturing cost and facilitate easy processing. Furthermore, companies have been channelizing efforts toward producing biodiesel from sustainable feedstocks such as used cooked oil (UCO) and vegetable oil. Companies are also collaborating with governments and automotive manufacturers to promote product sales.

The global microcrystalline wax market is estimated to reach US$ 1,102.3 Mn by the end of the forecast period while registering a CAGR of 3.9% for the period 2018-2026.