Business expansion is one of the prime strategies of enterprises to grow rapidly. Businesses are tuning to managed services for short-term tactical and long-term strategic considerations. The main component to be taken care of in expanding a business is safe communication, which can be implemented by a secured network. This factor is fuelling the adoption of virtual networking concepts, where enterprises can have a private international network to communicate and access data across all branch offices and subsidiaries, securely. Organisations are also adopting virtual networking solutions and services to monitor and manage their entire global and local communication networks centrally, which is further anticipated to expand the virtual networking market size over the coming years.

Consumers are moving toward the deployment of hybrid networks in their working environment. With increasing expansion of businesses, demand for flexibility in networks is increasing. This is driving service providers to design and implement networks that will be able to integrate different networks, such as Ethernet, multiprotocol label switching, Internet, and others, to cater to consumer demand and provide them with greater network scalability and flexibility. Therefore, service providers are delivering multiprotocol label switching (MPLS) IP VPNs (Virtual Private Networks) that will give any-to-any connectivity and fully-managed services, including monitoring of network and application performance.

Ease in Network Management to Spur Market Growth: Virtual networking enables end users to monitor and manage their company’s network, and provides complete access of the network. Solution providers help organisations by notifying users and managing the end-points of the network, in case of threat detection. Also, organizations can gain access to a portal where all network activities, such as service management, SLA management, network health monitoring, and performance reporting, are reported, which makes network management much easier. In addition, managed network services help enterprises in the optimum utilization of all resources, which increases the efficiency of enterprises. Thus, ease in network management is a significant factor anticipated to drive the growth of virtual networking market.

For instance, in February 2019, Vmware Inc. integrated its SD-WAN with ADVA Optical Networking and Telco Systems to deliver universal customer premise equipment (uCPE) solutions. Through this integration, it will be able to consolidate multiple services onto a single platform, and simplify the delivery and management of virtual services and applications.

Integration of Cloud and Managed VPN to Create Opportunities: Advancements in technology have led to innovation in the cloud. Factors such as scalability, mobility, flexibility, and high availability of data have led to tremendous growth in the cloud-based market. Increase in the number of cloud service providers creates numerous opportunities for virtual networking solution providers to integrate the cloud with their services, by entering into partnerships with these cloud service providers. These collaborations also help resolve the problem of cyber security threats and breaches, since virtual networking provides secure access to a network. 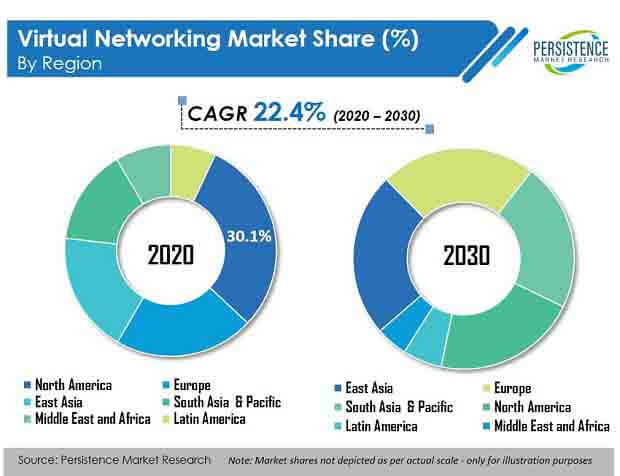 In terms value, North America accounted for largest virtual networking market share in 2019, owing to growing network infrastructure. However, the virtual networking market in South Asia and Pacific is anticipated to progress at the highest CAGR during the forecast period (2020-2030). Most enterprises in South Asia & Pacific need economical services and solutions for managing their enterprise networks. This has led to the wider adoption of services such as managed virtual private networks, which eliminates the cost of managing a network and reduces in-house IT costs significantly.

Although a majority of industries have been impacted by the COVID-19 pandemic, some of the IT solution and service providers are well positioned. Due to the lockdowns in many countries, the usage of social media, multimedia services, and mobile applications has increased significantly, which is further expected to propel the growth of the virtual networking market. Also, virtual networking solution providers are playing an important role in supporting enterprises, customers, and governments in these trying times. In such a situation, cloud-based virtual networking solutions facilitate a more rewarding customer experience, and are anticipated to grow significantly (5-10%) in the coming period. Players in the virtual networking market are rapidly responding to the economic and social impact caused due to pandemic. Owing to these factors, the market is anticipated to expand 3-4% in Q3 and Q4 of 2020.

A direct market overview provides the growth scenario and market potential with maximum precision, which is adjudged with suitable assumptions. The report features unique and relevant factors that are likely to have a significant impact on the virtual networking market during the forecast period. This report includes a detailed and considerable amount of information, which will help new manufacturers in the most comprehensive manner for better understanding.

A unique and promising research methodology forms the base of the virtual networking market report for the forecast period. The report has been prepared after comprehensive analysis of market happenings, and then, riveting insights have been compiled meticulously. The research methodology of the virtual networking market report has been a two-step process that comprises primary and secondary research. Key stakeholders such as virtual networking manufacturers, suppliers, and distributors have been interviewed, along with experts of several designations, including executive vice presidents, directors, service engineers, technical advisors, GM marketing professionals, and sales professionals.

Secondary sources referred to garner report findings include investor presentations of manufacturers, World Bank, and many other credible sources.