According to Persistence Market Research, adeno-associated viral vectors secured a market value of US$ 209.6 Mn in 2021.

Infectious diseases are illnesses caused by bacteria, viruses, fungus, or parasites. The growing understanding of virus biology has supported the development of therapeutic viral delivery vectors. As a result, viral vectors have emerged as one of the most effective gene delivery vehicles. Viral vectors are widely used for medicinal applications as well as basic biology research because of their particular properties.

Both in-vitro and in-vivo viral vectors can be used for the activation of cellular immunity and humoral responses because they mediate lasting and effective antigen expression and presentation in dendritic cells. As such, viral vectors are an excellent choice for vaccines against several malignancies and infectious disorders.

Furthermore, due to the increasing number of patients suffering from chronic and hereditary diseases, the demand for gene therapy is consistently increasing, which impacts viral vector manufacturing in a positive way.

Apart from gene and cell therapy, viral vectors are profoundly used in vaccine development. There are various characteristics of viral vectors that help in utilizing them as vaccine delivery systems as well. These include low pathogenicity, genetic safety, great efficacy in getting transferred to the dendritic cells, ability to induce long-lasting antibody-mediated immunity, and lack of integration in the host genome. Therefore, viral vectors can be easily used for expressing and presenting pathogenic antigens to induce an immune response by imitating a natural infection.

Why is Demand for Viral Vector Manufacturing Skyrocketing?

One of the major driving factors for viral vector manufacturing is the use of viral vectors in gene and cell therapy. Viral vectors are specially designed tools that help in effective gene transfer, which helps them modify specific tissue or cell types and can cause therapeutic effects. Viral vectors can favorably be used for delivering functional genes in the place of defective genes so that effective treatment can be provided to patients suffering from various genetic disorders. Viral vectors are also used for the development of vaccines, including COVID-19 vaccines, and this is one of the key drivers for the market.

During the anticipated period, there will be numerous lucrative opportunities for viral vector producers all around the world. Key players have several opportunities to grow their enterprises in emerging economies. The development of gene-modified cell-based therapeutics, notably T-cell therapies, has already benefited from viral vectors. Such vectors are also employed to deliver cloned T-cell receptors or chimeric antigen receptors (CARs) to mature T cells to induce anti-cancer immunity.

Are There Any Barriers That Can Affect Viral Vector Manufacturing in Any Way?

Other than this, the high cost of gene therapies is another factor that can restrain the demand growth for viral vector manufacturing over the forecast duration. 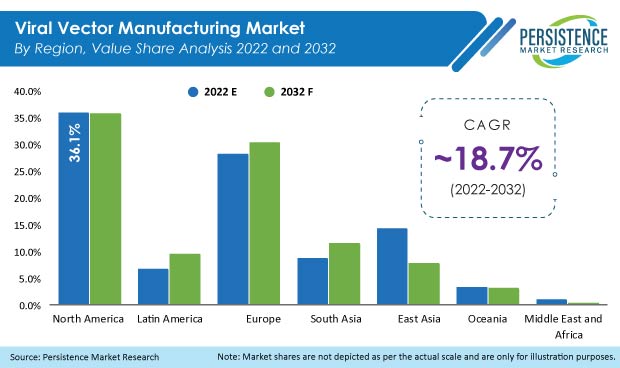 Why is the U.S. a Prominent Viral Vector Manufacturing Market?

“High Number of Industry Players in the U.S.”

The U.S. accounted for 92.1% share in the North American region in 2021 and a similar trend is expected over the forecast period as well.

The presence of various manufacturers such as ThermoFisher Scientific Inc., Waisman Biomanufacturing, Creative Biogene, Sirion Biotech GmbH, Charles River (Cobra Biologics), and others is quite high in the U.S. This has boosted the availability of viruses in the viral vector manufacturing space.

How is the U.K. Market Expected to Shape Up?

To find new cancer treatment options, researchers in the U.K. are continuously examining the use of lentiviral vectors for T-cell engineering. These retroviral vectors, which are a safe and efficient approach for gene transfer, have been used in many of the development procedures necessary for the current advancement of CAR T cell therapy. As a result, the market for viral vector manufacturing in the United Kingdom is growing rapidly.

Why is China Emerging as a Prominent Market for Viral Vector Manufacturing?

“Expansion of Manufacturing Units in China”

The growth of medical infrastructure and collaborative strategic planning for expansion are key factors that will favorably affect viral vector manufacturing in China.

The adeno-associated viral vectors segment held 38.9% share of the global market in 2021. These are quite effective with respect to gene therapies and thus hold a dominant market share.

The transduction of a large range of cell types is possible using these viral vectors, including both dividing and non-dividing cells. Additionally, post the in-vivo gene delivery process, a long-term expression of that of transgenes can be obtained using these vectors. These factors have made adeno-associated viral vectors an important tool for gene therapy.

Which Expression System is Most Popular in the Market?

A stable expression system implies a stable, large-scale synthesis of recombinant proteins. Stable gene expression is mostly preferred as it allows for the large-scale manufacture of therapeutic antibodies because it provides better process consistency and control over the quality of the final product.

Which Application Benefits the Most from the Employment of Viral Vectors?

Patients are inclined toward the adoption of gene therapy for the treatment of various genetic disorders and cancers. Various research activities have proved the potential of viral vectors in the delivery of gene therapies – efficiently and safely. Furthermore, factors such as the large capacity of packaging, cell type infection at large quantities, and efficient transduction capability have all supported the usage of viral vectors in gene therapy.

Major viral vector producers are concentrating on strategic alliances, product launches, and acquisitions to increase their market presence. Apart from this, one of the key strategies of manufacturers is expansion - the opening of new facilities to expand their viral vector manufacturing capability.

The U.S., China, U.K., Japan, and Germany account for the highest share of viral vector manufacturing, currently at 57.7%.

Germany accounted for 18.8% share of the European viral vector manufacturing market in 2021.

The European market is predicted to expand at 19.5% CAGR over the forecast period.

China held a share of 48.2% of the East Asia viral vector manufacturing market in 2021, while the market in Japan is set to grow at a CAGR of 11.2% over the forecast duration.

Current value of the South Asian market is US$ 47.6 Mn.