The global lentiviral vectors market was valued at US$ 127.6 Mn in 2021, with a projected CAGR of 11.4% for the next ten years, which indicates highly positive market growth. Detailed industry analysis reveals that revenue from sales of lentiviral vectors will surge to a market valuation of US$ 411.2 Mn by the end of 2032.

According to Persistence Market Research, kits, as a product segment, enjoyed a market value of US$ 91.6 Mn in 2021, accounting for nearly three-fourths of the global market share. Consumption of lentiviral vectors accounted for 20.1% share of the global viral vectors manufacturing market, which was valued at approx. US$ 636 Mn in 2021.

Due to their great efficacy in transferring dendritic cells and inducing long-lasting antibody-mediated immunity, CD8+ T cells, and excellent protection in a variety of preclinical animal models of infection and malignancies, lentiviral vectors have emerged as strong vectors for vaccination purposes.

Creation of medical lentiviral delivery vectors has been aided by increasing understanding of lentivirus biology. Lentiviral vectors have thus become one of the most efficient gene delivery vehicles. They are frequently used for therapeutic purposes as well as fundamental biology research due to their unique features.

Lentiviral vectors have been utilized to mediate long-term and effective antigen transcription and delivery in dendritic cells, resulting in the activation of cellular immunity and humoral responses in both, in vitro and in vivo studies.

Viruses have evolved to be extremely efficient at delivering nucleic acids to specific cell types while avoiding detection by an infected host's immune system. Viruses are promising gene-delivery vehicles or vectors for gene therapy because of their features. Several viruses have been modified in labs for use in gene therapy applications, including retrovirus, adenovirus, adeno-associated virus (AAV), herpes simplex virus, and lentivirus.

Since the mid-1990s, lentiviruses have been widely utilized as gene delivery vectors. They mediate effective gene transfer to non-dividing cells, such as neurons and glia in the adult mammalian brain, and are usually derived from the human immunodeficiency virus genome. 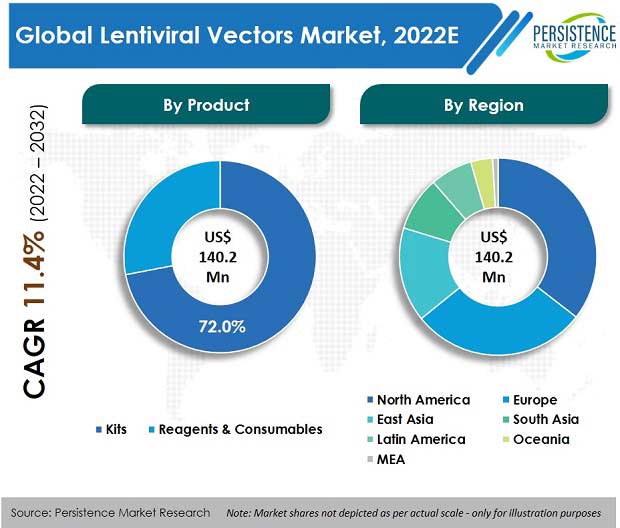 Many attractive prospects for lentiviral vector makers around the world are expected during the predicted period. Emerging economies provide key players with numerous opportunities to expand their businesses.

Lentiviral vectors have changed and evolved with CAR T-cell therapy, and they are now demonstrating their full usefulness as an alternative therapy and a potent, supplementary tool in the treatment of a broader range of malignancies.

What Can Slow Down Demand for Lentiviral Vector Products to Some Extent?

By replacing a genetic defect or adding a new gene, gene therapy aims to cure an illness or improve the body's ability to resist the disease. Gene therapy could help people with heart disease, cancer, cystic fibrosis, AIDS, haemophilia, and diabetes, among other disorders.

The cost of gene therapy is at the heart of the problem. Drug prices are controlled and subject to existing legislation in many countries; however, gene therapy pricing is mainly unregulated and determined on a case-by-case basis, with focus on a single upfront payment.

Drug makers examine development costs, specific characteristics of the condition, and associated expenses such as hospitalizations and lost productivity that might possibly be avoided by reducing the disease burden when deciding the price.

Prices for gene therapies are also influenced by lack of competition, with only a few companies developing gene therapies for rare diseases, as well as the fact that only a small number of patients can benefit from a given treatment, resulting in a situation where profits from a small number of doses must cover the entire drug development and manufacturing costs.

Why are Lentiviral Vector Providers Targeting the U.S. Market?

“Strategic Acquisitions & Mergers between Industry Players High in the U.S.”

In terms of value, the U.S. accounted for 82% of the North America lentiviral vectors market. High market share is due to the existence of major players in this industry in the U.S., which increases the availability of products in the country.

Key players are focusing on strategic acquisitions and mergers, which is boosting the growth of the market.

How is Consumption of Lentiviral Vectors Shaping Up in the U.K.?

“High Level of Research Activities Ongoing in the U.K. for Cancer Treatment”

Researchers in the United Kingdom are constantly investigating the use of lentiviral vectors for T cell engineering in order to discover cancer therapeutic options. These retroviral vectors have been used in many of the development processes required for the current advancement of CAR T cell treatments, and are a safe and effective method for gene transfer.

As a result, the market for lentiviral vectors is expanding rapidly in the U.K.

Why is China Emerging as a Prominent Market for Lentiviral Vectors?

Rapid development of medical infrastructure as well as strategic planning to collaborate for expansion are crucial variables that will help this industry flourish in China.

Sales of Which Product are High in the Lentiviral Vectors Market?

“High Demand for Lentiviral Vector Kits across the World”

The kits segment amongst all products accounted for the highest market share of 71.7% by revenue in 2021.

Expression kits, for example, allow the development of a homologous recombination HIV-1-based lentivirus, which is used for delivering and expressing a gene of interest in dividing or non-dividing mammalian cells. As a result, they are frequently used in research, assisting in the expansion of the lentiviral vectors market.

Which Disease Indication Benefits the Most through the Employment of Lentiviral Vectors?

“Lentiviral Vectors Most Commonly Used for Treatment of Cancer”

The cancer segment, by indication, is driving demand in this market and accounted for more than 65.4% market share in 2021.

Lentiviral vectors have been helpful in the formation of gene-modified cell therapies, particularly T cell therapies. In order to create anti-cancer immunity, these vectors have also been used to convey chimeric antigen receptors (CARs) or cloned T-cell receptors to mature T cells.

Companies are entering into mergers and acquisitions to expand their product portfolios and market presence globally.

How large is the global lentiviral vectors market?

What is the sales forecast for lentiviral vectors through 2032?

The lentiviral vectors industry is set to witness a high growth rate of 11.4% over the forecast period and be valued at US$ 411.2 Mn by 2032.

At what CAGR did demand lentiviral vectors increase over the past 5 years?

The market expanded at 9.2% from 2017 through 2021, as lentiviral vector devices are highly preferred by healthcare professionals for research activities.

Who are the key players manufacturing lentiviral vectors?

Which product of lentiviral vectors is driving market demand?

Which are the top 5 countries driving highest demand for lentiviral vectors?

The U.S., U.K., Canada, Germany, and China are expected to drive most demand growth of lentiviral vector products.

What is the U.S. market outlook for lentiviral vectors?

At what percentage is demand for lentiviral vectors expected to register growth in Europe?

The Europe lentiviral vectors market is expected to record a CAGR of 12.1% over the forecast period.

Which countries are key producers of lentiviral vector products?

The U.S. and U.K. are major manufacturers of lentiviral vector kits.

How are China and India faring in this market?

The China market holds a share of 37.1% in the East Asia lentiviral vectors market, whereas India accounted for 40% of the South Asia market share in 2021.